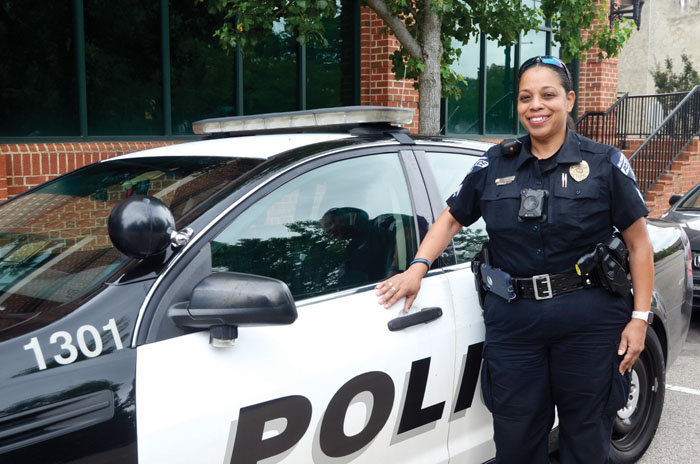 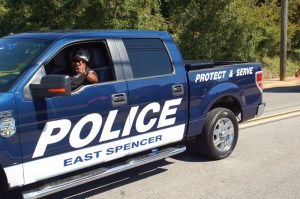 The Salisbury Post set out to answer the question of what it means to be a Black law enforcement officer in America right now.

The Post reached out to multiple law enforcement officers and agencies and received two responses — from Salisbury Police officer Shanita Millsaps, who is a school resource officer at Knox Middle School, and East Spencer Police Chief Sharon Hovis. Below are their answers to a series of questions.

No. 1: Tell me why you became a law enforcement officer.

Millsaps: “I feel that it’s kind of hard for white officers to really understand and go into Black communities to get the answers or get any kind of respect sometimes,” she said. “I wanted to be able to go in so I can be that person or that Black officer that they know they can trust. They know that I’m going to be real. The information they sometimes give me they don’t give other people.”

Millsaps has been in law enforcement for 26 years, with 20 of those years being with the Salisbury Police Department.

“The officer stated he did not believe me and detained me until he called for another unit. The arriving officer identified me and stated I did in fact live in the neighborhood. He informed the officer my family was one of the few (two Black families) that lived in the community,” Hovis said.

The good encounter came from when a Black officer played basketball with neighborhood kids and would ride through the neighborhood while also making time to stop, sit and talk with them.

Hovis is a 15-year veteran of the Army and Army National Guard and has been in law enforcement for more than 20 years.

Question #2: Have you experienced racism in and out of uniform? If so tell me about that experience.

Millsaps: “When I first started on patrol, I still remember I was stopping a car. I was only stopping the car because his tag was out. It was only a couple of days out,” she said. “It was an older white man. I was just going to give him a verbal warning and say, ‘Hey, your tags are out.’ When I pulled him over, the first thing he did was jump out of the car and said, “Why are you pulling me over.”

Millsaps said she asked the man to return to his car, but he continued to question her and be disrespectful as she asked for his license and registration.

“I was going to give him a verbal warning, but instead I gave him a ticket,” she said.

“One time, I was out of uniform and was walking around JC Penney’s. I was looking for some stuff, but there was a white female and a white male walking around,” she said. “I’m watching these two stealing. The employee kept watching me everywhere I was. … I pulled out my badge and said ‘I’m doing the same thing you’re doing. You probably need to check those two who are stealing. Her expression on her face changed. She turned to go to them.”

Hovis: She said she feels as though experiencing racism is the nature of being born with a different skin color.

“It becomes a way of life where you to get used to being looked upon differently,” Hovis said.

She added that it did not stop her from accomplishing anything in life, whether she was the only Black female on the job in law enforcement or in the military.

“I have always used adversity as a push towards moving forward to get things done,” she said.

Hovis said she feels the way a person thinks or feels about his or her skin color or gender “is their cross to bear.”

“I believe that is their problem but it will not be mine,” Hovis said.

“At that time, it was hard, dealing with Salisbury itself and Rowan County. It was different,” Millsaps said.

She’s originally from Statesville. She worked at the Rowan County Sheriff’s Office at a time when the Klu Klux Klan marched along Main Street.

“That was different for me to see. Just being an African-American here in Salisbury, I feel honored,” she said.

Millsaps said it makes her feel good to talk to people who say they’re also happy to see a Black female officer working at the Salisbury Police Department.

Hovis: “That means a higher standard and double the work — improving and proving yourself to others,” she said.

Hovis said she works to show that skin color doesn’t matter when we are all a part of this world.

“Most of all, we must respect each other — under an oath or a moral code, but most of all under God’s guidance,” she said.

She’s reminded of the song, “This Land is Your Land,” because of the lines that say, “This land was made for you and me.”

Question #4: Do you feel pitted against your identity as a Black American and your duty to your job? How so?

Millsaps: “Yes, sometimes, because of what we went through with protesting and what happened with the murder of Mr. George Floyd,” she said.

“We’ve helped so many and you’ve done so much but then you have those same ones who are out there expecting you to be this way and not be an officer,” Millsaps said, recalling the conversation. “They have to understand, ‘I’ve got to stand in the middle. I’ve got to be an officer, but also I’m Black.’ So, I have to look at the other side. It was hard that some people didn’t understand. What has helped me so much is the community.”

Millsaps said she feels as though what’s helped her be a trusted face in the community is building a house in a “drug area.” There have been shooting incidents near her home. Because she was known in the community, Millsaps said, once a shooting victim ran to her house for help.

Hovis said it’s important to be a professional, especially during an arrest. She said officers should remember the safety of the person that being detained and safety of themselves.

“There should not be one officer that wants to hurt or kill anyone — good guy or bad guy(s) — everyone needs to go home at the end of the day,” Hovis said.

Question #5: How do you personally work to build trust in the Black community/the community at large?

Millsaps: “Do the same — treat everybody as if they were the same and that, to me, makes a difference when somebody sees me,” Millsaps said.

She shared a story of a white man that she saw at Walmart. She’s been helping give out food to students, in part, so she can see her students. But she’s also doing her part to help in the community. She gave some extra food to a man who was homeless. And Millsaps recalled the man saying, “Aren’t you the officer that works at the shelter?”

A woman and her daughter spotted that act of kindness and thanked Millsaps for what she’d done.

Millsaps said she was appreciative of their kind words and wants to always do things for others whether someone is watching or not.

Hovis: “Trust works through communication and being seen. The community likes to see the chief of police out on the street and driving through neighborhoods. I’ve always thought a good leader is one who doesn’t just delegate. They’re in the trenches with the troops.”

Hovis said there’s a benefit to being involved, too. It is where familiarity and trust begins, she said.

“It is also a necessity to keep your ear to the ground on what’s going on in the neighborhood,” she said. “I’m a big advocate for community relations. That’s where the respect comes from, it tends to cycle its way into a healthy community. … Also, treat people the way you want to be treated; when you say something, then follow up with it. But most of all, care about your job.”

Question #6: What discussions have you had with family, friends or fellow officers following the death of George Floyd, protests abroad and protests here in Salisbury?

Millsaps: “Even with me being a black female officer and being a mother of three black males, I’ve had to have a discussion with my sons about wearing dreadlocks,” she said. “I had to tell one of my twins, he was so angry about this, I had to tell him, ‘If an officer stops you, be courteous, please do what they tell you to do’ because I’m afraid for my kids and other people’s kids.”

Hovis: She said the death of George Floyd was, “truly a heart-sickening wrinkle in time and something this country is now handling.”

Hovis said she’s worked for many years to fight the misconception that all police are badge-heavy or bullies.

“Images and situations such as what occurred in Minnesota, Atlanta, Texas, etc. are keen examples of why I became who I am,” Hovis said. “Most of all, it dampens the very fabric of woven work as it pertains to community relations.”

Hovis said her first objective when she responds to an incident is to deescalate the situation. She’s also a proponent of diversified hiring practices so all agencies can reflect their communities whether through gender or race.