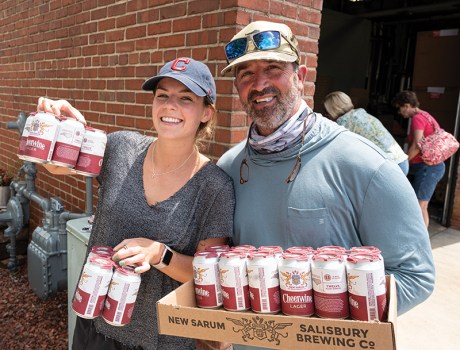 Josh Bergeron / Salisbury Post - Bailey Herndon, left, and her dad Mike were two of the hundreds of people who lined up for some Cheerwine Lager from New Sarum Brewing on Friday. Bailey joked that her mom, Carol, would be proud of them.

Josh Bergeron / Salisbury Post - Hundreds of people lined up Friday afternoon to get their packs of New Sarum’s Cheerwine Lager. The brewery made a larger batch than it did for this year’s Cheerwine Festival and drew a much larger crowd, too. 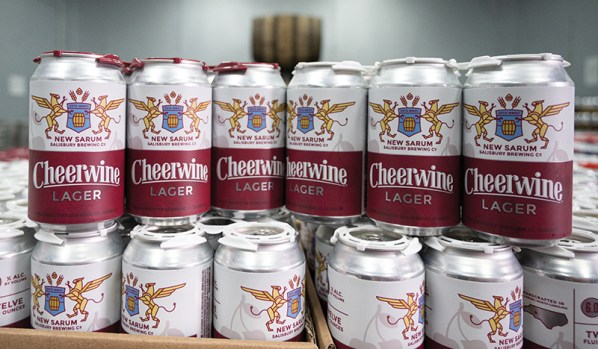 Josh Bergeron / Salisbury Post - New Sarum Brewery made hundreds of cases of its popular Cheerwine Lager to sell on Friday and drew a crowd of hundreds, too. 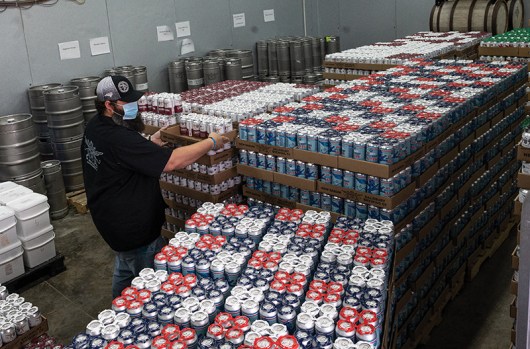 SALISBURY — A line of hundreds wrapped around the block at New Sarum Brewing on a sunny Friday in downtown Salisbury, with everyone waiting to get their hands on a batch of the popular Cheerwine Lager.

And the cherry on top was a $4 donation to the Rowan County United Way COVID-19 Relief Fund for every six-pack sold.

Due to such high demand for the brew, planning for another release of the lager began days after the virtual Cheerwine Festival on May 16. That release included 1,100 crowlers, totaling eight barrels of beer, which was twice the amount concocted for last year’s Cheerwine Festival. As the demand has continued to grow, Friday’s batch of 30 barrels was almost three times more than the last batch.

While ales can be concocted in 14-18 days, lagers take up to six weeks, which makes releasing more Cheerwine beer difficult, as New Sarum isn’t “just getting Cheerwine syrup and adding it to the beer,” Maben said.

Using local ingredients is important to New Sarum, and so is keeping money in the community.

“We have the ability to try and help out as much as we can,” Maben said as he was on his way to Patterson Farm for strawberries that’ll be used in a future brew. “We’re a community-driven brewery. It’s super cool to be able to team up with other like-minded individuals.”

Maben said the brewery serves as a vehicle to help others in the community.

A previous initiative from New Sarum was the selling of “RoCo Strong” T-shirts in early April, which amounted to a $3,000 donation to the county COVID-19 relief fund. After Friday’s batch, the brewery will have donated almost $10,000 to helping with the pandemic here in the community.

Maben said Friday’s Cheerwine lager release should have, hopefully, given people a little bit of relief with everything going on right now. On the brewery’s Facebook announcement of the re-release, one of the “house rules” was to be kind to each other. By that, Maben said, New Sarum asked community members to do their part in controlling the spread of COVID-19 and to just be nice to others, especially with all the tension being experienced across the nation at this time.

“It should be a fun experience,” Maben said. “And if that doesn’t bring people together, then I don’t know what will. If you can’t be kind, then what are we doing?”