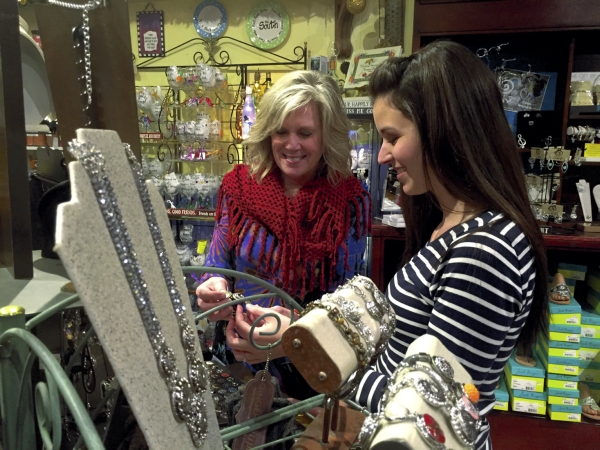 Salisbury Post file photo - Pam Coffield, left, owner of The Stitchin' Post Gifts in downtown Salisbury, said she tries to provide her customers with a pleasant experience and unique merchandise.

SALISBURY — Downtown Salisbury Inc. is Main Street America accredited, and each year the organization nominates people for awards at the North Carolina Main Street Conference for their efforts to make downtown better.

In its 40th year as a Main Street Community, Downtown Salisbury Inc. takes a holistic approach to economic development that makes incremental improvements in areas — ranging from business recruitment to downtown appearance and functionality like having enough benches and lights placed.

When choosing award nominations, DSI Director Larissa Harper said the organization looks for people who have put their time and passion into helping downtown be a great place for residents and visitors. DSI chooses one to designate as a Main Street Champion.

This year’s designee is Pam Hylton Coffield. The Stitchin’ Post Gifts owner is going into her 45th year in business downtown. She has had to reinvent her business over the years from a small retail shop for cross-stitching to the contemporary store selling a variety of high-quality goods.

Coffield has also been a city council member and served on the DSI board. Harper said other downtown business owners look to Coffield as a mentor.

In July and August, DSI looks at different rehabilitation projects ranging from interesting new events, old standbys, public-private partnerships, historic preservation or appearance to nominate to submit to the state for an award.

“If they’ve done something really magnificent in the last year we would look at nominating those folks,” Harper said.

The state Award of Excellence for Best Adaptive Reuse went to Michael and Diane Young’s development of the O.O. Rufty Building along with architect Pete Bogle.

Harper praised the project in the building, which had suffered damage from a fire and has been transformed into residential, commercial and storage space. The Youngs have preserved historic features like original hardwood floors. The building hosts the retail business Hive.

“That is the total definition of a mixed use rehabilitation of historic property,” Harper said.

The public-private partnership of DSI and the city of Salisbury were named on the award for the Young’s property due to investment into a catalyst project for the 100 block of East Innes Street.

Diane Young said their family was excited to save an iconic structure in their hometown. The project used funding from F&M Bank, a local architect and mostly local suppliers and subcontractors.

Harper was in attendance to receive the awards for DSI and the City at a ceremony in New Bern.

“I was honored to accept the award on behalf of DSI and the City and very proud to stand beside Michael and Diane Young as these hard- working visionaries received a statewide award for their efforts.” Harper said.