Weeks of discussion, collection of locals made relocation proposal happen 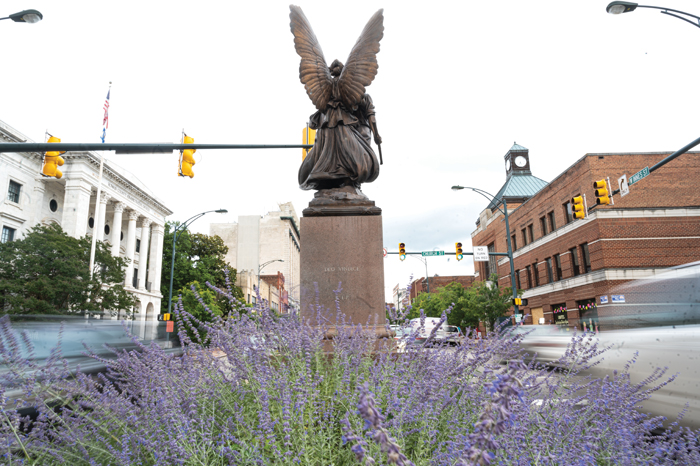 Josh Bergeron / Salisbury Post - Cars drive by ‘Fame.' The Salisbury City Council has voted to relocate the Confederate monument. On the rear of the monument is an inscription that says ‘Deo vindice,’ the national motto of the Confederate states.

SALISBURY — City officials say the final agreement to relocate the “Fame” Confederate statue required weeks of conversations in the community and it included several moving parts.

And though the Salisbury City Council on Tuesday voted to relocate of the statue to the Old Lutheran Cemetery, a deal isn’t final until the Robert F. Hoke chapter of the United Daughters of the Confederacy signs the same agreement within 10 days. Otherwise, the city could remove it from its current position in July without a relocation plan. Mayor Karen Alexander said on Wednesday that the city attorney was preparing the formal agreement to be mailed to the UDC for its signature.

The relocation agreement states the city will cover the costs of the relocation and the placement of the statue on its new foundation. The city will give the UDC full ownership of the new site in the Old Lutheran Cemetery. From there, any repairs or maintenance becomes the responsibility of the UDC.

If the UDC doesn’t sign, the city, by declaring it a public safety hazard, is authorized to remove the statue from its current location and store it for no more than 90 days. The resolution states that the UDC will have until July 16 to relocate the statue, but the proposed relocation agreement would take care of that issue.

Salisbury Communications Director Linda McElroy said conversation about the relocation proposal began June 1 — the day after gunshots were fired into the air at the site of the statue during a protest downtown. It was one of many protests in the community to say “black lives matter” and honor George Floyd, who died after a Minneapolis police officer kept his knee on Floyd’s neck for several minutes.

The proposal was community-led, and both McElroy and Alexander said some of the members involved in making the agreement happen wish to remain anonymous. But one of the community members involved in facilitating the proposal is Ed Norvell, who said he was approached by city officials on June 8. Norvell said the mayor requested he privately raise funds to cover the costs of the proposed site amenities.

Some of the site amenities, Norvell said, will include an 8-foot-high wrought iron fence erected around the monument as well as security cameras to ensure the statue is preserved and protected.

From there, Norvell reached out to local historic groups and was able to raise the $55,000 that had been estimated to cover the cost of the amenities.

“Literally within 24 hours, we raised the funds to pay for that,” he said, adding that the efforts to raise the money was in good faith that the UDC would agree to the proposal. “This is a critical part of this arrangement.”

While Norvell didn’t have direct contact with the UDC, he was familiar with the current descendants of the original daughters who erected the statue in 1909. He said Councilman David Post encouraged a conversation with those descendants as their statements and opinion could be powerful.

Norvell echoed the power of those conversations. He said the descendants agreed that it was time for the statue to be moved due to the flashpoint it had become in the community. He added that during the “lively conversation” they agreed the statue’s location was a “bad message,” particularly because of its proximity to the entrance of what will be the Bell Tower Green Park.

Additionally, Norvell said, representatives from the UDC who were involved in the proposal were afraid to reveal who they were out of fear of retaliation from any pro-Confederacy groups.

The current president of UDC, Norvell said, met with one of the local historic groups on June 10 to discuss the agreement. This was productive, or “miraculous,” as Norvell said, because the UDC has been unresponsive to members of the community who have reached out to the chapter over the last few years.

Following those conversations, Norvell said he spoke with several black local residents and leaders in the community, including NAACP President Gemale Black, who Norvell said thought the move was a good idea.

Black echoed those comments in a live-streamed conversation after the council’s vote Tuesday night, saying he felt that the city was moving in the right direction and that he was grateful for the coalition of people who had advocated for the relocation.

Aaron Kepley, executive director of the Rowan Museum, said he personally helped facilitate some of the conversations regarding the proposal after being approached by community members early last week, adding that he wanted to ensure the agreement “happened in a way that included everyone.”

Kepley said he served as another “conduit” between the community members and the UDC.

Councilman Post said the council was notified on Thursday, June 11 that a drafted agreement was close to being confirmed with the UDC. The following morning, council members were presented with the draft agreement that had been proposed to the UDC.

In the agreement, the Historic Salisbury Foundation serves as the fiduciary agent to oversee the funds raised for the site amenities, which means the foundation won’t solicit any funds and instead collect and hold the money.

Sada Stewart, director of the Historic Salisbury Foundation, said the foundation was approached by city leaders toward the end of last week as the agreement required a nonprofit entity to hold the funds.

The relocation proposal states the mission of HSF — to “preserve, protect and revitalize the historic fabric of Salisbury and Rowan County.”

“The Historic Salisbury Foundation desires that the history of Salisbury and Rowan County be preserved and appropriately, respectfully, fully and accurately displayed,” the relocation proposal states.

Ultimately, Stewart said, she hopes the final result is “something everybody is happy with,” and the parties involved are pleased with whatever happens.