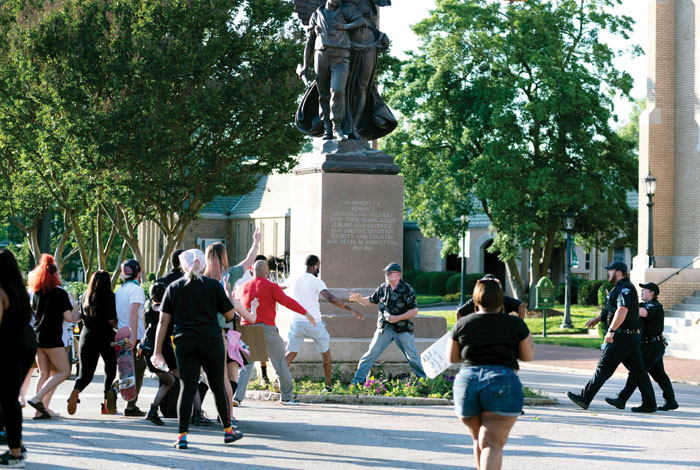 Rowan NAACP President Gemale Black, center in white shirt, squares off with Jeffrey Long, who was charged with firing shots in the air during the protest on May 31. Photo by Josh Bergeron.

SALISBURY — In a three-page affidavit, Salisbury Police Chief Jerry Stokes lists several incidents that he felt posed a threat to public safety if the Confederate statue “Fame” is not relocated.

That affidavit was included Tuesday in a resolution the Salisbury City Council unanimously approved, setting the stage for the statue’s relocation. “Fame,” which sits in a median at the intersection of West Innes and South Church streets, is owned by the local chapter of the United Daughters of the Confederacy. During the council lengthy meeting, which included hours of public comments, council members noted their concerns, many of which involved safety.

Stokes, meanwhile, said during his tenure “the monument has become a focal point of increasingly intense conflict.”

Police caught two people on surveillance video, but no one was ever identified or charged with vandalism.

“The following day, an individual cleaning the monument threw a bucket of water on an African-American journalist who was reporting on the vandalism,” Stokes said.

On June 16, 2019, Stokes said he had to assign additional officers to ensure the safety of the City Council, staff and public during a forum where residents voiced their opinions on the statue.

More recently, residents have protested in response to the death of George Floyd, who died in the custody of a Minnesota police officer who was captured on video with his knee on Floyd’s neck. Of those protests, some centered on the Confederate monument.

“The protests resulted in counter-protestors showing up to defend the monument,” Stokes said.

Two days in particular have drawn public attention — May 31 and June 1.

During the May 31 protest, a counter-protester, Jeffrey Alan Long, fired a pistol into the air multiple times. Police quickly apprehended Long and he was later charged with multiple weapons violations including felony inciting a riot. Long allegedly had two weapons — one hidden in his waistband and another inside an ankle holster.

Another man, Brandon Martell Walker was also charged that day with misdemeanor carrying a concealed gun. According to police, Walker hid a gun under a car.

Stokes said during the June 1 protest protesters blocked two intersections near the monument and gathered around and on the base of the statue.

“At one point, several protestors mistakenly believed the man that fired the pistol the day before had returned to the protest,” Stokes said.

Protestors surrounded the man they believed had fired the gun. Police officers escorted the man down North Church Street and away from the protest as protesters chased after them.

Law enforcement had received information that indicated the Rowan County Jail was a potential target for vandalism so officers put on riot gear and formed a line to stop the protestors, Stokes said.

“When officers formed a line, they were verbally and physically attacked. One officer was injured. After ordering the crowd to disperse, officers eventually used tear gas to disperse the crowd,” Stokes said in the affidavit.

Officers redirected the crowd back toward West Innes Street. The same night, it was discovered an individual threw a rock through a Salisbury Post window, located adjacent to the monument. Harvey McCorkle III was later identified as the person who threw the rock and was charged with felony inciting a riot and damage to property.

Stokes further states on June 2 and June 9, as a direct result of the events surrounding the protests at the monument and based on his recommendation, Salisbury Mayor Karen Alexander declared a state of emergency and enacted a downtown curfew.

During the state of emergency, there were no protests around the monument, Stokes noted. Protests did occur in others of the city and were generally peaceful.

“Protests at the Confederate monument have continued since the state of emergency declaration was rescinded. Several groups that support the monument have made comments on social media vowing to protect the monument. Other individuals have directed threatening comments to city officials,” Stokes said.

He added that he’s been in contact with federal law enforcement officials regarding several of the threatening comments.

“As a result of these comments, I have had to declare the area around the monument a protest area and have had to erect signs warning people against carrying guns and other dangerous weapons in the area,” he said.

Stokes ended by saying for these reasons and based on his training and experience, it’s his opinion that the “Confederate monument, where presently located, constitutes an existing and ongoing threat to public safety and a dangerous condition within the City of Salisbury.”

If the monument isn’t relocated, he said, the threat it poses to public safety will continue. He said it’s likely that similar incidents and more dangerous than those he included will continue to occur.