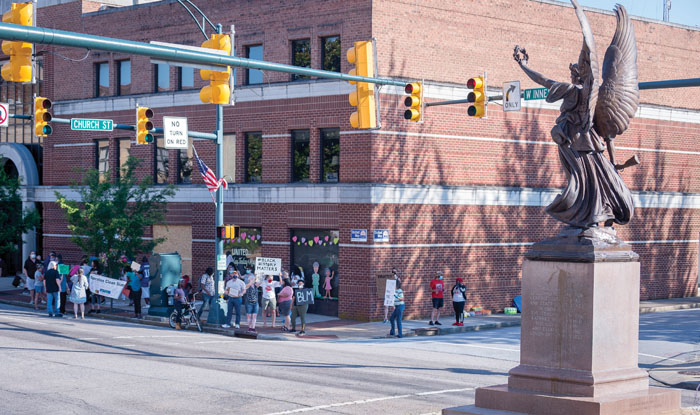 SALISBURY — After hours of public comments, the Salisbury City Council on Tuesday voted unanimously to declare the “Fame” Confederate statue a public safety issue and allow the local chapter of the United Daughters of the Confederacy 10 days to agree to a deal that relocates the statue to the Old Lutheran Cemetery on North Lee Street on the city’s dime.

City Attorney Graham Corriher presented two proposals to the council following more than three hours of comments from the public. The first relies on a determination from Salisbury Police Chief Jerry Stokes that the current location of the statue “constitutes an existing and ongoing threat to public safety and a dangerous condition within the city of Salisbury.” Further, the chief stated relocation is required in order to eliminate the public safety threat and dangerous condition.

The issue of public safety reignited following recent protests that escalated, including gunshots fired into the air on May 31, as well as the use of tear gas on citizens by local police in riot gear the following day. The mayor then declared a state of emergency and curfew following those incidents. Additionally, incidents of vandalism occurred at the statue in August 2018 and March 2019.

The first approved resolution requires the UDC to remedy the public safety threat and dangerous condition by relocating the monument on or before July 16.

The second resolution, also approved by the council unanimously, allows the Robert F. Hoke chapter of the UDC 10 days to agree to a proposal that has been reached between the Historic Salisbury Foundation and the city. The UDC reportedly has not agreed to the proposal yet. But in that agreement, Corriher said, the city would pay for the relocation costs of the statue to the Old Lutheran Cemetery. From there, any improvements or repairs would be the UDC’s responsibility.

About $55,000 has been raised for amenities on the cemetery site so far, said Mayor Karen Alexander. The Historic Salisbury Foundation, another party in the agreement, would become responsible for overseeing the funds that come in to support site improvements. If the UDC doesn’t sign the agreement within 10 days, however, the deal wouldn’t be considered binding and further action or compromise would be needed for the statue’s move.

Council member David Post noted in the meeting that it’s ideal for the action to be taken via a mutual agreement rather than through litigation.

Council member Brian Miller said, while some see the statue as sacred and some see it as hateful, he’s “somewhere in the middle.” He said it’s an inanimate object, but he added his personal view doesn’t matter because the location has become a “flashpoint.” Not taking action could result in additional danger, Miller said. He added the statue can still be appreciated in a different place, and that he hopes those who find it offensive feel as if they’ve had their voice heard on this issue.

Council member Tamara Sheffield called the action “long overdue.” She added it’s the council’s responsibility is to ensure a safe, prosperous and inclusive community for everyone.

Post emphasized that if the resolution to force the relocation is invoked, it will be divisive. He added that he supports the relocation because it’s the right thing to do, but he said forcing the issue won’t create the healing needed in the community.

Mayor Pro Tem Al Heggins, who endured a series of direct attacks during the public comments period, spoke fondly of the unity among all five council members, noting that the five don’t always agree on all issues, “but when we get there, we get there as a team.” While emotional, Heggins added the importance of continuing difficult conversations and noted the council’s actions are “saving lives.”

Alexander said she was struck by the work and unity among community members — some of whom don’t desire any credit for the work. She added that Salisbury can serve as a beacon to the rest of the country as a community coming together for this decision.

Before the vote, the public comment portion of the meeting spanned more than three hours, with nearly 30 comments from the public speaking in support of the relocation and 70 comments from those in opposition. Additionally, more than a dozen members of the public expressed support for relocating the statue at the June 2 council meeting after Heggins suggested a discussion about its current location.

Those who supported the move cited its symbolism of racism and the painful reminder of slavery.

“I have no problem with memorializing the dead and I respect the importance of studying and remembering history,” said Nanci Gaines during the public comment period on Tuesday.

Gaines added, “The words that are inscribed on (the statue) perpetuate the myth of the lost cause. It glorifies a cause that was not worthy of the sacrifices our ancestors made. This false glorification should not be the first thing people see when they come into our town.”

Dr. Matthew Harrison, a local physician, said that despite passing “Fame” thousands of times and never thinking much of it beyond its beauty as a piece of art, he can no longer support its location with the current racial tension across the community and the nation.

“I can no longer sit idly by as it casts a dark shadow of hate and oppression over our city,” Harrison said.

Others argued it was a public safety issue in its location, and that it’s more appropriate to move it to a Confederate cemetery where its full historical scope can be understood and appreciated.

Members who opposed the relocation mostly defended the statue’s historical and artistic value to the city of Salisbury. Some suggested the matter should be decided by the people in a ballot measure instead.

Isaiah Dulin, of Granite Quarry, said the proposal infringed on the rights of citizens and violated the law.

“Everything that is going on is wrong, and you know it’s wrong,” Dulin said. “But you are going to go against the law because the law doesn’t matter unless it’s a bunch of black people in the streets of Salisbury that are going to tear this city, this state and this country down to the ground.”

Local resident Jerry Jackson said he didn’t believe the statue, which has stood in its current location for more than a century, was hurting anyone and that it served as an artistic part of Salisbury’s history.

Some who opposed the relocation spoke of their belief that Heggins’ political record and current role in the city has promoted racial tensions and division in the community. There were several others who spoke fondly of Heggins’ record of enacting change — particularly individuals who worked with her or were familiar with her time at the city of High Point.

Summer Earnhardt said she’s mesmerized by the statue’s beauty and sees it as nothing more than a guardian angel holding a fallen soldier.

“I do not see her as a symbol of hate,” she said. “Even though, technically, ‘Fame’ is a Civil War monument, I’ve never thought of it as such. I always considered it a tribute to all soldiers that fought greatly or that gave their lives for our country and city.”

She added that removing “Fame” would be like removing one of Salisbury’s own.

Local citizen Kristen Hodges emotionally called on people to acknowledge all aspects of the history. Citing the inscription on the statue, Hodges said, “Under this Constitution, some members of our human family would be considered three-fifths of a person.”

“Fortunately, some things have changed and we get to make history now, today,” she said. “I am here today as a mother. As a mother of children who asked me what their worth would have been.”