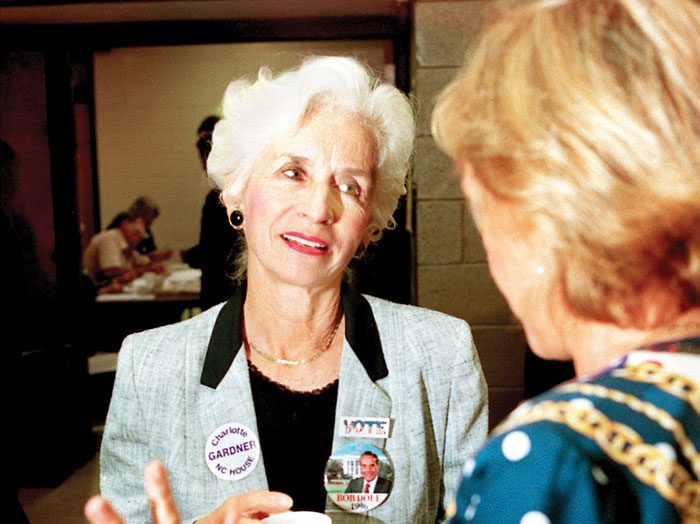 N.C. House of Representatives candidate Charlotte Gardner talking to a supporter at the GOP meeting at the Civic Center in 1996. File photo by Wayne Hinshaw.

SALISBURY — It may have been 2:30 a.m., but Charlotte Gardner quickly answered Brad Ligon’s phone call.

Ligon had just advanced out of the Republican primary for the 35th District N.C. House seats with Gardner. Among other things, Ligon said, “Congratulations, Representative Gardner.” In 1982, that remark may have been premature. After all, there was a still a general election ahead.

But it wouldn’t be premature for long. After breaking barriers in 1982 to become the first woman to run for a state House seat in Rowan County and the first woman nominated, she would win a seat in the N.C. House for the first time in 1984. As a legislator, she’d bring a spirit of hard work and a set of strongly held beliefs to Raleigh, say family, friends and acquaintances. She was also a staunch conservative who said that legislators must find ways to give in on some issues without sacrificing basic principles.

“You’re sent there to represent Rowan County, not just what you think,” Gardner told the Post in 1984. 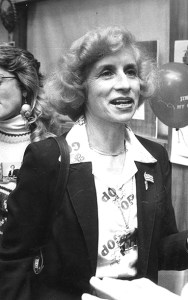 Gardner would relinquish her seat in the legislature after she was bested in the 2000 election by Lorene Coates, a Democrat. But she wouldn’t give up her passion for taking care of others. Shortly before her death June 10 at the age of 88, she asked her daughter Leslie Tully to take food to a neighbor because he wasn’t feeling well.

“She was just completely selfless. You never really saw her do much for herself because she was also doing something for someone else or her children,” Tully said.

Gardner was born Nov. 14, 1931, in Baltimore to Marcel and Charlotte Knapp Ancher. And she attended schools in Baltimore before moving to Rockwell and graduating from what was then Rockwell High School in 1949. She was second in her class.

She earned a degree from Catawba College in 1952 — the same year she married her husband, Lester E. Gardner. Together, they had six children, Terry, Tim, Tom, Leslie, Jeanne and Ted.

For a time, Gardner worked as a teacher in Rowan and other counties, and that work contributed to the value she placed on education issues, said Rep. Julia Howard, a Republican who for years was her seat mate and roommate when the legislature was in session.

At the age of 50 and living in Salisbury, Gardner first announced her candidacy for the state legislature saying “I believe a woman can contribute something in Raleigh because the ladies that are there work very hard.”

Gardner said she was inspired to run by Rep. Besty Cochraine, who represented Davie and Davidson counties at the time. 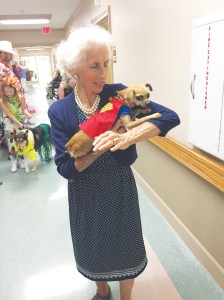 Chihuahua Coco may look frightened, but as Super Man he fiercely defended owner Charlotte Gardner during a dog fashion show on Aug. 26, 2018, at The Laurels of Salisbury.

In a familiar story, there were questions about how a redistricting plan might affect the election, but Gardner said that wasn’t a major concern.

“With the continued delays, there will be very little time for a newcomer such as myself to establish an identity,” Gardner said. “No obstacle is insurmountable, however, and I will work very hard to overcome this disadvantage. … Of course, I am under no delusions about one person’s ability to change the system, but I pledge to work to the best of my ability should the voters place their confidence in me.”

At the time of her first race, she was vice chairman of the Rowan County Republican Party and had been involved in a long list of civic clubs. She was active in her church Sacred Heart Catholic Church. And she was active in political advocacy, too. Former Post Editor Elizabeth Cook said she first met Gardner around 1979 or 1980 when she and others were going to Raleigh on a bus to fight the Equal Rights Amendment.

“She was a Phyllis Schafly-style activist, someone who didn’t call herself a feminist but proved she was as capable as any man,” Cook said.

Before she was elected, she and several hundred other female elected officials and candidates were invited to the White House for a briefing. She had strong views against abortion and had co-chaired Republican Jim Martin’s Rowan County campaign for governor.

When she won a Republican nomination for the 35th House District seat, Gardner beat Jim Sides, then a county commissioner. On Tuesday, Sides said Gardner was a good legislator, a good woman and that he “thought the world of her.”

“She worked hard for the citizens,” Sides said.

That election, 1984, was just two years after Jamima P. Demarcus, another trailblazer for women in local politics, was the first woman elected to the Rowan County Board of Commissioners.

“That was along the time when more women were becoming involved in government, and by that time it was a natural thing for a woman to get elected to the legislature,” Sides said. 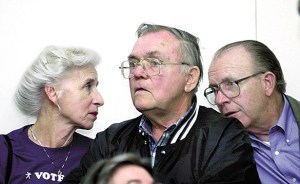 Charlotte Gardner talking to Commissioner Frank Tadlock behind her husband Lester as he seemed stunned by the last election returns as they came in in 2000.

Once in Raleigh, Gardner soon found herself working alongside Phil Kirk, who taught one of her daughters at Knox Middle School and Salisbury High before lobbying the newly minted legislator in the state capital.

“She studied the issues and knew the issues, and I remember she was very conservative. At the time, she was in the minority also,” Kirk said. “But she wasn’t afraid of compromise. That was back in the days when that happened more than it does now. … It seemed that even people that didn’t agree with her politically seemed to like and respect her personally.”

By the mid-to-late late 1990s, Republicans had moved out of the minority and Gardner and the late Rep. Eugene McCombs, of Faith, had the experience and clout in the legislature for top tier seats — Nos. 7 and 10, respectively. In an online post accompanying her obituary, McCombs’ son Keith said Gardner helped advance legislation that she believed would better serve her community and her state.

“She will be well remembered for her tireless service to Rowan County and its citizens,” Keith McCombs said.

Tully remembered her mother being a particularly strong advocate for the welfare of children and families. In 1998, she introduced a policy to extend health coverage to children of the state’s working poor. When introduced, the Republican’s plan promised to, among other things, cover all children in families with incomes up to 185% of the poverty level.

But it was a policy push in 1997 after four Rowan County children died amid tragic circumstances that attracted more attention. Three of the children died while their caregivers were being investigated by the Rowan County Department of Social Services, and in 1997 she proposed opening records into their cases.

She had help from Gov. Jim Hunt in pushing for a new law, but Gardner raced the clock to get her bill passed by the end of the legislative session. She prevailed, and Hunt signed her bill in August 1997 at a special ceremony. The governor praised the Rowan Republican’s work.

“You’ve shown marvelous leadership,” Hunt told Gardner while shaking her hand. “You were bold to take this issue on.”

Cook said that Gardner’s heart for those children and preventing more deaths like theirs was clear.

“Charlotte gave her all, and always in a way that was thorough and well-considered,” Cook said.

Howard recalled that Gardner would fight for causes she believed were right.

“She would fight for what she believed in to the very last. She was very firm and never changed her position when she thought something was right in her heart,” she said.

Howard also recalled some lighter moments that she shared with her former roommate Gardner. After Howard tore the toe out of a pair of pantyhose, Gardner offered to sew it up.

“I said, ‘You can’t sew up pantyhose,'” Howard recalled. “But she just took a needle and thread and just fixed it right up. …  She was just such a very gracious lady, a real lady and a dear friend.”

A mass of Christian burial for Gardner will be held at 11 a.m. today at Sacred Heart Catholic Church by Father John Eckert, with burial to follow in the church cemetery. Summersett Funeral Home in Salisbury is handling arrangements.

The service will be simple, Tully said, with some things excluded because of COVID-19. But that’s probably the way Gardner would have preferred it. She lived a life of service to her family and the public because she wanted to help people, not because she wanted attention.

“She did so much for so many, and would never have liked a lot of focus on herself,” Tully said.