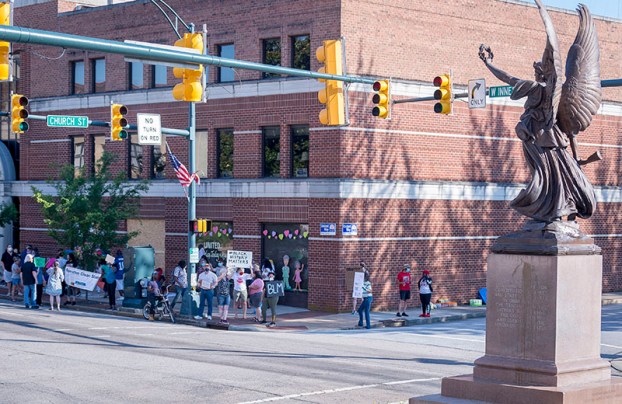 A collection of local organizations have signed onto a statement in support of the relocation of the “Fame” Confederate monument to a cemetery on Lee Street.

The statue, which sits in the median of West Innes Street in downtown Salisbury, was dedicated in 1909 on land that was deeded to the local chapter of the United Daughters of the Confederacy by the city of Salisbury. It depicts a winged figure holding a dying soldier as he clenches his gun. Engravings on the base of the monument note that it commemorates the service of Confederate soldiers.

The same sculptor who made Salisbury’s monument, referred to as “Fame,” also made a similar one that was previously on display in Baltimore.

The most recent flare-up in long running tensions over the monument occurred when a man associated with Confederate groups fired a gun into the air during a peaceful black lives matter protest. The following night, police used riot gear and tear gas to disperse protesters that had also gathered near the Confederate monument and chased two men away from the steps of St. John’s Lutheran Church.

The full statement from the collection of community groups, which call themselves the Community Fusion Coalition, is below.

Blood is worth more than bronze, and we have come to the point where this relic of the past poses a hazard to the community that continues to escalate. When gunshots ring out and police arrive in riot gear to suppress civil unrest, the hazard posed by “Fame” can no longer be denied.

We are the Community Fusion Coalition, representing multiple grassroots groups/organizations in Salisbury and Rowan County. Together, with our collective voices, we say move “Fame.”

The time for conversation is over. Citizens and visitors to Salisbury should not be confronted by a monument to white supremacy. Black citizens should not be forced to face a statue every day that tells them they are not welcome in their own city. Montgomery, Alexandria, Louisville, Indianapolis, Jacksonville, New Orleans, Birmingham, Memphis, Asheville, Rocky Mount and other cities all over the country are moving their monuments. The time has come that Salisbury follows suit.

Our culture is shifting, and the cry from Salisbury citizens for racial justice and demonstrable acts of racial reconciliation cannot be ignored. We want to lend our voices of support for recent negotiations to move Fame out of the heart of our city and into an appropriate space where it no longer poses a threat. Our city needs to be welcoming to all. Moving “Fame” to the Lee Street cemetery will ensure she lives in a place that frames her legacy without lending to the whitewashed history she was erected to promote.

Media sources and private citizens are reporting that a tentative agreement has been reached between the United Daughters of the Confederacy (UDC) and the city of Salisbury. We hope that these reports are not mere conjecture. We urge the Salisbury City Council to work with the UDC to make this relocation a reality. We offer our support to all of those involved in these delicate negotiations. The time for change is upon us and we cannot squander this opportunity for meaningful change. We support any action that will lead to racial equity, equality and unity for all of our citizens.

My Turn, Elaine Spalding: How can business community help in current times?