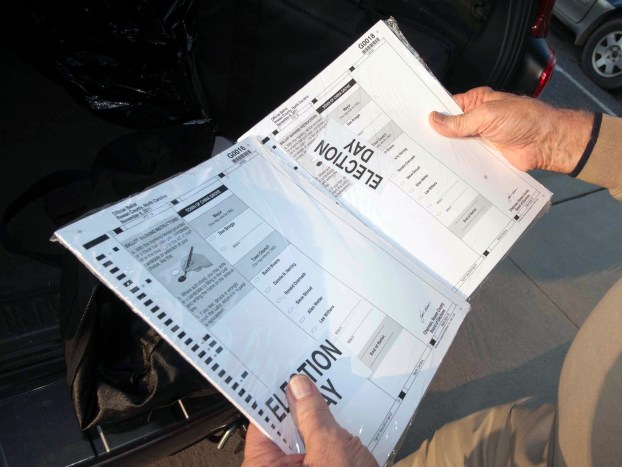 An election judge in 2014 looks at a copy of the ballot that voters in China Grove and Landis used.

If you’ve received an absentee ballot request from the Center for Voter Information, you may want to check with the Rowan County Board of Elections before sending it in.

The organization, a non-partisan and nonprofit based in Washington, D.C., has mailed about 80,000 absentee ballot request forms to North Carolina residents with information already pre-filled. That number includes more than 700 such forms mailed to local voters, according to the Rowan County Board of Elections.

Pre-filled ballots may sound convenient. If information like name and address are already on the ballot, there’s less for voters to do to before sending it in. But pre-filling ballots became illegal last year as part of a series of election reforms after fraud in the 9th Congressional District election.

As a refresher, Republican Mark Harris appeared to have beaten Democrat Dan McCready by 905 votes after election day, but the State Board of Elections refused to certify results because of irregularities with absentee ballots. A criminal investigation ensued; a specific focus area was Bladen County, where a man working for Harris was indicted for handling ballots illegally.

Susan Price, senior elections clerk for Rowan County, said some pre-filled ballots have been filled out and returned. And when that’s happened, Price said staff have send a new form and information explaining the situation. Staff plan to do the same if any additional requests are turned in with information that’s been filled out before reaching the voter.

An example of a pre-filled ballot on the Rowan County Board of Elections website shows information typed into name and address fields. There’s a debate about whether those items constitute any sort of fraud if mailed in, but the law speaks for itself. That information can’t be filled in before the voter receives it.

Price said the Center for Voter Information mailed more than 4,500 total ballot requests to local voters, but that just the 700 such forms were not allowed under the new law. Anyone who has a question about an absentee ballot request form they’ve received or wants to ask for one can call the Rowan County Board of Elections office at 704-216-8140. The Board of Elections website (rowancountync.gov/elections) also has an official request form under a section titled “quick links.”

Anyone with other election-related questions should also ask them now because there’s plenty of time before absentee ballots, of which local officials expect to send out a lot more than usual this year, will be sent out. Price said Sept. 4 marks the first day ballots will be sent. Ballots can be requested until Oct. 27.

With election in November, voters who contact the Rowan County Board of Elections now can also ensure their registration is up-to-date before arriving at a polling location and discovering issues. Advocacy groups, meanwhile, must ensure they are complying with laws so they don’t negatively affect a voter’s ability to participate in an election or confuse them.

The case drew international attention. And why wouldn’t it? A former Salisbury police officer had been accused (and would later... read more