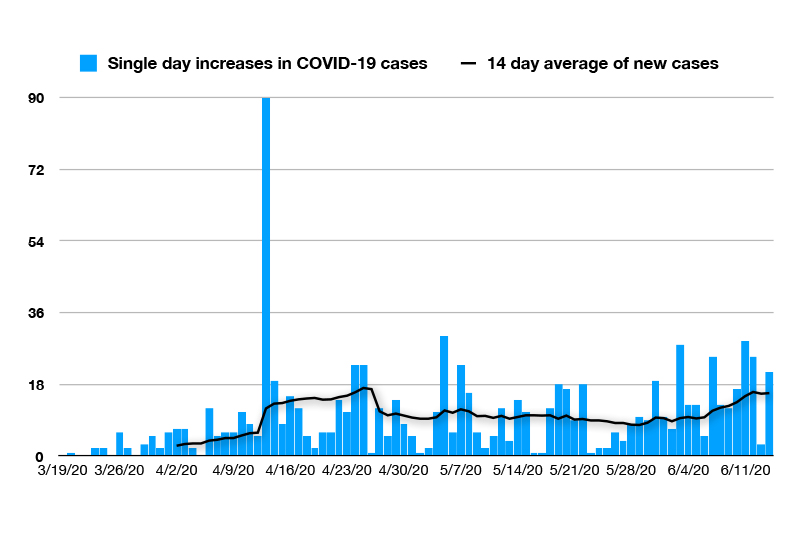 This chart, which uses data published by the Rowan County Health Department, shows an increase in the 14-day rolling average of new cases.

SALISBURY — The COVID-19 outbreak in Rowan County worsened in recent weeks, with a steadily increasing curve of cases and the hospitalizations returning to a previous record.

On Sunday, there were 879 total positive cases and 348 active cases in Rowan County. The active case number counts 491 people who have recovered and 40 people who have died from COVID-19. There were 19 people hospitalized on Sunday. The county said at least 4,654 tests have been conducted.

Charts maintained by the Post of local health department data show the county’s 14-day average of cases over the weekend increasing to nearly the same level — about 18 cases per day — as when the Citadel nursing home outbreak was first confirmed.

The rolling average of cases reached its peak in late April and was on a steady decline until early June.

Nursing homes had been a significant source of cases at the start of the outbreak here, but positives lately have shown up more frequently outside of the facilities. The age of positive patients has dropped slowly along with the recent rise and is now at 46.8.

The recent rise in cases does not yet pose a major threat to overwhelming local hospital facilities, which have 104 beds dedicated to COVID-19 patients and 73 ventilators available. Testing options also are more readily accessible now than when the county saw its previous peak.

Sunday’s statewide update by the N.C. Department of Health and Human Services shows 44,119 laboratory-confirmed cases, 1,109 deaths and 798 people currently hospitalized. There have been 627,130 people tested for COVID-19 in North Carolina, which has also seen indicators worsen in recent weeks.