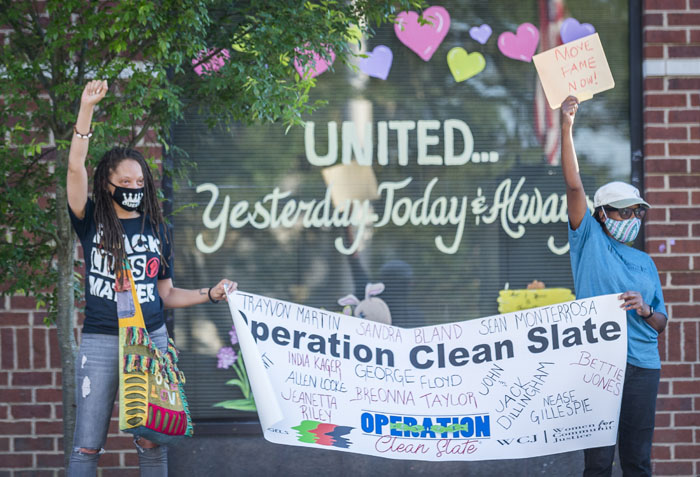 “This is now a public safety issue. Clearly the evidence has presented itself, it can no longer remain,” said Regina Dancy, of the group Women for Community Justice.

While incidents during protests have flared up tensions of late, Dancy said the calls are not a new cause locals have taken up; it’s one they’ve been pushing for a few years now. Dancy said local people are pleased that the Salisbury City Council is discussing the issue because it could mean the statue will actually be removed.

Dancy is referring to the announcement Friday by the city that the council is in the middle of a tentative deal to move the statue. One location being discussed is a cemetery in the 500 block of North Lee Street, where tombstones for Confederate soldiers are located.

There were a number of groups represented at Saturday’s protest — most of whom were gathered at opposite corners from the statue on West Innes Street — in front of the Salisbury Post office and the Rowan County Administration Building. The crowd, a little smaller than some previous protests, included representatives from Salisbury Pride, Salisbury Indivisible, Women for Community Justice and seven others which make up the group Community Fusion Coalition.

“We are gathering to express our support for the tentative deal that has been reached to relocate Fame. It’s more of a rally than a protest,” said Samantha Haspel, of Salisbury Indivisible.

Tim Coffey, who represented Salisbury Pride said he shares sentiments that were noted in a statement his organization released via its Facebook page saying that, “We recognize that there is systemic racism in our society and also that passive silence and inaction infers complicity, which is unacceptable. We must be vocal and act for justice for black people.”

The organization issued a challenge to the community to “stand up and loudly say, “Black lives matter.”

“This is a pivotal time where we need to see what it’s like to walk in someone else’s shoes and know there’s so much pain. If we know there’s something we could do we should act on it,” Coffey said.

Some, including Mike’o Martelli, believe the statue should be moved to a less central location. Martelli said doing so is important for more marginalized people in the community.

Mahogany Koontz, 19, who helped organize some of the first protests following George Floyd’s killing in Minnesota, said her main goal in continuing to participate has been to see the monument come down. Koontz said it shouldn’t have taken protests to get the city of Salisbury to listen.

She’s continued to be a part of other rallies and protests and hopes they continue, if needed, when she goes off to college in the fall. She’s grateful for the support of those whose views align with the removal of the statue.

Rowan County resident Michael Stringer said his grandfather and great-grandfather never had the opportunity to vote, but they were taxpayers.

“Every time they came to town, they had to see that statute,” Stringer said. “It’s an affront to me and other veterans.”

He would prefer the statute to be placed in a museum.

“To be an anti-racist you have to call out racism and that’s a racist symbol (‘Fame’) and in this moment we have an opportunity to actually have change,” Stringer said. “The momentum is on the side of change. Racism is not a biological construct, it’s a social construct used to oppress people.”

It did not appear that there were counter-protesters Saturday. However, there were a few people who drove by and yelled from their vehicles at protesters who shouted “black lives matter”

There are at least three online petitions that have been created calling for the removal of the statue. Together, those petitions have garnered over 10,400 signatures. The petitioners write, “even if the original intent of erecting the statue cannot be agreed upon, it is clear that this statue inspires hatred in some and sadness in others.”

A newly created petition in support of keeping Fame in its current location has gained over 3,300 signatures. A previous edition in 2017 attracted several thousand such signatures.

“Fame” and the land underneath it is owned by the local chapter of the United Daughters of the Confederacy, which has not issued public statements about the ongoing debate and has historically remained quiet about its potential relocation. The North Carolina Sons of Confederate Veterans, however, said in a Saturday statement that it will stand with its sisters in the United Daughters of the Confederacy.

The N.C. Sons of Confederate Veterans said it opposes taking down and removing memorials “to our ancestors who fought and died for our state in the War Between the States.”

“We cannot and will not stand idly by as a small, noisy, organized group of Marxist revolutionaries terrorize the majority of our citizens and manipulate local governments into submission,” said spokesman Frank B. Powell III.

A group of local people that have formed a Facebook page called “Fame Preservation Group” on Friday called for people who are Salisbury residents to contact council members and demand to be heard before and during the next meeting — on Tuesday.

“The UDC caved too easily without a lick of word from anyone else regarding how their monument reflects on our lives,” the Fame Preservation Group said in its online statement. “Tell Salisbury and the UDC how you feel by contacting them through letters or emails, or both. Nothing is official until the council confirms.”

A handful of protesters on Saturday continued holding signs and chanting into the late evening as colorful chalk drawings created by some of the children and adults who attended the protest remained on the sidewalks. A curfew in the downtown area was lifted last week.

Jackie Miller, also with Women for Community Justice, was one of the last remaining protestors still standing. She said they’ll return every day until Fame is removed, even if it takes years.

Artists prepare for another year of Salisbury’s annual sculpture…