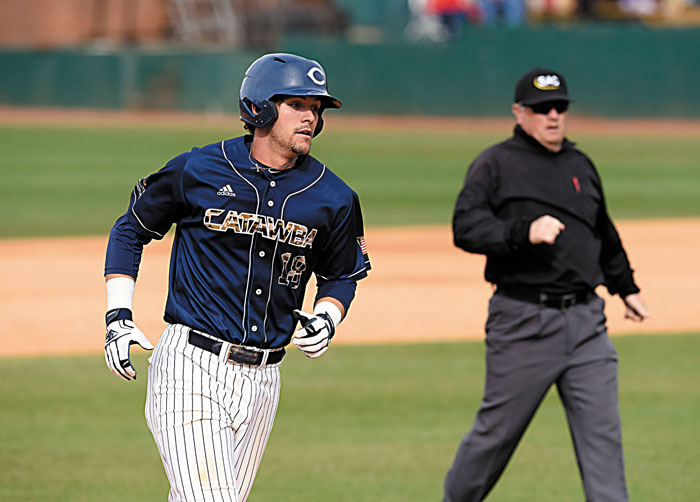 Catawba's Hunter Shepherd going into 3rd base on his homerun. photo by Wayne Hinshaw, for the Salisbury Post

He’s like a fictional hero, a comic book guy with a cape, but he’s real.

A local kid who stayed home at Catawba College when he was recruited by bigger programs, the 6-foot-3, 215-pound Shepherd has done it all for the Indians. He’s hit, he’s fielded and he’s pitched at a high level, and he’s been even better off the field than on it.

“Hunter is a very, very good player offensively, defensively, and when he’s on the mound, but he’s an even better person,” Catawba coach Jim Gantt said. “All of our players and coaches are better people because he’s been in our program.”

The 2017 South Atlantic Conference Freshman of the Year and the 2019 SAC tournament MVP, the most recent accolade Shepherd received was Academic All-American for the abbreviated 2020 season.

“A lot of long nights with homework and a lot of late-night papers, but you just do what you have to as far as the classroom,” Shepherd said.

The good news for Catawba baseball fans is that Shepherd, a lefty hitter and thrower who will celebrate his 23rd birthday in December, plans to return to Newman Park for 2021.

Like the other seniors who competed in spring sports and had the curtain drawn suddenly on their seasons by the pandemic, Shepherd has been granted an extra year of athletic eligibility. Some student-athletes will decline that year and accept real-world jobs for career and financial reasons, but Shepherd is going to take advantage of that extra baseball season.

Shepherd has graduated with a communication degree and a 3.64 GPA, but he’ll maintain his student status by working on the masters degree Catawba offers in health science and clinical mental health counseling. That’s a program he’ll take online.

“I think a lot of the guys who were seniors are planning to come back,” Shepherd said. “We’ll have another good team.”

We’ll never know — you have to get the bounces in addition to being really good — but in March Catawba looked like a team that was headed back to the D-II championships in Cary. The Indians were 19-3 when the season was stopped and had won 19 of their last 20, after an 0-2 start. Catawba had scored double-digit runs 11 times and was ranked second nationally.

Shepherd was 3-0 on the mound and had already belted nine home runs, while catcher Cameron Morrison and third baseman Jackson Raper, who will play for Illinois next season while he works on a masters in accounting, were terrorizing opposing hurlers. Raper socked six homers in Catawba’s last four games.

“That last series we played in Wilson, Jackson was unreal, as hot as anyone I’ve ever seen,” Shepherd said. “We were hitting our stride as a team, guys were hitting the ball hard, and it was a lot of fun to play. Then it was over suddenly, but as much as I hated to see the season end, we can’t go around feeling sorry for ourselves. We’ve got to move on from it. There were a lot of teams in a lot of sports who went through all the same things that we did.”

Shepherd won five games on the mound and batted .331 for Rowan County’s state champions in 2015.

In 2016, he produced one of the best slugging seasons in program history for the Rowan team that finished as national runner-up. He had a program-record 29 doubles. His 70 RBIs tied for third all-time for a single season.  He only won three games that summer, but he pitched seven shutout innings to win a World Series game and also saved one of Rowan’s victories on the big stage in Shelby.

Catawba was a magnet for Shepherd for a lot of reasons. There was Gantt, who had coached him in American Legion ball. There were a number of Catawba players who were friends, and there was the opportunity to play at Newman Park and stay at home. There was also the chance to be a two-way player. At a bigger program, Shepherd wouldn’t have gotten that opportunity, but Catawba has the occasional two-way guy. Chris Dula (2013) and Craig Brooks (2015) were drafted by MLB as pitchers, but they were two-way players for the Indians.

His first two seasons with the Indians, Shepherd swung the bat occasionally and hit four homers, but Catawba had Chance Bowden manning first base, so Shepherd primarily contributed as a pitcher. He was 8-0 on the mound as a freshman, tying the program record for most wins in a season without a loss and making the All-SAC team. He was 5-2 as a sophomore.

The breakout for Shepherd was his junior season in 2019, when he got his first chance to be a regular in the lineup and emerged as a terrific two-way player. He was 7-4 on the mound and batted .358 with 12 homers and 55 RBIs. He hit grand slams against Mars Hill and Lenoir-Rhyne.

“I really enjoyed it because it gave me a chance to help the team in more ways,” Shepherd said. “Early in the week, I would focus on hitting and playing first base, but as I got closer to making a start on the mound on the weekend, I’d start preparing to pitch. It really wasn’t that hard.”

In the 2019 SAC tournament, Shepherd was at his double-duty best to take the MVP award. He went 9-for-15 at the plate, including one of the key hits in the 3-2 championship game win. In his mound start, he shut out a strong Newberry team into the sixth inning, and Riley Myers and Peyton Williams were able to finish off a 2-0 win.

Shepherd stayed hot in Catawba’s five regional games, going 11-for-22 for a .500 batting average. He started two of Catawba’s wins on the mound.

He cooled off in Cary in the D-II championship tournament, and Catawba was eliminated in two games.

That mini-slump provided some fuel for his amazing start to the 2020 season. He was performing as well as he ever had when play was stopped.

Shepherd hopes to stay sharp by playing this summer for the Morehead City Marlins of the Coastal Plain League.

“That’s the plan,” Shepherd said. “Our original date to report was pushed back, and there’s some uncertainty in the CPL with some teams saying they’re playing and some teams canceling their seasons. “I’ve really enjoyed playing in that league the last two years. It’s a blast playing in Morehead City, with fishing and the beach, as well as baseball. And I’ve got a great host family there.”

Shepherd has experienced no issues swinging a wood bat. He was an all-star in the CPL in 2018 and 2019.

Shepherd will return to Catawba with 23 career wins (tied for 12th all-time) and ranks in the all-time top 20 with 211 strikeouts.

He’s also accounted for 25 homers, so he’ll likely make some top 20 lists as a Catawba hitter, as well. With the tremendous history Catawba baseball has, that would be quite an accomplishment.

“Hunter has been one of the special ones,” Gantt said.