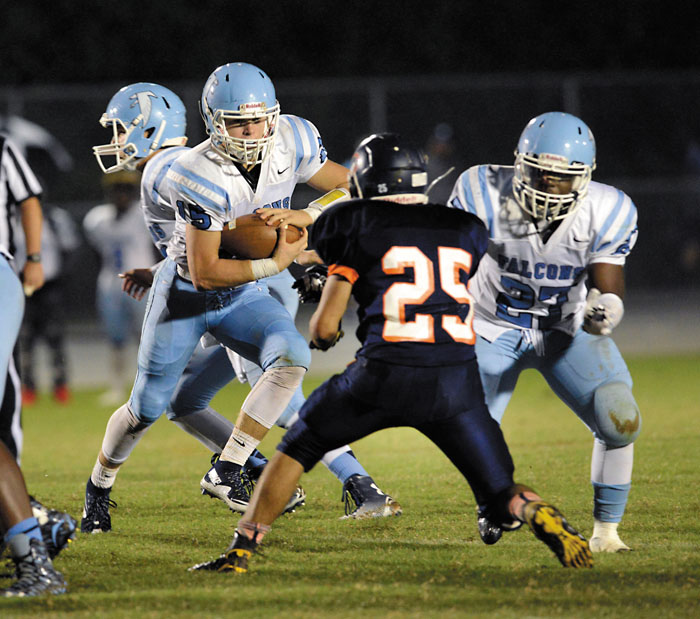 For most athletes, it’s about getting a degree, and it’s about making memories. 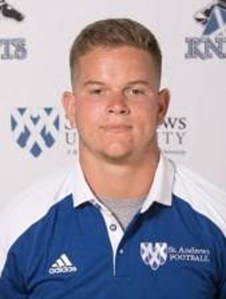 “I built some good bonds with teammates and I had some pretty good college games,” Otto said. “I helped the St. Andrews program get started and helped it get better. I was a team captain for the 2019 season.”

He has a season of football eligibility remaining, but he doesn’t plan to employ it. He has a business administration degree and is currently taking real estate courses. His thinking is that it’s time to tackle the real world now.

“Every year I was at St. Andrews I was a part-time guy, splitting time at quarterback, and I just didn’t see doing it all over again,” Otto said. “The competition was a local guy from Laurinburg (former Scotland quarterback Dashaun Ferguson). We were always going to be sharing time.”

He started in center field for the Rowan County American Legion team that won the state championship in the summer of 2015.

Because of the Legion run, Otto got a late start with West Rowan football in the fall of 2015, but he quickly took charge for new head coach Joe Nixon. Otto was only the third quarterback in Rowan history to rush for 1,000 yards in a season. Besides being the county’s No. 2 rusher and scoring 12 TDs on the ground, Otto completed 62 percent of his passes for 1,828 yards and 18 touchdowns, with only seven interceptions.

The game of the year and one of the games of the decade was West’s 28-27 overtime win against Carson in the first round of the 3A state playoffs. Otto had the biggest statistical game any Rowan QB has ever had —  337 passing yards and 167 rushing yards — 504 yards of total offense. Otto’s 79-yard TD pass to Juwan Houston lifted the Falcons back in the game. Otto’s 26-yard scoring run got the Falcons into overtime. Otto was a guy who would plow right through and arm tackle. His third rushing TD of the night came in the OT period, and Austin Morrison kicked the decisive PAT to edge the Cougars.

“What I remember is being down big at halftime (21-7), but everyone believing we could still come back,” Otto said.

That was one of five come-from-behind wins the Falcons registered that season. Otto was the Offensive Player of the Year for Rowan County.

Nixon gushed frequently that season about Otto’s leadership and toughness. In what was basically  two-season varsity career, Otto accounted for 49 TDs (32 passing, 17 rushing).

Otto also was a key member of coach Seth Graham’s West baseball teams that won conference titles in 2015 and 2016 and was one of  27 “Heart of a Champion” winners honored by the NCHSAA for the 2015-16 school year,

Otto (6-0, 195) wasn’t heavily recruited, but he got a chance at St. Andrews, where the Knights were just getting a football program started. Everyone in that first recruiting class at St. Andrews redshirted, as the Knights prepared to make their debut on the field in 2017.

There were six quarterbacks competing for playing time as St. Andrews scrimmaged prior to the 2017 season. Ferguson and Otto emerged as the best options to lead the offense.

St. Andrews went 2-8 in 2017. Otto scored his first college TD in the historic first win by St. Andrews, a 48-25 romp against Cincinnati Christian in the home debut by the Knights.

Otto missed three games with a sprained ankle, but he had three rushing TDs in a 43-42 loss to Union (Ky.).

The highlight of the 2018 season for Otto was a game against a stout Georgia squad, Reinhardt, a team ranked fourth in NAIA. St. Andrews lost 54-30, but Otto was 9-for-13 passing for 272 yards and three TDs. He didn’t throw an interception and ran for 62 yards.

But, for the most part, the 2018 season wasn’t fun. St. Andrews was 2-7, and that also was the year of Hurricane Florence. In the aftermath of Florence, water was 30 inches high on the St. Andrews campus, the computer lab was flooded and the campus was without power for eight days. The cafeteria was destroyed. The school shut down for two weeks.

Otto hung in there.

The start of the 2019 season was delayed by Hurricane Dorian, but the Knights wound up going 5-5 overall and winning five of their six conference games to finish in second place in their division. That was a giant step up. Otto did some damage, accounting for four TDs against Bluefield with a mix of running and passing, and accounting for three TDs in two other games.

“We didn’t throw that much, but I did hit some long passes,” Otto said. “The second game of the season, I played some running back. One of our coaches told me I’d maxed out as a quarterback.”

But he hadn’t maxed out yet. For the season, he produced 18 touchdowns, 11 passing and seven rushing. There was some frustration in not playing full-time, but there also was some satisfaction in watching the Knights jump from two to five wins.

“(Former West Rowan defensive lineman) Devin Turner was a really big help to our team,” Otto said. “He was solid.”

Otto finished his three-season, part-time career at St. Andrews with 19 touchdown passes and 12 rushing TDs. He threw for 2,186 yards and ran for 643.

Those stats will look better to Otto as the years go by.

But there was more chapter to his athletic story.

He decided to play baseball for St. Andrews in the spring and attempted a comeback in that sport.

“I went in to see the head coach (Andy Fox) and told him I was interested in playing baseball,” Otto said. “He said, ‘Do you really thing you’ve still got it?,’ He told me I could come to tryouts and I did pretty well. I hit a few homers in batting practice, and guys were looking at me like, ‘Are you serious?’ ”

His first college at-bat was successful.

“I went up the plate, not looking to do anything spectactular, and I got a hit,” Otto said. “Backside. A clean hit to right between the first and second basemen.”

In a matter of weeks, Otto went from tryout longshot to team member to starting 13 games, mostly in center field. It takes a special athlete to do something like that at the college level.

St. Andrews was 12-13 when the season was cut short by coronavirus. Otto produced four hits in a three-game series with Reinhardt on March 7-8, and the Knights didn’t get to play again. Otto was cold for a while, but he went

“I was missing baseball, so I’m glad I played, even it was only for a short time,” Otto said. “It means a few more memories.”