Artists prepare for another year of Salisbury’s annual sculpture show 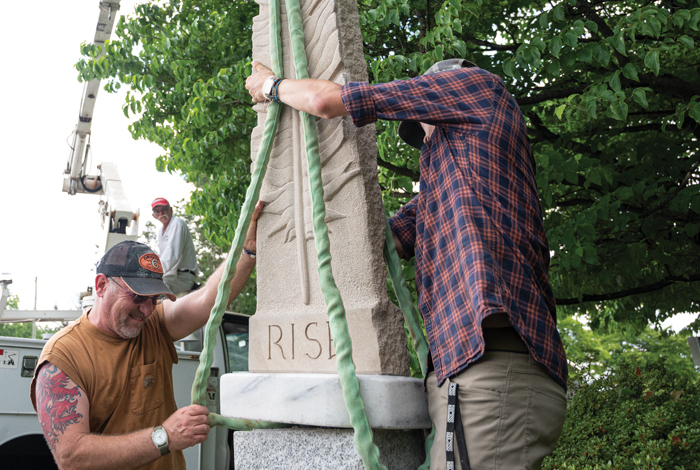 SALISBURY — What do pianos, window art and the Salisbury Sculpture Show have in common?

Alyssa Nelson, who supervises logistics of the sculpture show for the city of Salisbury as part of her work as an urban design planner, says they’re all things that contribute to the city’s charm.

“When I moved here, there were the pianos in the street and sculpture art around and, now, you can see art in windows of all kinds of downtown businesses,” Nelson said. “It’s all one part of Salisbury’s charm.”

Public art, from pianos to sculptures is for everyone, said Barbara Perry, chair of the city’s Public Art Committee.

“You can love it, hate it, touch it, shake your head and ask ‘what in the world were they thinking of?'” Perry said.

One week ago, 18 sculptures were installed across the downtown area and at other sponsor sites as part of the annual event. In City Hall, there’s a bronze bust of suffragist Lizzie Crozier French. Next to the Trolley Barn in downtown, metal Snoopy is flying a plane. And among the many others is a sculpture called “Icarus” in front of St. Luke’s Episcopal Church.

Paris Alexander, of Raleigh, designed “Icarus” and drew the name partially from his interest in mythology. His inspiration for the content on the sculpture came from a curiosity about creating a feather from stone.

“The dichotomy of a feather and rock has just been really interesting to me,” he said.

The sculpture’s three parts are limestone, granite and marble. And rather than power tools, Alexander relied on a hammer and chisel, working on the project every so often over the course of a year. It was a passion project, he said.

In front of the Salisbury-Rowan Utilities water plant is a sculpture called “Simultaneous Links,” by Jordan Parah, of Greenville. Her inspiration for sculptures often comes from natural elements and people and the idea for her inclusion in this year’s sculpture show came from a downtown building with a staircase, which wasn’t usable by made for great inspiration.

Parah has participated in the Salisbury Sculpture Show for several years and says public art is always important because it’s accessible to everyone. It’s fine art in a public space, she said. That’s especially important this year — when social movements and pandemics are changing ways of life.

“Everyone sees things differently and it’s good being able to share your perspectives with one another,” Parah said. “The wonderful thing is that public art can be enjoyed by anyone and art is meant to reflect our community. I’m inspired by our community and I think that, with everything going on, having something that unifies one another is more important than ever.”

Parah said she has been particularly grateful that Salisbury has done “a wonderful job of supporting the arts and supporting all of the artists that participate.”

Ruden said her piece, the bust of women’s suffragist Lizzie Crozier French, was made with clay first before a mold was made and bronze resin was poured in. The bust sits on a pedestal made of still. Ruden said she previously had a sculpture at the Rowan Public Library as part of the annual show.

The show has been around for more than a dozen years, and this year’s edition has been affected by COVID-19 gathering restrictions, with no official event celebrating the kickoff. It’s still a way, though, to get outside, Nelson said. And city staff are talking about other ways to make this year’s show special.

Nelson said plaques with short descriptions of each piece could be installed as soon as this week. And update of the smartphone application Otocast, where artists provide a verbal description of their work, is also set to launch this week along with website information about the show. Brochures will come later.

The full list of sculptures, artists and locations is as follows

City council to talk ‘Fame,’ use of tear gas…