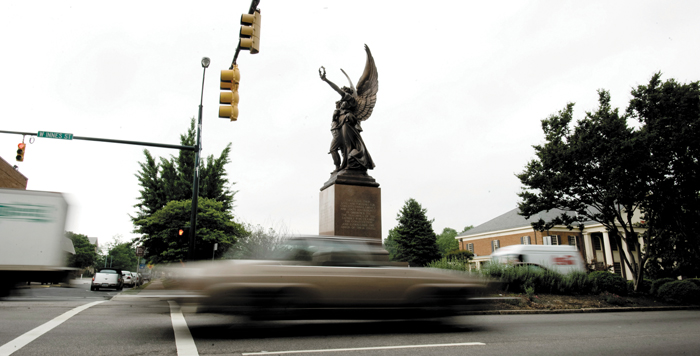 The Confederate Memorial statue of 'Fame,' the winged muse, holding a fallen soldier was dedicated in 1909 by the Hoke Chapter of the United Daughters of the Confederacy. It was a fund-raising project that was a decade in the making. Photo by Jon C. Lakey, Salisbury Post.

SALISBURY — The debate to relocate the “Fame” Confederate statue downtown has been reignited as some have deemed it a public safety issue in light of recent protests that led to gunshots fired at the site of the statue  recently.

And thousands have taken to one of America’s most fundamental rights to sign petitions in support of the relocation, while others have signed in support of defending where the historic feature stands in downtown Salisbury.

Two Salisbury High School alumnae, Bethanie Stauffer and Laura Bullock, have amassed more than 7,000 signatures on their online petition to relocate the “Fame” statue, noting that it glorifies “white supremacy and memorializes a treasonous government whose founding principle was the perpetuation and expansion of slavery.”

Stauffer said the statue represents a false version of history as the inscription glorifies the Confederacy and reads in a way that the Confederates won the war.

“The point is that we want to move it to a place that’s more appropriate like a cemetery or a museum,” Stauffer said, adding that the city could move the statue to the site of the Salisbury Prison, which she notes is “an important part of the Civil War.”

“Maybe not in the center of town, where it’s become synonymous with Salisbury,” she said.

Protests of racial injustice and police brutality have ignited across across the nation following the death of George Floyd, who is shown in a viral video dying after a Minneapolis police officer pressed his knee on Floyd’s neck for several minutes. In several cities across the nation, protesters have seized the opportunity with the conversation of racial injustice to damage or remove Confederate-inspired statues and monuments that have been debated for years.

The discussion to relocate the “Fame” statue was reignited and discussed for nearly two hours at a virtual City Council meeting on June 2.

Members of the Fame Preservation Group Facebook page saw the petition to relocate the statue and supported another one that was created to “keep Fame in its current location.” The petition currently has about 2,600 signatures.

Bullock said that regardless of the history, a symbol of racism and white supremacy is what is has become, citing the use of the Confederate symbolism in past white supremacy rallies, like Charlottesville, for example.

In the petition, Stauffer and Bullock address that notion.

“Some argue that moving this monument erases a piece of history that must be remembered; however, glorifying the confederacy erases black voices,” the petition reads. “In lifting up the confederacy, we ignore the pain and suffering endured by Black Americans both in antebellum and Jim Crow America and in the modern era. If what we want is an honest retelling of our history, we must recognize the immense wrong that was committed by the confederacy when its people chose to treat black Americans as less than human. In raising up confederate soldiers, we perpetuate the narrative that slavery was just.”

Stauffer said that though this debate has been sparked numerous times in recent years throughout the community, now  is an opportune time as racial injustice is on the forefront of people’s minds.

“Whenever something really bad happens and makes the news and shakes people up again, people are reminded of what the statue stands for,” she said.

Bullock said the move to another location would be a “very important first step,” but it’s not enough. Such action should be followed with political changes, policy changes and police force reform.

“It’s a very important first step in the city showing its solidarity,” Bullock said. “It’s highly symbolic, but it’s an important move for the city to say, ‘We don’t stand for white supremacy, and that is something we’re actively against.’ ”

At least two other petitions have been created on change.org calling for the relocation of the Fame statue. One has nearly 800 signatures while another has more than 1,400.

Fame Preservation Group has created another petition that has more than 500 signatures calling for the removal of Mayor Pro Tem Al Heggins from the Salisbury City Council, calling her “too divisive” to be a council member.

Heggins said she doesn’t believe different perspectives “makes you a divisive person,” adding that the criticism “just comes with the job.”

At the council meeting on June 2, Heggins began the discussion of relocating the “Fame” statue as the “space has become a bit of a lightening rod.”

She added that nonetheless, it’s “great that people are exercising their freedoms,” even those who she doesn’t agree with. Heggins also said “it’s fantastic” that members of the community are putting action behind what they believe in.

Editor’s note: This story has been updated to remove references to a person who was quoted at length with a pseudonym. That the person was allowed to be referenced was wholly inappropriate and a breakdown in the editing process that led to the decision will be addressed appropriately.