‘Must have been God’: Longtime friends reconnect after 36 years 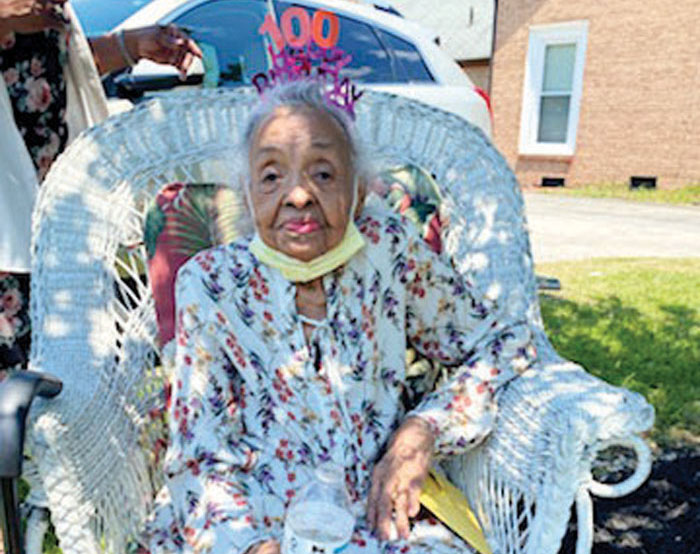 SALISBURY — The last time Anita Heggins had contact with her friend Isabelle Samuels was 36 years ago when she received word that the 60-something-year-old had died. But that all changed with a conversation with a friend.

In the mid-1980s, Heggins and Samuels lived in the same Marsh Street duplex. Heggins worked two jobs, one of which was in the healthcare sector. Samuels, who recognized that Heggins was often tired, would knock on the adjoining wall they shared and invite Heggins over for dinner.

The two women had many conversations over the nearly two years they were neighbors. They grew closer until one day Samuels was hit by a car after getting off the bus while crossing the street. She was seriously injured, which eventually resulted in some time in a rehabilitation facility.

“I moved to Third Street and she moved to Cedar Street,” Heggins said.

After the car accident and rehab, Heggins went to Samuels’ Cedar Street home to visit and was told by a neighbor that she’d died.

She looked for an obituary but never saw one.

It was two years ago that Heggins learned from a friend, Cheryl McLeod, that Samuels was alive. McLeod, who provides home healthcare services, told Heggins about a woman in her late 90s whom she believed needed someone to look in on her from time-to-time. The more McLeod described the woman, the more it piqued Heggins’ interest.

Heggins began to wonder if they were talking about the same woman. There were just too many similarities.

When the two women drove to Lafayette Street, McLeod pointed out where Samuels lived.

“Cheryl my curiosity is killing me,” Heggins recalled saying. “I knocked on the door. I heard that little voice. She just fell in my arms. She said Anita where have you been?”

Reunited at last, Heggins said she and Samuels talked for two hours. Salisbury is a small city, but it was just large enough that the two women had never crossed paths over the years despite remaining in Salisbury. Samuels said she didn’t know Heggins was still in North Carolina.

“I always thank Cheryl for that conversation. That must have been God,” Heggins said. 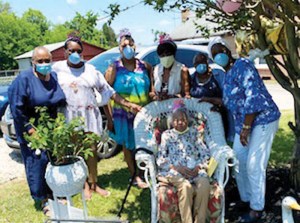 Included in the picture are Anita Heggins, Rita Johnson, Susan Russell and Cheryl McLeod and others who gathered to celebrate Samuels.

Samuels was born in San Juan, Puerto Rico, and was adopted when she was a child by missionaries who traveled often. Her adoptive parents would visit her birth mother, who was ailing, and when she died they adopted her. Eventually, the family moved to New York, and Samuels would later work in the garment district. She had a friend who lived in North Carolina and when they visited family, she would tag along, but she married and raised her two children in New York.

“Somehow in my 20s, my folks thought I should have a husband … that was the beginning of the end. Being young, I went along with it,” Samuels said with a small laugh.

The marriage was arranged by her parents and “he messed up,” so Samuels wasn’t married long. She spent some holidays in North Carolina and says she was amazed at all of the food that was served and the way southerners treated the holidays.

“I had never seen anything like that,” Samuels said, “I liked it here. Everybody was so nice.”

She would eventually settle in Salisbury after taking care of sick relatives. She never wanted to return to New York. She wound up with a job at a sewing company that was once located across from the Hefner VA Medical Center.

As to their reunion, Samuels said, “she heard I was here and she came.”

A week ago Heggins, Susan Russell, whom Samuels eventually hired for home care services, and Rita Johnson, a longtime friend of Samuels came together to host a birthday party for Samuels, who turned 100. Samuels was reluctant to have a party thrown in her honor.

“She said I’m tired of y’all bossing me around. I really don’t have to go anywhere because I’m 100 years old,” Russell recalled with a laugh.

Russell said she wanted to make sure a birthday celebration occurred, and she made some phone calls, one of which was to the Salisbury Police Department. The law enforcement agency arranged for officers to turn on their lights and sirens as they drove down the street toward Samuels’ home.

A few friends from Wagoner Realty, United Healthcare and Gethsemane Baptist Church as well as some who didn’t know Samuels all got together to celebrate. Samuels also received a birthday phone call from the folks at F&M Bank where she is a customer.

“I said no, no I don’t want no party. I didn’t feel like I was getting older,” Samuels said. “God has been very good to me. All my life I’ve had great faith in God. It is the reason for my long life.”

“I brought Marie down to visit her mother and that was the last time Mrs. Samuels saw her daughter alive,” Johnson said.

After Dickerson died, Johnson stayed in contact with Samuels.

“I kind of adopted Mrs. Samuels as my mother,” Johnson said.

Since 2013, Johnson has regularly traveled to visit Samuels. She visited last year when Samuels turned 99. And when the subject of celebrating her 100th birthday came up, Samuels told Johnson she “didn’t need all of that.” But Johnson loaded up her car and traveled from her home in West Virginia to celebrate.

“She’s quite independent and feisty, and 100 years is quite a milestone,” Johnson said.

In addition to surviving being hit by a car, Samuels also had two brain surgeries.

“I’m blessed to be alive, you know?” Samuels said.