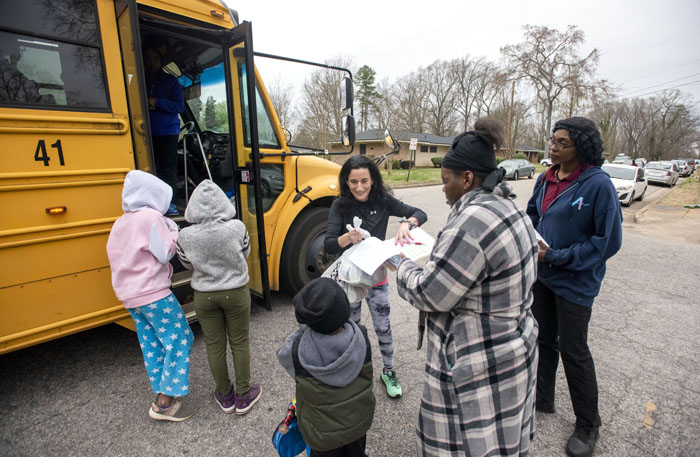 SALISBURY — As Rowan-Salisbury Schools considers options and possibilities for next school year, it has to answer questions like whether all classes should return to in-person instruction immediately and how school would look otherwise.

The N.C. Department of Health and Human Services released guidance for local education agencies on Monday outlining the requirement to be able to move all instruction online if needed. And Assistant Superintendent of Transformation Andrew Smith said Tuesday morning was spent aligning contingency planning with the guidance from the state. Those plans include the possibility that student density may be reduced to 50%.

Smith said the district believes the 50% requirement, dubbed plan B, is unlikely, and the district is keeping its own planning fluid as guidance from the state can change day-to-day. Shifts would be difficult for the schools, and even more so for families, Smith said.

During Monday’s Board of Education meeting, Smith noted the difficulty keeping students home for learning in the coming year could pose to families, many of whom will be returning to work in person or getting new jobs after projected rebound from the economic impact of COVID-19.

The guidance also includes a plan A, full reopening, and a plan C, which would be only distance learning, as well as the possibility of moving between them. The district has formed committees to analyze contingencies and plans to have something to show the Board of Education at its June 29 meeting and has been surveying parents.

The BOE looked at a survey outlining how comfortable parents would be with certain scenarios as well, and 4,655 people responded with 14,274 comments.

As part of the survey, parents ranked their own preparedness on a one to five scale. Those who rated themselves four to five, the higher end of preparedness, totaled 35%; the middle score of three was 24%; and the less prepared scores of one and two was 40%.

Parents were also asked how effective they think remote learning has been, with 36% giving middle responses, 31% giving good to highly effective responses and 34% falling at the bottom part of the scale.

Parents were also given several scenarios and asked to rate their comfort with the safety of each. Two options were the most favored. First was returning students to face-to-face instruction on Aug. 17 rather than the originally planned Aug. 4, with 48.5% of respondents ranking that scenario as a four or a five on the comfort level and 65.2% ranked it three or higher

The next most favored was beginning the year with remote learning before returning to face-to-face classes, which had 43.4% of respondents respond with a four or a five. About 65.2% ranked that scenario with a three or higher.

Returning for half days of instruction had the greatest number of respondents rank the scenario as a one or not comfortable at all, at 33.1%.

Another issue is how the pandemic will affect the incoming kindergarten class. Only 6% of the people who responded to the survey are parents of a rising kindergartner.

When asked if parents will send their rising kindergartners to school, only 68.1% of respondents answered “yes,” 24.8% were undecided, and 7.1% answered “no.”

Something which received an overwhelming positive response was if parents would be comfortable with kindergarten students being in classes with only 10 students, with 88.6% responding to that question with a “yes.”