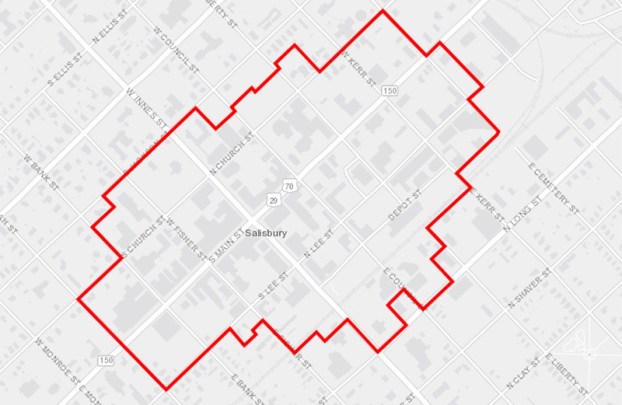 This map shows the boundaries of the municipal service district to which the emergency declaration applies.

SALISBURY — Mayor Karen Alexander on Tuesday rescinded a state of emergency in the downtown area, including the curfew that had been imposed after protests about police brutality escalated last week near the “Fame” Confederate monument.

The curfew started June 2 and had been in place for the municipal service district from 9 p.m. to 5 a.m. A news release Tuesday said it had been implemented “due to escalating, unlawful behavior by individuals related to protests.”

Alexander said there is no longer a need for the curfew as the latest protests across the city have been “very peaceful and very responsible.” She added that Salisbury Police Chief Jerry Stokes and other local leaders agreed on the curfew being lifted.

“Between Tuesday, June 2, and Sunday, June 7, protests within the city were in compliance with the curfew and were peaceful,” a news release said. “The Salisbury Police does not anticipate that protests, if they continue, will escalate in the manner that was anticipated when the State of Emergency was declared.”

The new order is effective immediately.

Alexander expressed a sense of pride for the local protest organizers as well as the “outpouring of support” from the community for the protests.

She added that the protests have provided a “great visual” for the community to come together and “improve our systems,” emphasizing the need “to solve the complex issues at our doorstep.”

“There are a lot of hurting people,” she said, referencing the current impact from George Floyd’s death, COVID-19 recovery, job losses and poverty in the community. “We have to find ways to have empathy for each other to move the community forward together.”