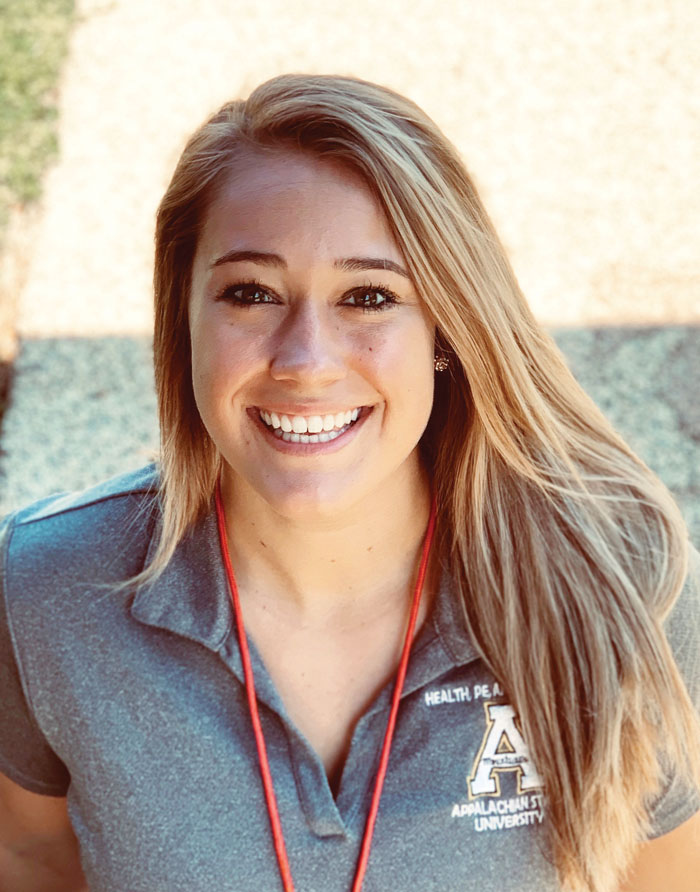 Davie AD Mike Absher was 36 when Adams was born, but he’s convinced Adams’ youth is far more of an asset than a liability.

“Right now, I think we really need her energy and we need her enthusiasm,” Absher said. “She’s got some extra pep. That will carry her a long way as we try to rebuild the program.”

Davie girls basketball, a program to be reckoned with for many decades, has fallen on harsh times.

“The past is the past,” Adams said. “I’m going to be positive about everything and I’m looking to build a program. I want to get more girls out for the team and as long as we do things as a team we can be a good team.”

While Adams has her work cut out, she has an impressive background.

She played her freshman and sophomore seasons of varsity basketball at Patton High in Morganton and helped Patton beat Freedom, the traditional powerhouse in Morganton, for the first time. She averaged better than 14 points per game in both seasons.

Adams transferred to Freedom for her last two high school seasons. She averaged 11.8 points on a strong team as a junior.

As a senior, she averaged 14.1 points per game and played on one of the more dominant teams in state history — 32-0, with 30 victories that weren’t very close. Seventeen of those games were of the running-clock, mercy-rule variety. That means Freedom was up by 40.

“We blew out teams,” Adams said. “Even in the playoffs.”

In the 2016 3A state championship game played in Chapel Hill, Freedom was tested but took a 53-50 struggle against Northern Guilford, which had 6-foot-5 Elissa Cunane, now a star at N.C. State. Adams made three 3-pointers in that game and scored 16 points.

“We had a lot of experience, five seniors, three who started and two who came off the bench,” Adams said. “I made some 3s that helped open driving lanes for my teammates. Our crowd was amazing, and our experience was the difference. Northern Guilford had a really good team, but they were a much younger team.”

Adams was All-Burke County three times and drew serious recruiting interest as her final high school season progressed, but she had signed early in her senior year with D-II Coker of the South Atlantic Conference.

“They were the first school to offer a full ride, and I signed,” Adams said. “I didn’t know much a lot about the recruiting process then, and that turned out to be a mistake as far as how far I went in basketball. By the end of that season, bigger schools like Georgia State and Appalachian State were interested in me, but I’d already signed. I learned a lot about recruiting that I’ll be able to help my own players with.”

Adams, a 5-foot-8 guard, got a lot of playing time as a freshman at Coker and averaged 7.3 points. She got five starts, but she wasn’t happy.

“I was so used to winning, Coker was losing, and getting better didn’t seem to be a priority,” Adams said. “It was tough.”

She transferred to Appalachian State where she was going to have a walk-on spot on the team, but that never quite worked out. There’s a lot of turnover on college coaching staffs. The assistants who had pursued Adams were gone by the time she was in Boone and eligible to play. She made the most of it, focused on academics and earned her degree in health and physical education.

She did her student teaching at Hickory, a major rival of Freedom’s. She also became an assistant coach for Hickory and coach Barbara Helms, one of the state’s most respected coaches.

“As soon as Coach Helms saw me in the hall, she said, ‘You’re coaching,’ ” Adams said. “I hadn’t planned on it. There was a lot of, ‘What are you doing on the Hickory bench?’ and Freedom people kidding with me that I was a traitor. But it was a great experience being an assistant. Coach Helms said she wanted my input and valued my input. There was a night when I knew my input helped us win a game, and that meant a lot to me.”

“You look at the winning programs that Lindsey had a chance to be part of and the caliber of coaches that she had a chance to be around and to learn from,” Absher said. “Those things have helped prepare her to be a head coach at 22. She also played the game at a pretty high level.”

When Adams saw the Davie job was open, she was interested. Her AAU travel team during her playing days, the Burke Jammers, was coached by Jeri Simpson Rooks, who raved frequently about what a great place Davie County was.

Adams, who will teach P.E. at Davie, is meeting some of her players (and parents) today for the first time. Those separate meetings will be conducted in Davie’s football stadium, a reminder of the special challenges in the year of the coronavirus.

“It’s a very tough time to become a head coach,” Absher said. “But Lindsey impressed us that she has a plan and a real vision for what the program can be.”

After an 0-25 season that included some 50-point setbacks to the better teams in the 4A Central Piedmont Conference, Davie only has one way to go.

Absher is confident Adams can lead those first steps back to being competitive.

“It’s going to take time and we know that, so we’ll define success a little differently,” Absher said. “Let’s build relationships with the players, parents and the middle schools. Let’s get the numbers back up. It has to start somewhere. Lindsey is the right person to get it started.”

Baseball: Spry has everything under control