Baseball: Spry has everything under control 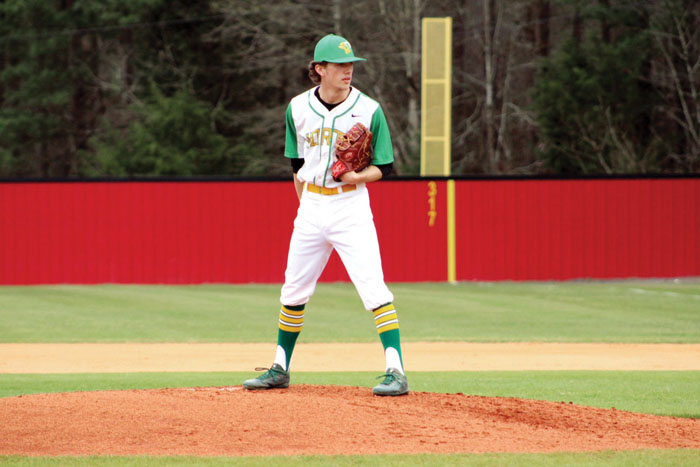 SALISBURY —  Recent North Rowan graduate Jonathan Spry was one of the pleasant surprises of the 2019 American Legion baseball season and plans to keep the surprises coming.

Spry is headed to Hudson’s Caldwell Community College & Technical Institute where he’ll get a chance to pitch as well as continue his education.

Caldwell made the decision in the fall of 2018 to add baseball and softball programs. Caldwell baseball went 7-8 in 2020.

Spry pitched with modest success for North teams that didn’t get a lot of attention, but things accelerated for him with the Rowan Legion squad last year, where the run support and defensive support were more consistent than what he’d experienced in high school.

Spry went 4-0 in Legion ball — racking up wins against Kannapolis, Mooresville, Chapin-Newberry in the NC-SC Challenge and Randolph County. He was a guy who wasn’t going to beat himself. He walked only five batters all summer.

He was at this best in the Chapin-Newberry game, relieving in the first inning, and then putting up zeroes in the second, third and fourth, as Rowan built a substantial lead that it was able to hold.

Spry actually threw the last pitch by a Rowan hurler last summer when he got Lexington-Davidson out in the top of the seventh of the season-ending playoff loss at Newman Park.

“Jonathan is quiet, one of those guys who just goes about his business,” Gantt said. “He’s competitive without having to jump around and be flamboyant about it.”

When Spry’s senior high school season started in March, new North coach Patrick Hampton was counting on Spry to be his pitching ace and to play second base or shortstop when he wasn’t pitching.

South Stanly beat North Rowan 15-1 in the first meeting of the teams, but South Stanly won 3-0 in the second meeting — a game that Spry started and finished on the mound. That turned out to be his last start of the season.

“Complete game against a really good South Stanly team with just 80 pitches, and they only got three hits,” Spry said. “Guys played well behind me. I knew after that game that we were going to have a really good season, but we didn’t get to play again. It hurt a lot. It broke my heart.”

Coronavirus not only crushed hearts and seasons, it severely limited recruiting opportunities for seniors.

Spry might not have gotten a chance to pitch past this summer, but Scott Maddox, an assistant at North Rowan, went to college at Wingate with Frank Pait, the head coach at Caldwell. Maddox told Pait about Spry.

Every baseball team needs pitchers like Spry, who can come out of the bullpen and throw strikes. Spry will get chances to help the Cobras.

“They like my movement and my ability to keep the ball down,” Spry said. “I rely more on movement than on velocity. If you can get ahead and hit spots, a lot of times guys will get themselves out.”

Hitting is timing. Pitching is upsetting timing. That hasn’t changed in the last 100 years.

“Jonathan changes speeds well, he throws strikes, and he fields his position well,” Gantt said. “He’s a high-character guy and a really good teammate. As his body matures, he’ll continue to get better and better.”

Spry will be part of Rowan County’s entry in the NC3 Baseball League. Rowan’s first non-league game is scheduled for June 20 at Newman Park, although attendance would be limited to 25 fans.

Still, it’s baseball, Not Legion, but close to Legion, and with Phase 3 scheduled to begin June 26, things should take another step toward normal. The first league game isn’t scheduled until July 4.

“I’m excited about playing,” Spry said. “I’ve been working out all summer, but it’s been hard not to be bored.”