SALISBURY — Rikki Baldwin on Monday was appointed the next principal at China Grove Middle School.

Baldwin’s hiring was approved by the Rowan-Salisbury Board of Education at its virtual work work meeting on the recommendation of Superintendent Lynn Moody. They made the decision after exiting a closed session.

Baldwin was chosen from 38 candidates who applied and came to the district from Montgomery County Schools, where she served as assistant principal at Mt. Gilead Elementary School. She starts on Tuesday and will replace Amanda Macon, who was named principal at South Rowan High School. 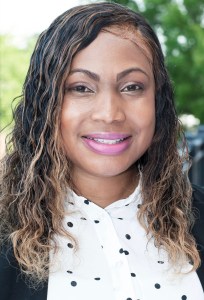 Submitted photo – Rikki Baldwin, who will be taking over as principal at China Grove Middle School.

She earned her bachelor’s degree in political science and African American studies and her master’s in curriculum and instruction from the University of North Carolina at Greensboro. She was awarded a post-master’s certificate in school administration from Gardner-Webb University and completed her doctorate in executive leadership studies there as well.

She told the Post her main goal as a newcomer to Rowan County is meeting the community, continuing growth and helping people stay positive amid the COVID-19 pandemic.

Baldwin said she was born in Maryland and her family is from North Carolina, but she did not move here until high school. Her uncle was the first black male principal in Scotland County.

Baldwin said she enjoys reading and spending time with her family. She and her husband have three children.

Also during Monday’s meeting, Superintendent Lynn Moody was granted emergency powers to make decisions that would normally require a board vote for items directly related to the COVID-19 pandemic.

Emergency powers previously were the subject of a board conversation that veered off the agenda of its May 28 called meeting. The issue of extending premium pay to more of the district’s front line employees ended with the agreement Moody could make the change, and the board officially adopted premium pay Monday night.

An example of an emergency purchase Moody gave included a large amount of hand sanitizer, more than $90,000, with one day to make that purchase before the opportunity passed because of the unprecedented demand.

Moody noted the ability to exercise emergency powers is not something she takes lightly.

The measure approved at the meeting drew some discussion after board member Dean Hunter pushed for some kind of secondary approval for emergency actions, adding he the board trusts Moody but doing so would add an extra layer of accountability.

Board Attorney Ken Soo noted the addition of consultation with the chair or vice chair to work around the issue. Board member Josh Wagner proposed an amended resolution which would require approval of the board chair to make emergency decisions, which the board ultimately adopted.