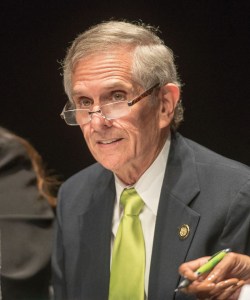 The tragic murder of George Floyd, too many senseless murders of innocent black men and systemic racism captured on cell phone cameras everyday have made the removal of the “Fame” monument a flashpoint in Salisbury.

Let’s be clear: I have opposed “Fame” for years.  Not because of the law or its exceptions, but because it’s wrong.

Confederate monuments are racist symbols, erected to intimidate slaves and to honor those who enslaved.  Those who believe Confederate monuments should be preserved as “history” refuse to recognize that, to many, history means slavery and Jim Crow, not a history to embrace or to perpetuate.

To preserve that mentality, North Carolina passed a law in 2015 prohibiting the removal of monuments unless to a “site of similar prominence” and not to a “museum” or “cemetery.” That standard is almost impossible to meet.  One exception allows “a building inspector” to determine that a monument “poses a threat to public safety because of unsafe or dangerous conditions.”  (No court has addressed this law. What does the word “a” mean? What does the word “determine” mean? What is a “dangerous condition?” Courts define words. Judges often disagree. What may seem obvious rarely is.)

The “public safety” exception has triggered unintended consequences. Engaging in confrontations at monuments may be a means for their removal. Floyd’s murder lit the match at “Fame.”

How should “Fame” be moved? Legally.

Where? I don’t know. Is any location safe?

Mayor Pro Tem Al Heggins proposed amending the agenda 10 minutes into Tuesday’s city council meeting without any notice to other council members.  This was city council’s fifth meeting on Zoom. No one had yet to appear on public comment. This time, 16 of her supporters spontaneously appeared (and lambasted me on social media). No opposition spoke.

That is not good government. My objection was to the lack of notice to me and to the entire public.

Virginia, with a zillion monuments, had a similar law. Voters elected a governor and representatives who changed the law. Now, its monuments are coming down. Virginia did it legally.

Citizens have told me that we “should not follow bad laws.” If each citizen decides what laws are bad, anarchy follows. In a democracy, bad laws can be changed.

Legal issues around “Fame” are tangled and different than other cities. The United Daughters of the Confederacy own “Fame.” But, does the UDC own the land beneath it? If not, the city can remove it.

Let’s review: In 1908, the Salisbury City Council allegedly passed a resolution that allowed the UDC to use the site “perpetually” for “Fame.” The minutes of that meeting disappeared.  At that time, Archibald Henderson Boyden was mayor. He was also a member of the Klu Klux Klan and a leader in the 1908 lynch mob — a proud racist. In 1927, Mr. Boyden, by then a private citizen, signed an affidavit recreating a resolution he said passed 19 years earlier and recorded it at the Register of Deeds.

Lawyers have advised city council that the term “perpetually” means the UDC owns the land under “Fame” forever. I have a beef with the validity and process (process matters) of the resolution itself.

North Carolina has very strict laws about transferring the ownership of land. Can a city council transfer land with a resolution? Was there legally required “consideration,” that is, a quid pro quo? Is an affidavit alleging what a resolution stated 19 years earlier legally binding? (Could former President George W. Bush affirm a lost Presidential Executive Order he signed two decades ago and make it part of today’s law?) I believe not.

Several citizens have contacted me about the city council reaching out to the UDC to negotiate a resolution. We have multiple times. The UDC refuses to  respond.

I hope the city would argue both dangerous conditions and improper grant. But, who pays the legal fees? Will taxpayers approve that use of their money? If the city loses, is there any risk of having to pay the UDC attorney fees? Is a private legal fund feasible?

David Post is a member of the Salisbury City Council.