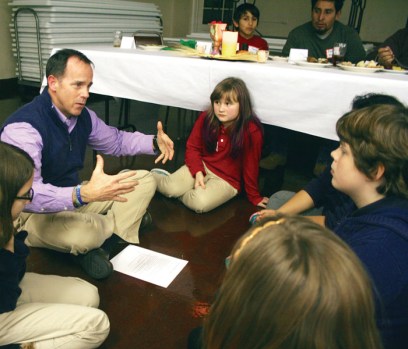 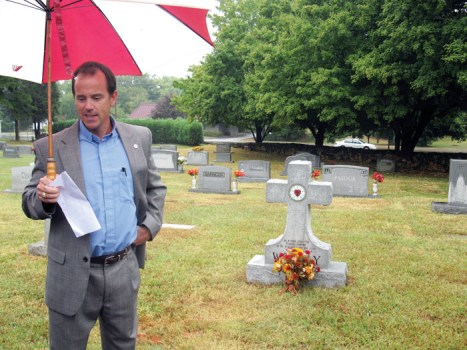 Woolly in front of his father's grave in Gastonia. Woolly's whole family made the Luther Rose on Don Woolly's marker. 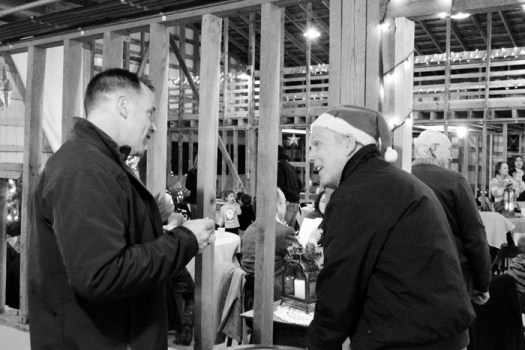 Pastor Rhodes Woolly with Franco Goodman, who chaired the church's call committee to bring Woolly to Salisbury in 2009. 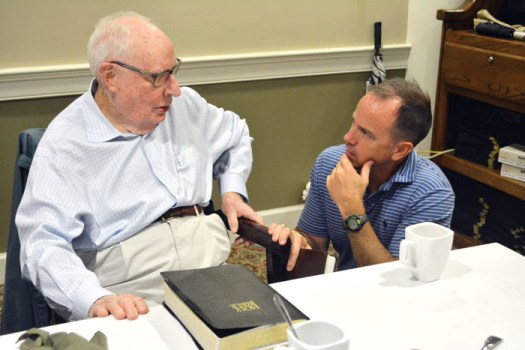 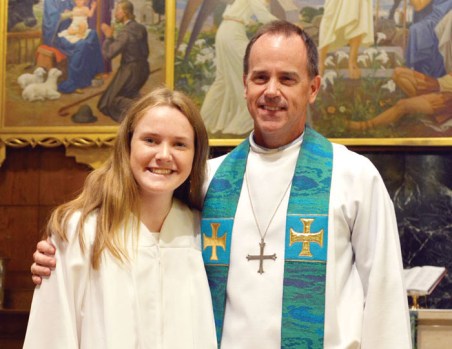 Pastor Rhodes Woolly with Anna Everhart on her confirmation day.

SALISBURY — For a long time, the Rev. Dr. Rhodes Woolly says he put off going to seminary. Not because he didn’t love the church.

His father, the late Rev. Dr. Don Woolly, was a pastor. A self-described “church nerd,” Woolly, 54, says he was at church every time the doors were open.

“But part of me knew the ministry was a safe place,” says Woolly, now senior pastor of St John’s Lutheran Church. “I wasn’t sure I wanted to choose the safe option. It didn’t feel like a call to me. I needed to explore something else.”

But Woolly eventually found his way to Lutheran Theological Southern Seminary in Columbia, S.C., and this year, he and wife Krista are celebrating their 25th year in ministry.

This spring, Woolly also completed a doctorate in community and congregational leadership from Emory University in Atlanta.

“It is important to have finished,” Woolly says. “I’ve always known Anna was graduating and Matthew was supposed to graduate.”

The Woollys have three children: Carter, who lives in Washington, D.C.; Matthew, who will graduate in December from N.C. State University, and Anna, a 2020 graduate of Salisbury High School.

Although the family still celebrated, Woolly and his daughter were disappointed that they didn’t get to walk across their respective stages.

“It was kind of a ho-hum ending,” Woolly notes.

Woolly received his undergraduate degree in political science, economics, and German from Lenoir-Rhyne University, and his master’s degree in international studies from the University of South Carolina.

He was working in Washington and talking with a group one night, walking with a school of high school students about social justice and advocacy. He soon realized that the faith-based part of the discussion appealed to him more than the political side.

He talked to his wife — who was then his fiancé. She had already found a job in Washington and was preparing to leave Columbia.

“He came home over Presidents Day weekend and said, ‘I really have been struggling,’ ” Krista Woolly says, and told her he was thinking of going to seminary.

Her response: “I’m not surprised.”

She’d never really thought about it, she admits, but when she heard the words, she knew they were true.

The couple married May 16, 1992, and four weeks after that, Woolly started Summer Greek, a class so intense that Krista Woolly called herself “a Summer Greek widow.”

Krista Woolly was able to keep her job with the S.C. Department of Vocational Rehabilitation. Son Carter was born during their internship year in Harrisonburg, Va. Matthew and Anna were born during the Woollys’ first call at Bethel Lutheran Church in Winchester, Va., where they served for 13 years. The previous pastor had been there for 29 years.

But Woolly didn’t come in with a heavy hand, says Bert Poling, an active member of Bethel.

“He had so much going for him,” says Poling, who babysat all three of the Woolly children. “His approach was very gentle and calming. Before you knew it, you said something you didn’t think you would say yes to. He was a gentle go-getter. It didn’t take long for the word to get out about Rhodes.”

In the Woollys’ time there, the congregation grew from having 60 members each Sunday to more than 300.

“The congregation was hungry for Christian leadership,” Poling says. “People came not just for fellowship. They were hungry to hear about the Lord.”

When St. John’s Lutheran Church in Salisbury was looking for a new pastor — again, after the previous pastor had a long tenure there — Franco Goodman made the initial call and talked with Krista Woolly. She is now director of the Community Care Clinic here in Salisbury.

“I had a delightful talk with Krista,” says Goodman, who led the search committee. “Brenda and I snuck up there to visit his church. We really were in awe of his presence even then.”

When Woolly moved to Salisbury ahead of his family, he stayed with the Goodmans for a couple of weeks.

“We were able to bond the ways that were unique,” Goodman says, including over a mutual love for chocolate.

The vote to bring Woolly to Salisbury in March 2009 was unanimous.

“You got the whole package when you got this family,” Goodman says.

“All along, I’ve assumed I’d take this time when the time is right,” Woolly says of the advanced degree. “It allows you to be engaged academically in a way that day-to-day ministry does not. I was starting to feel like I wasn’t caught up in critical thinking.”

Woolly started work at Emory in 2017 on a doctorate in community and congregational leadership. Over six semesters of study, his 12-person cohort — pastors from seven different denominations from around the country — focused on the broad category of “community and congregational leadership.” They spent significant time assessing themselves as leaders, their communities, and their congregations. There were other courses on worship, the Psalms, and theology, but all were presented through the lens of leadership. All made final presentations in their areas of interest.

Even though the pandemic thwarted some plans for the group to get together this spring, Woolly says, “We knew we’ve been planting seeds.”

As for his new degree, Woolly says, it has helped him think about how to be a better pastor in Salisbury.

“It was hard to read a chapter without thinking about St. John’s and Salisbury,” he says. “I think I have a lot more tools at my disposal to evaluate and assess.”

Cindy Fink, president of St. John’s congregation council, admires Woolly’s work as an administrator, and how he always thinks about how decisions made will affect individuals.

“He comes to every meeting prepared,” Fink says. “We don’t spend a lot of time looking at the past. We are moving forward. He is very forward-thinking, and I certainly appreciate that about him.”

“He’s such a hard worker,” his wife says. “It is his life’s calling and he thinks about it all the time. He’s so forward-thinking. I do love that he realizes the church has to change to reach out.”