Football: Leverett preparing for his big chance with Bucs 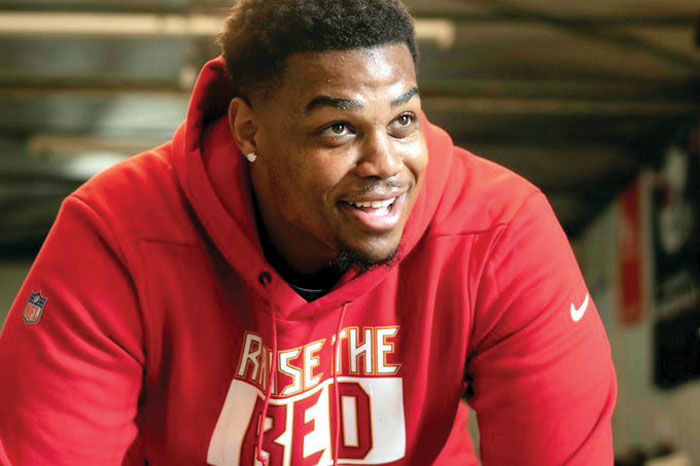 DURHAM —  There are two Nick Leveretts.

There’s the sweet soul who feeds the homeless, the studious kid who grew up playing the piano at church and already owns a masters degree.

But there’s also the offensive lineman who trains relentlessly, straps on the shoulder pads and moves defenders around football fields with nasty enthusiasm. That Leverett is 6-foot-4, 310 pounds and mean, and while his football games have been on Fridays and Saturdays in the past, they may be on Sundays and Monday nights in the future.

He trains in Durham and will be in camp with the Tampa Bay Bucs as a guard prospect looking to block for a 42-year-old quarterback, Tom Brady, who owns six Super Bowl rings but can’t outrun his offensive linemen. Brady will need a lot of protection.

The Bucs plan to open training camp on July 21.

“I grew up about five minutes from Catawba,” Leverett said. “Dirt road. Country.”

Leverett’s early appearances in the sports pages of the Post came from an unexpected venue. The big guy had surprising agility and was winning tennis matches in the spring of 2011 for North Rowan Middle School.

By his junior season at North Rowan High, Leverett was starting to dominate on the football field. That was the fall of 2013, and coach Joe Nixon had the Cavaliers rolling. Before they lost to Shelby in the third round of the playoffs, they were 13-0 and ranked No. 1 in the state in 2A. Running back JaReke Chambers broke school records. Part of that was Leverett, who had grown to almost 290 pounds. There was a two-week stretch in October in which Leverett registered 19 pancake blocks against Central Carolina Conference opponents.

Leverett turned in a terrific senior season for the Concord Spiders. He made his debut in the black and gold in a heated “Bell Game” against A.L. Brown. He earned a selection to the Shrine Bowl squad.

“That was a great opportunity and I played against some tough guys in the Shrine Bowl,”  Leverett said. “But I didn’t get that many looks. I was under-recruited.”

He was going to go to D-II Winston-Salem State, but North Carolina Central, an FCS school, made him an offer a day before Signing Day. That was his first — and only — D-I offer. He visited and loved the school. He headed to Durham.

The historic HBCU proved a great fit for Leverett socially and academically.

As far as football, there was the standard humbling redshirt year that most recruits endure, but Leverett used it to his advantage. He not only gained strength and devoured the sweet science of X’s and O’s, he got way ahead in the classroom.

“I set a goal for myself to graduate in three years, and I did it,” Leverett said. “My fourth year at N.C. Central, I was working on my masters.”

As a redshirt freshman in the fall of 2016, Leverett immediately moved into a starting position as a tackle. He had 35 pancake blocks. When N.C. Central won 34-31 at Norfolk State, Leverett was named the Offensive Lineman of the Week for the Mid-Eastern Athletic Conference. He was third team all-conference.

His most memorable game for N.C. Central came that season when N.C. Central beat rival North Carolina A&T in an emotional game to take the conference championship.

In 2017, Leverett again started every game at tackle and was second team All-MEAC. He had 53 pancake blocks and allowed only three sacks. He was honored as the league’s Offensive Lineman of the Week  after he turned Delaware State into his personal punching bag.

In 2018, Leverett started every game at left tackle for the Eagles and was second team All-MEAC. He graded out 93 percent on his blocking assignments. He had only two sacks and three penalties for the season.

There were more highlights after that 2018 season. Leverett was one of the 11 FCS players named to the Allstate American Football Coaches Association Good Works Team, the All-America team for service on campus and in the community.

Leverett, who listed FBI agent as his career goal, graduated early with a degree in criminal justice and a 3.37 GPA.

Because of that redshirt year, Leverett still had a year of football eligibility. He used it at Rice University in Houston. It was a chance to test himself on a bigger stage against some major recruits.

Leverett started every 2019 game for the Owls at left guard. He was Honorable Mention All-Conference USA. He allowed only two sacks on 320 pass plays.

“At N.C. Central, we always played Duke, but at Rice I had a chance to play against Texas, Baylor, Wake Forest,” Leverett said. “Texas had bigger, stronger guys than I’d faced before, but I had one of my best games against them. The football gap, going up from N.C. Central to Rice wasn’t as large as you might think. The biggest difference was the meals, in how well we ate at Rice.”

Off the field, Leverett earned a Master of Arts in Global Affairs, which should lead to a successful career once football is over.

But Leverett isn’t ready to use his degrees yet. He has every intention of playing football at the highest level.

The NFL draft on April 23-25 didn’t include Leverett. He watched it all and had hopes of being picked on the third day when rounds 4 through 7 were conducted.

April 25 was one of the harshest days of his life, but it also one of the best days. He ran through a lot of emotions in a matter of hours.

“Some people had me projected as a late-round pick,” Leverett said. “So it really was disappointing when my name was never called. But teams were texting me by the time the sixth round was going on, telling me they were interested in signing me as a free agent after the draft. So while I was disappointed and I was kind of down when that last pick was made, I never got frustrated or mad. I knew I still had a chance.”

Leverett’s agent called him within minutes after the draft’s conclusion to let him know there was good news. There was a firm offer from Tampa Bay.

“It happened really quick,” Leverett said. “Tampa Bay was one of the teams that had shown a lot of interest, one of the teams where I’d already taken a good look at the depth chart. It’s a great fit. It’s the best opportunity I could have asked for. I was good to go.”

There’s a signing bonus involved — $5,000 — but major money will be part of the equation only if Leverett can make the Bucs’ 53-man roster. Teams also can have an expanded 12-man practice squad this season, and players on the practice squad make a nice living doing what they love. The minimum salary for a practice squad member is $8,000 per week.

The coronavirus has drastically altered the NFL timetable. There have been several delays of the normal reporting periods, but Leverett hasn’t been sitting around, waiting for something to happen.

There are virtual meetings with the Bucs to attend.  There are daily film sessions, and he embraces that aspect of the game like a coach. He runs every day. He works out diligently in Durham.

“I work out at a gym run by one of my best friends,” Leverett said. “Very old school. Squat racks and dumbbells.”

Not long ago, Leverett was in Charlotte and met Javon Hargrave, the former North Rowan Cavalier who is now a highly paid NFL star with the Philadelphia Eagles.

Hargrave made it big coming out of Rowan County. Like Leverett, Hargrave got a shot because of an HBCU/FCS school.

There’s the quiet scholar who has stayed humble while the honors have piled up.

But there’s also the aggressive football player with the confidence and the incentive to make it big.