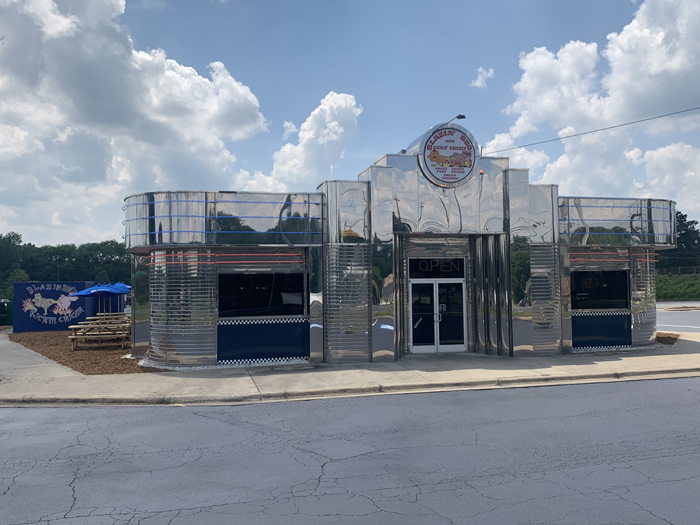 LEXINGTON — When Jason Rogers was 3, his parents found him in the kitchen in the middle of the night. They had been asleep. Everything was out of the cabinets, he said.

“I love cooking,” Rogers said. “I’ve always been infatuated with trying to make a great dish.”

Rogers worked at Tommy’s BBQ in Thomasville for 30 years, but always had a dream of having his own place, he said.

Lately, all of the cooking TV shows he’s watched — “every cooking show, I’ve watched it,” he said — all the time working at Tommy’s and all of the restaurant experience he gained on his two bread routes is coming in handy.

When Rogers saw that the former Lexington Family Grill or Silver Diner was for sale earlier this year, he had to do something. He bought the building on May 1 and then cleaned and prepared it to become Blazin’ BBQ and Kickin’ Chicken, which will open Monday for breakfast.

Rogers said that he hesitated doing all of this during a pandemic. At the encouragement of someone at Tommy’s, though, he realized “now’s the time.” He could clean and prepare while all restaurants were closed for dine-in options anyways.

The dream started back at his work at Tommy’s, Rogers said, where he was first shift manager. He handled breakfast by himself. While he worked there, he wondered what it would be like to own his own restaurant, he said.

Rogers didn’t always have the money to be able to open a restaurant. But he bought one bread route with Flower’s Baking Co., and then another. Now, he’s getting to share his food with others.

His family, especially his wife Stacy and their three children, have been part of the process of getting ready. Stacy is a fifth-grade teacher at North Hills Christian School in Salisbury, where her children also go to school. Before that, she taught at Overton Elementary for 17 years.

She’s grateful that this has been happening in the summer, when she isn’t in school.

“I’m pretty much here as support for him,” she explained. “This has always been a  dream of his.”

Even though she says this dream of having a restaurant is her husband’s, Stacy is committed.

“It feels like they’ve lived here,” she said about the amount of time the Rogers children have been spending at the restaurant lately.

“It’s been a lot of work, a lot of cleaning,” Jason said. The inside of the place used to be painted peach, tan, green, he said. Now, that’s been replaced with burgundy, black and gray.

Her teaching experience has also come in handy with the restaurant. Stacy uses technology in the classroom and was able to draw on that when she designed the website and menu for the new restaurant, she said. She’s also been helping with cleaning the place to get it ready for opening.

The Rogers family lives between Salisbury and Lexington, she said, so they are often in Salisbury other than her teaching, she said.

Supporting her husband has been satisfying for her too.

“It’s been neat to see him get so excited about it,” she said.

What makes Jason so excited is the food. He says that his favorite type of food is fried chicken.

That love for fried chicken has translated into the menu of Blazin’ BBQ and Kickin’ Chicken. The restaurant is going to be the first in Davidson County featuring a broaster, he said. Chicken will always be served hot after being marinated for four hours, rolled in coating and dropped in the broaster for 10 minutes.

That is in addition to the barbecue, of course. The lunch and dinner menu features plates with wings, pork chops, rotisserie chicken, chicken strips and chicken breasts as well. Everything is going to be homemade, Jason said.

He’s been taking precautions to deal with opening during a pandemic. They’ve installed a drive-thru option since the Davidson County Health Department has limited the diner to 64 customers inside. Customers will only be seated in every other booth. There will also be increased sanitation attention to things like door handles.

The restaurant is located on Talbert Boulevard in Lexington. Jason says he has hired 25 people already.

It will be open Monday to Saturday from 6 a.m. to 8 p.m. and Sunday from 7 a.m. to 2 p.m., although employees will not have to work Sunday if they don’t want to, Jason said.

Beyond the food, he wants his restaurant to be a place for people to gather. There won’t be TVs inside. Oldies music will be playing, he said.

He’s also committed to doing a different kind of discount every day of the week, he said. For example, seniors get free coffee on Tuesdays.

“Food makes people happy. It makes me happy if it’s good,” he said. “I’m not here to get rich. We’re here to supply good food to the community, hire great staff, and help the community.”