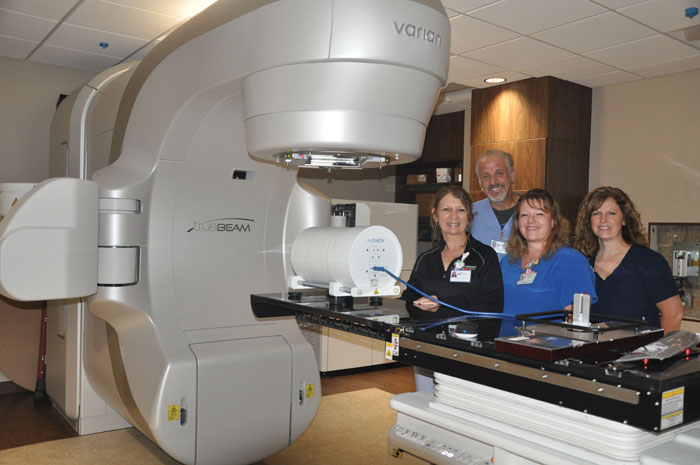 SALISBURY — If you were getting treated for cancer with radiation 20 or 30 years ago, the radiation being used typically had a broad beam. It might kill nearby healthy cells in addition to the cancerous ones being targeted.

Since then, the technology has advanced, says Rick Parker, director of the Rowan Medical Center Foundation. And last week the Wallace Cancer Institute installed a new linear accelerator, which does radiation.

“Now we have this technology in which the beam can actually be focused and adjusted so that it meets the needs of the actual shape and size of the tumor,” Parker said.

The new technology is called a TrueBeam and is made by Varian.

Parker said that the replaced machine had been in use for more than a decade. Replacing it was part of the vision to create the Wallace Cancer Institute in the first place, he said.

A medical linear accelerator is a machine that delivers radiation to a cancer patient very precisely, said Matt Daniels, a board-certified medical physicist with Landauer. A team of engineers with Landauer has been working this week to commission the machine so that it is set to treat patients.

Radiation is a natural process of atomic decay, said Tim Durant, a professional engineer with Landauer. The TrueBeam is able to create different types of radiation that do different things. For example, on-board imaging uses x-rays to give doctors images of the patients as they are setting them up to receive other radiation to treatment.

Then, the machine can deliver radiation at various levels of energies depending on where the tumor is and how deep it is, Daniels said.

The machine is also equipped to perform pinpoint radiation that targets the tumor very precisely, Daniels said. In brain surgery, for example, that can be really important. Missing would mean damage.

The Landauer team that came in after the physical installation to finish setting up the machine has spent a lot of time carefully collecting data, Daniels said. The data is used to build a model of the machine in software, which doctors use during treatment, Durant said.

The creation of the new, 32,000-square-foot facility has been a process over the course of years. The idea was to make one destination within Novant Health Rowan Medical Center for cancer treatment, as opposed to having patients visit different locations for different parts of treatment, Parker said.

“We take to heart the things that our patients need, and one of those things is for services to be under one roof,” he said.

Overall the creation of the institute involved a $24 million fundraising effort, Parker said. The Novant Health Rowan Medical Center Foundation has committed to raising half of that amount in a capital campaign, to be matched by Novant Health for the second half. The new radiation unit alone cost $3.4 million, Parker said.

The capital campaign is wrapping up at the end of July, Parker said. Construction for the building began in July 2019.

In addition to having radiation oncology and medical oncology onsite, the institute will also have other features. For example, the infusion rooms feature windows looking out onto the Hurley Healing Garden, which was especially designed for something to be beautiful in it in all seasons, Parker said. A Look Good-Feel Good boutique will also provide special creams, makeup, wigs and other items for cancer patients.

The institute is set to open Aug. 15, Parker said. Construction is nearing completion.