SALISBURY — A Salisbury man is wanted on vandalism related charges after he was seen on surveillance cameras tossing a rock into a Salisbury Post window during a protest Monday night and early Tuesday.

The Salisbury Police Department is looking for Harvey McCorkle III, 30, on felony charges of damage to property and inciting a riot.

McCorkle is accused of tossing a rock through a front window of the Salisbury Post during protests that stretched past midnight and into Tuesday morning. More than 200 people gathered along West Innes and South Church streets, some in front of the Confederate statute “Fame.” 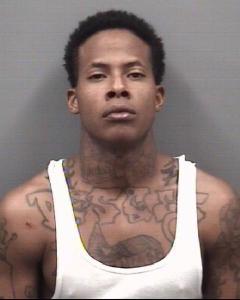 The peaceful protest began to go awry when protestors thought they spotted Jeffrey Alan Long, a Kernersville man who was arrested Sunday for firing a gun into the air during the downtown Salisbury protest that day. Someone said they thought they spotted Long, and a group of people chased the man until police were able to stop them. The man was standing on the steps of nearby St. John’s Lutheran Church and police have said it was not Long.

Salisbury Police said protestors then began throwing rocks and bottles at law enforcement clad in riot gear, which led to the deployment of tear gas to move the crowd from that area.

The estimated value of the damaged window was $1,036. The window also featured a mural and a portion of the portrait on the window pictured a police officer, a child and a firefighter pointing up toward the United Way logo. The Rowan County United Way is housed on the second floor of the building. The artist estimated the value of in-kind labor, supplies and material used to paint the mural at $500, making the damage to both a felony, said police spokesman Lt. Lee Walker.

Walker said they were able to identify McCorkle because he was seen on video throughout the night wearing distinctive clothing — a white shirt and white pants. 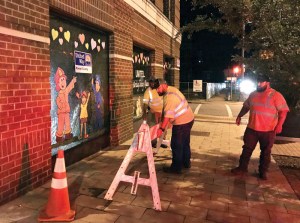 The street division from the City of Salisbury puts a barricade around a window at the Salisbury Post after someone threw a rock into it during the protest. Photo by Andy Mooney, Salisbury Post.

He was the only person that night wearing a white shirt and white pants and he was spotted on video multiple times. A person in the same clothing was shown on camera throwing the rock through the window, Walker said. A Salisbury Post employee who was in the building at the time said he heard the window break at about 12:15 a.m.

Explaining the issuance of the inciting a riot charge, Walker said the chaos began before the rock was thrown, but added that video showed several people who tried to “calm him down” the entire night and McCorkle was “out of control.”

In a statement sent to the Post, Salisbury-Rowan NAACP President Gemale Black said he met with Salisbury Police Chief Jerry Stokes and Major Shon Barnes regarding concerns he has listened to over the past few days. Black said he demanded the police bring additional charges against Long, and police followed through by issuing warrants for inciting a riot.

Protests reignite debate about whether to move ‘Fame’ Confederate…