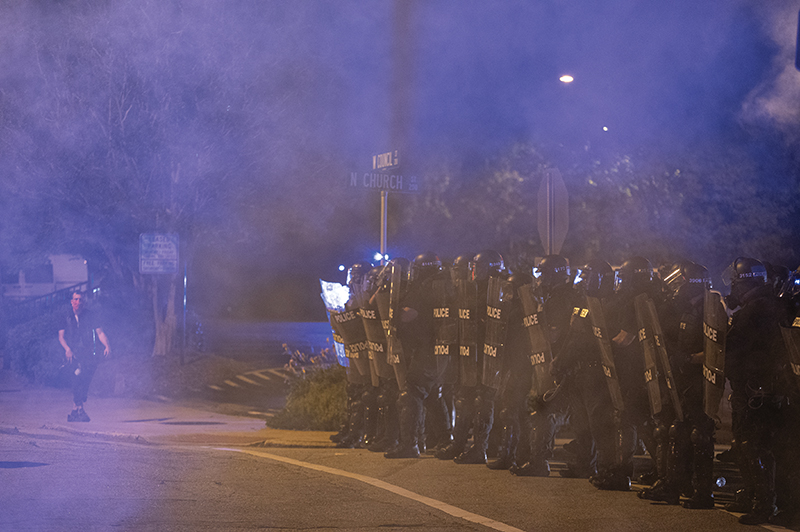 SALISBURY — Downtown protests took an unexpected turn Monday night when some protestors believed they saw a man who was arrested Sunday for firing into the air during a previous protest.

A group of between 200 and 250 people gathered downtown, some near the Confederate statute “Fame” and others at nearby St. John’s Lutheran Church, at the corner of North Church and West Innes streets. A Civil Emergency Unit, made up of Salisbury Police, the Cabarrus County Sheriff’s Office, Mooresville Police and the Rowan County Sheriff’s Office, wore tactical gear and lined the streets, some of which were barricaded.

An N.C. State Highway Patrol helicopter hovered overhead as the people continued to gather for hours. The crowds didn’t disperse until after midnight.

Salisbury police spokesman Lt. Lee Walker said someone told police they believed they spotted Jeffrey Alan Long, the Kernersville man who was charged this weekend with firing shots into the air during the second day of protests. People began to chase the man from where he was standing, on the steps of St. John’s Lutheran Church, and another person who was with him until police were able to stop them and positively identify the man being chased.

Walker said the man was not Long.

The man was chased from the intersection of West Innes and North Church Street toward Council Street where other members of the Civil Emergency Unit were positioned.

Some members of the Civil Emergency Unit were pelted with rocks by bystanders. Walker said some officers received minor injuries that did not require emergency care. At least one person, a woman, was seen by emergency responders after law enforcement deployed tear gas.

Walker said the decision to use tear gas was one made after bystanders began throwing rocks in an effort to move the crowd back toward the center of protests in front of the “Fame” statute.

Long has been charged with two counts of carrying a concealed pistol/gun, carrying weapons at a parade and one count of discharging a firearm in the city limits, with some of those charges added after his initial arrest. He has since been released from the Rowan County Detention Center.

According to Salisbury Police, some protestors met at the Big Lots parking lot and walked downtown. Shortly after midnight as law enforcement began dispersing the crowd, someone threw a rock through a front window of the Salisbury Post.

One Post employee who was inside the building reported hearing a thud at about 12:15 a.m. No arrest has been made and the incident has been turned over to the police department’s detective unit.