‘Keep it peaceful’: Gunshots ring out as protesters gathered 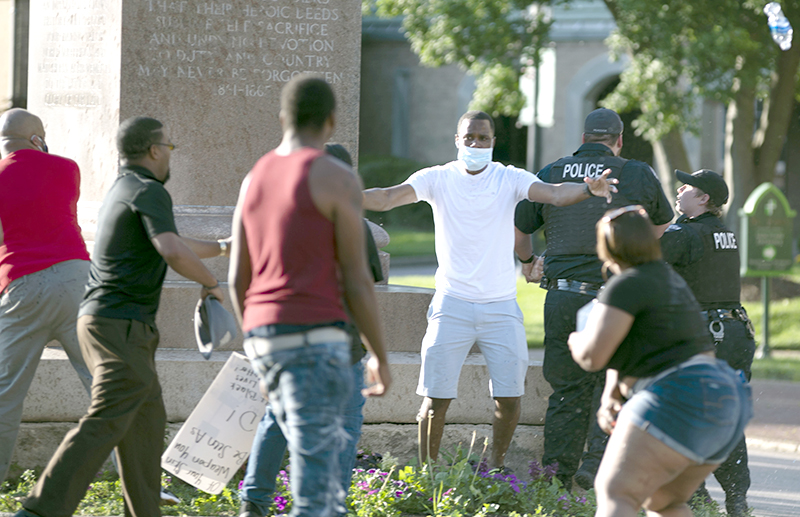 Josh Bergeron / Salisbury Post - Salisbury- Rowan NAACP President Gemale Black, in white shirt, holds back protesters as police arrest a man Sunday after he fired shots in the air during a peaceful protest.

SALISBURY — When shots erupted beneath the wings of the city’s Confederate monument “Fame” on Sunday, simmering tensions began to boil and two men were arrested.

Peaceful protests on Saturday and Sunday drew attention to recent killings of black Americans, including George Floyd, who died after a Minneapolis police officer pressed his knee into the man’s neck for several minutes.

The largest protest on Saturday took place via car in the afternoon; participants blared their car horns and held signs out of car windows. A smaller group of people gathered at the Square that night and briefly walked to the Confederate statue and chanted at a small Confederate group that had gathered. While police shut down roads for a time on Saturday night, both protests occurred without incident.

When protesters returned to downtown on Sunday, they gathered at the intersection of Innes and Church streets, adjacent to the Salisbury Post’s building and the statue. A Confederate group stood across the street. As protesters chanted, they directed some of their words toward the group across the street; witnesses told the Post the Confederate group responded with words of their own.

Salisbury-Rowan NAACP President Gemale Black said a man from the Confederate group antagonized protesters on the other side of the street by threatening to kill them.

Black said he asked nearby police officers to move closer to the scene when it became clear tensions were rising.

“I told them I don’t know if I can control everybody that’s in the crowd and keep it peaceful,” Black recalled telling police officers.

Two to three shots rang out, and participants in the Black Lives Matter protest immediately turned to the same nearby cops with which Black had just spoken. Those officers detained Jeffrey Allan Long, 49, of Kernersville, and charged him with two counts of misdemeanor carrying a concealed pistol/gun and one count of misdemeanor discharging a firearm in city limits. 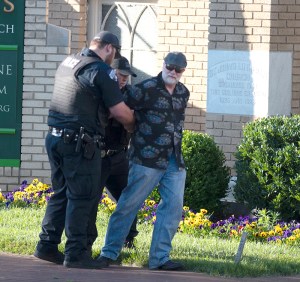 Neither Black nor the local NAACP organized Sunday’s protest, but members took a leadership role in keeping the crowd peaceful once shots were fired. Black and Pastor Anthony Smith put themselves between a crowd of protesters and Long when he was being detained by police officers.

Within minutes of the incident, there were a dozen police cars on the scene. Officers from nearby jurisdictions, including Kannapolis, were also called to downtown Salisbury.

A Post reporter observed police with three men on the ground in the former Wells Fargo parking lot. One of those men was Brandon M. Walker, 34, who was charged with misdemeanor carrying a concealed gun. The city said police officers witnessed Walker place a handgun under a car and that he and men with him were searched as a result.

The two other men were released without facing charges, Black said.

Protesters walk through an Innes Street crosswalk at the Square.

‘Heard and not labeled’

Men who remained at the scene of the shooting and identified themselves as part of the same Confederate group declined to comment.

A Facebook page calling itself the Fame Preservation Group late Sunday night said its members were guarding the monument from being attacked, damaged or toppled. And one of its members, who declined to provide his name, said there were multiple groups present on the north side of the street — not one unified group. The Fame Preservation Group denounced and disowned Long as well as saying Floyd’s death should serve as an example of the need to change the way law enforcement act toward American people.

“Our monument guard did its very best to keep the peace and stay calm even with them being provoked and shouted down at,” Fame group said in a Facebook post. “We understand the protesters. We denounce police brutality. We just want to be heard and not labeled.”

Salisbury Mayor Karen Alexander said that the city supports peaceful protests but would not tolerate any kind of violence or intimidation.

“There’s no need for guns at all for a peaceful protest,” she told the Post. “Stay apart if you’re on opposing sides of an issue and express your free speech but avoid violence.”

She asked all citizens to respect other protesters. 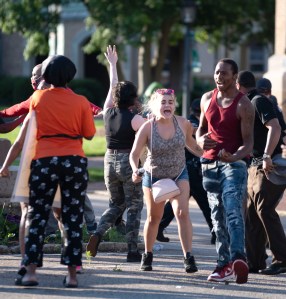 Josh Bergeron / Salisbury Post – People scatter from the scene of a protest during which shots rang out.

After police arrested Long, the Black Lives Matters protesters moved through downtown, chanting, shouting and holding up homemade signs at cars passing through the Square. Their march continued south to the intersection of Innes and Arlington streets. A North Carolina Highway Patrol helicopter hovered close by. Cars blared their horns. Others revved their engines as they sped away.

One of the marchers was 13-year-old Nehemiah Mason, who was participating with his father.

Mason said he thought the protests that took place Sunday were for a good cause. That was particularly the case, Mason said, because he would have been dead if he had fired shots into the air in downtown.

“We’re just trying to fight for justice and all the people that have been killed by the police,” he said.

Mason said one of the first steps toward justice needed locally is for the “Fame” Confederate monument to be taken down. Other protestors who spoke to the Post, including 31-year-old Anthony William, said the same.

“The past has to make way for the future,” William said.

The Black Lives Matter protesters would later return to downtown and the Confederate statue — where they remained in large numbers until police shut down several blocks to vehicular traffic in the area. 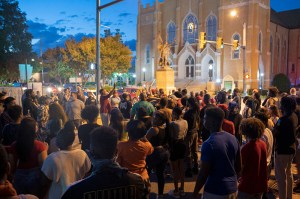 A crowd of people remained near the “Fame” Confederate monument late into the night.

Specifics about the status of the men arrested remained minimal throughout Sunday and through most of Monday. When it released information Monday afternoon about charges filed, the city clarified that only Long fired a weapon. It had previously said both Long and Walker shot near protesters.

Mayor Pro Tem Al Heggins said people in Salisbury are hurting now and that they want to be heard.

A specific item for the Salisbury City Council, she said, should be passing and implementing an equity plan.

Two in custody after gunshots fired near Confederate statue