Whirlwind romance: Tale of how Randy, Diana got together started 50 years ago 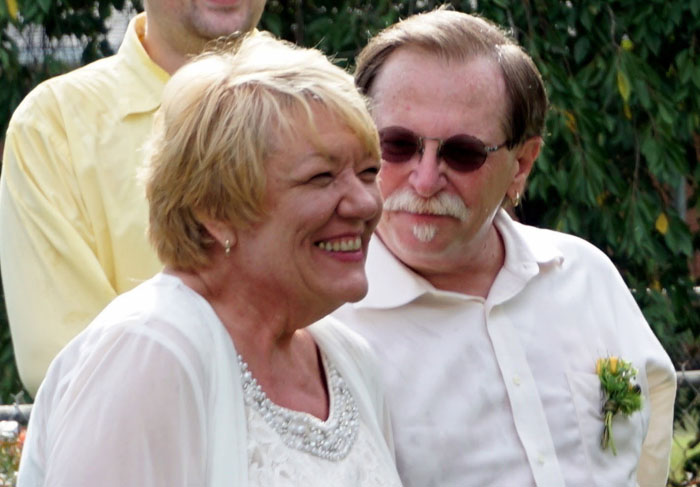 Many know Diana Cummings by her former name, Diana Moghrabi. A senior administrative assistant for the City of Salisbury Planning Department, she supports neighborhoods, boards and commissions and citizens.

She’s served as the secretary for the Planning Board, Zoning Board, Housing Commission and Neighborhood Leaders Alliance for over 16 years. Thousands of Salisbury citizens have worked with her at the city’s annual Blockwork event in October.

Diana and Randy Cummings married on July 20, 2019, just weeks after finding each other. But they will tell you it was a whirlwind romance that started 50 years ago.

It all started in Charleston, West Virginia. Diana Brackett was just 14 years old; Randy was 16. A mutual friend called Randy to talk to Diana, on a hunch they would hit it off. She was correct.

Diana was an “A” student in school, enjoying band and dance. A star dancer, she briefly taught dance classes at age 12 when her dance teacher was out for surgery. Because of her dad’s military career, the family moved often.

Randy was a passable student, most often making “C’s.” He just didn’t care for school, although two years of Russian class captured his attention. He sang in the chorus, cut classes and sported shoulder-length hair. He played bass in a band, performing at festivals and school dances.

That first phone call started a flurry of movie dates and talking for hours on the phone. He lived 17 miles away, so he hitchhiked to her home for visits.

“Of course, there were no cell phones back then,” Diana smiles. “So he would show unannounced!”

Randy and Diana continued to see each other until Diana’s family moved to New Jersey. There were lots of letters and the occasional phone call. Long distance calls were pretty expensive at the time, and Randy acknowledges he wasn’t the best at writing letters.

In 1973, Randy had graduated high school and was working at a steel mill in Michigan. Diana was in 11th grade. That summer he hitchhiked to New Jersey for a visit. Like other visits, this one was a surprise.

They laugh about it to this day.

After Randy and Diana enjoyed a day at the shore and a couple of meals, Diana’s father bought Randy a bus ticket home and drove him to the bus station.

The next year, when Diana was 18, Randy’s brother bought Diana an airplane ticket to visit Randy for his birthday. She stayed just a couple of days but had to return to her job in Charlotte.

Both of them continued with their individual lives. They spoke briefly on the phone in 1980, but Diana had married, so she “brushed him off.” The next year, after her daughter was born, he called again, saying he had business in Charlotte and would like to meet.

She selected a grocery store for a meeting. “I figured it was a public place, and what harm could there be in just talking?” she says.  They talked for an hour. The spark was still there, but both had families to whom they were committed.

Randy didn’t look for Diana again until 2015. He searched for her online but was unable to find her. Knowing she had once been a heavy smoker, he assumed the worst.

“I always thought Diana had gone to New York to dance,” he says. “I looked for her in parades and in the Rockette line. I followed dance and theater, knowing this was her passion.”

In 2018, Diana, now divorced, took her adult daughter Brandy on a road trip to trace all the places she lived as a young girl. On their way through Tennessee, Diana says, “The beautiful mountains reminded me of West Virginia.”

She and Brandy planned another leg of the trip for May, 2019, to return to West Virginia, and to see if they could find Randy. Diana feared he may be a family man. Randy had feared she was dead.

In February, she found him on Facebook. She left a message for him to advise her where to stay in the May trip. Gradually, the communication resumed.

“When I heard his voice again, I was excited, and a flood of memories returned,” she recalls.

“When I saw Diana pull up in the parking lot,” Randy says, “I knew I loved her. I couldn’t look at her and reveal my true feelings over lunch.”

The three of them — Diana, Randy and Brandy — drove to the old neighborhood and toured the old stomping grounds. Randy and Diana retold the old stories for Brandy. The schools Diana had attended were long gone, but the ride was filled with laughter. They went to see Randy’s mother, and Brandy instantly adored her.

“We got in the car, and it was hysterical from the first minute!” she says. “We were in time with each other, finishing each other’s sentences, and we laughed! My daughter was like, ‘What on earth is going on?’ ”

On the last day of her visit, he kissed her in the hotel elevator. She laughs as she confesses, “My knees buckled and my heart pounded.”

Randy made plans to visit Salisbury in June for Diana’s birthday.

The long telephone conversations resumed. One night, he asked her to go outside and look at the same moon as they talked. As she walked outside, he flashed his headlights at her. He had come early for his June visit.

Diana traveled to West Virginia again and Randy proposed. She accepted. Randy moved to Salisbury within a month.

Diana’s many friends and acquaintances threatened Randy with bodily harm if he did not treat her well. They married in her back yard, surrounded by the roses she has planted and the friends she has developed over the years. Randy’s family came in from out of state.

Over the past year, the couple has settled in. Randy has found the people of Salisbury warm and caring. They share in the many cultural events Salisbury has to offer.

They say the same attributes that attracted them initially, are the same ones they love in each other today.

“We have 100% comfort and trust,” he says. “She has just grown into a wiser woman, you know, and she’s shown me a lot more of her talents. She impresses me.

Diana loved his voice back and West Virginia and still loves it. He reads to her – sometimes reading the Bible to her, and it makes her happy to hear him.

“After getting married, it was like we finally got to complete each other.”

They say after losing 50 years, they’re hoping for 25 years together.