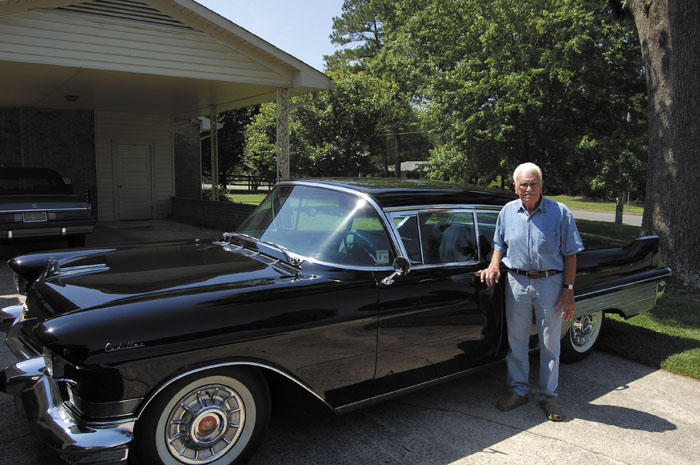 Emil Sparger stands next to his 1957 Cadillac outside his Spencer home. Photo by Mark Wineka, Salisbury Post

The story goes that he loved playing sports for the Spencer High Railroaders so much that when graduation day loomed in the spring of 1944, Sparger intentionally flunked a subject, so he’d have to come back to high school for another year.  He’d heard reports that Spencer would be restarting the football program that had been put on hold during the falls of 1942 and 1943 by World War II, and he desperately wanted to be part of it. Some of that tale may be legend and some of it may have been stretched over the years, but it’s a fact that he was back at Spencer for the 1944-45 school year.

His return would yield both rewards and consequences for the Railroaders.

Sparger was an exceptional three-sport athlete in high school. Baseball was his best sport.

For the 1944 Spencer baseball team, he was the starting catcher, but he also was used frequently as a relief pitcher. There was a 4-3, 12-inning win against Landis on April 14, 1944, during which Sparger caught the first nine innings and pitched the last three. He struck out two Landis hitters with the bases loaded and was carried off the field by his teammates. At least one scout was on hand to see that one. That probably led to his premature pro career.

By the end of Spencer’s 1944 season, Sparger was doing most of the pitching, No one lost any sleep over pitch counts, and if you started on the hill, you were expected to finish. Sparger threw 14 innings at Statesville and would have thrown more in a game that was mercifully halted by darkness with a tie score.

In his last baseball effort for Spencer at Eighth Street Ballpark, he threw a complete game to beat a strong China Grove squad.

Sparger was honored at Spencer’s athletic banquet, although a lot of the attention went to four of his teammates — William O’Brien, Bruce Simmerson, T.C .Neal Jr. and George Cruse. They had enlisted for military service and were off to join the war effort.

The late spring of 1944 is where things got complicated for Sparger. He signed a contract to play pro baseball for the Chicago Cubs organization. It was a contract that paid him only $100 per month, but Sparger probably would have played for free. Still only 17, but fearless, he headed to Erwin, Tenn., to play in the Class D Appalachian League.

Erwin’s park had been cut out of the side of a mountain. The left-field “wall” actually was part of that mountain. The lights were dim. The infield — Sparger was an infielder in pro ball — was hard clay. At the plate, Sparger went 10-for-50, an even .200.

He played later in the summer of 1944 for the Marion (Ohio) Diggers, another Class D team affiliated with the Cubs. He signed a contract with Marion in mid-July. He went 9-for-44 at the plate. The Diggers were pretty awful and had a 50-80 record. They did have a nice ball park. Lights were installed about the same time Sparger arrived.

When the school year started, Sparger was back at Spencer High.

Spencer did indeed make a football comeback in the fall of 1944, although it got a very late start (mid-October) and only a handful of games were scheduled. Two of those games were played just four days apart. E.R. Radke coached everything for Spencer. The Post cheerfully reported that “Radke pulled the train whistle for the first time in three years.”

Sparger might have turned in a sensational football season, but ankle and leg injuries caused problems. When he was healthy, his passes were Spencer’s primary weapon.

Spencer’s return to the gridiron — only two players had any organized football experience to speak of — started with a respectable 7-0 loss to Landis. Leonard Cross threw a touchdown pass to future Clemson baseball coach Bill Wilhelm to decide that one.

The China Grove game didn’t go nearly as well for Spencer. That was a 62-7 setback, with a long TD pass by Sparger providing the only good news for the Railroaders.

Sparger also tossed a 60-yard touchdown pass against Monroe, but injuries sidelined him for the game against James Gray High of Winston-Salem. The Railroaders lost 79-0 without him.

Sparger proved to be a terror for most of the 1945 basketball season.

Games were very low-scoring, so Sparger’s 13-point outing in a 39-17 romp over Woodleaf was considered quite an offensive outburst. Sparger’s strong suit was defense, and he held China Grove star Tommy Cooper to a single point as Spencer edged China Grove 20-18 to take over first place in the league. That was in late January. The Post’s Carl Spencer reported that Sparger was “one of the finest guards ever to trod the hardwood.”

In February, however, Sparger was ruled ineligible. His status as a minor league baseball player was reported to authorities by a rival school. When his pro contracts were entered as evidence, a committee of principals ruled that Spencer had to forfeit its roundball victories.

Sparger enlisted in the U.S. Navy not long after that. In the final months of World War II, he served in the “Seabees” — CBs is short for Construction Battalions. The Seabees built bases, airstrips, roads and bridges.

After the war, Sparger was stationed in California and kept in baseball shape by playing for high-powered service teams.

In 1947, he officially became a graduate of Spencer High.

In 1948, he was back on the baseball field at Newman Park, playing for the Salisbury Pirates in the Class D North Carolina State League.

He produced stellar games that season as a 21-year-old, his best days in pro ball. The stars of the team were Lefty Lisk and Hammerin’ Hal Harrigan. A switch hitter, Sparger batted fifth in the lineup, behind Lisk and Harrigan, and played shortstop every night. He batted .286 and was considered one of the league’s top glove men.

There was an interesting series with the Albemarle Rockets. On July 9, Joe Ferebee, who was a high school coach in Salisbury, homered and also pitched effectively to lead the Rockets to win against Salisbury. On July 10, Sparger came through with the game-winning hit in the bottom of the ninth as Salisbury ralled to beat the Rockets, 9-8.

Sparger had many three-hit games that summer. He had a four-hit game against Statesville in August.

A shoulder injury set him back some, and Sparger wasn’t as effective as a hitter in 1949. He played 23 games that season for the Uniontown (Pa.) Coal Barons in the Class C Middle Atlantic League. One of Sparger’s teammates with Uniontown was a 19-year-old pitcher named Chuck Churn. A decade later, Churn would become an unlikely hero for the Los Angeles Dodgers during the 1959 National League pennant race. Churn would pitch in the World Series  and would later manage the Salisbury Astros at Newman Park.

Sparger would wrap up the 1949 season with 51 games with the Salisbury Pirates. He hit .233 as a shortstop and third baseman.

There was a story published in the Post in late January, 1950, indicating that “Dutch” Sparger was running a service station in Spencer and playing basketball in a local league, but he would soon be heading out to spring training with the Waco (Texas) Pirates of the Class B Big State League.

He toiled for a while with Southern Railway, but most of his working years were spent at Duke Power’s Buck Steam Plant. He was a control operator. He went to work there in 1951 and retired in 1983.

In 1955, Sparger was elected as the president of the Spencer Athletic Association.

He became, in retirement, a collector of many things — bottles, radios, advertising signs, newspapers.

Jason Sparger, a grandson of Emil Sparger, starred for North Rowan before going on to play at Lenoir-Rhyne.

In the news recently was Sarah Margaret Dyer, captain of East Rowan’s tennis team and one of this year’s All-County Scholars. She is one of Emil Sparger’s nine great-grandchildren.