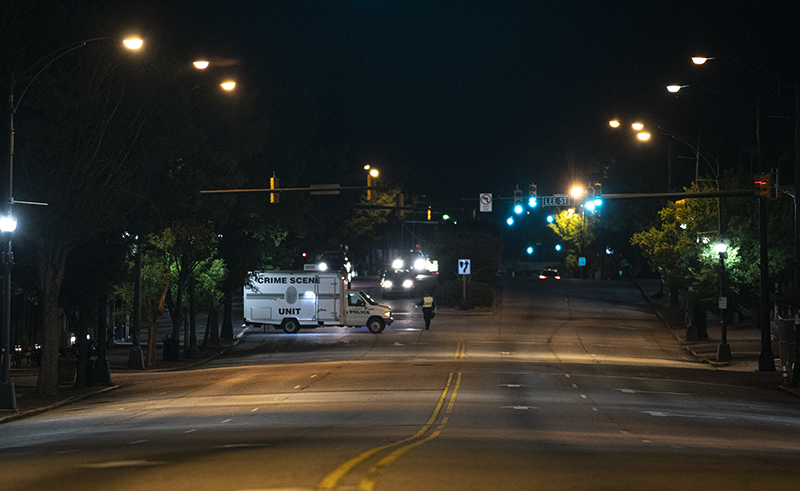 Josh Bergeron / Salisbury Post - A crime scene truck was used to block traffic at the intersection of Depot and Innes streets in downtown.

SALISBURY — When protestors lingered Saturday night after a “say their names” protest ended, police shut down streets for a brief period.

That shutdown led to the dispersal of protestors, who had chanted and shouted with homemade signs on the sidewalk and on the sides of the streets. Those protestors at one point walked down to the “Fame” Confederate statue and renewed chants of “Black Lives Matter and “No Justice, No Peace.” Some of those chants were directed at a group of men who lingered by the statue for most of the night while the initial and continued protest occurred.

Police shut down roads at the center of Salisbury around 9:50 p.m. They did so roughly two blocks in each direction, with police officers detouring traffic elsewhere. 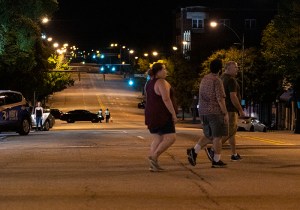 Josh Bergeron / Salisbury Post – Pedestrians on Saturday night walk through the middle of the intersection of Main and Innes streets. Police shut down the Square late Saturday as protesters lingered.

Salisbury Police Department spokesman Lt. Lee Walker said officers closed down streets “to maintain the safety and security of the protesters and those not involved.”

Unlike the initial event, which was conducted most via car and ended at 5:30 p.m., the protest later in the afternoon was mostly pedestrians. Cars continued to drive through the Square and blare their horns. Some participants lit off firecrackers on the sidewalk.

Both drew attention to recent killings of black Americans that have spawned protests across the nation.

Salisbury-Rowan NAACP President Gemale Black, who participated in the initial protest, returned as streets were shut down. Black told the Post that, while there were tense moments, he was still glad to see things remained peaceful.