SALISBURY — As horns from a hundred or more cars echoed through downtown Salisbury, Wanda Gaither had a message.

“All of us are God’s children, all of us,” Gaither said from the side of the Rowan County Courthouse. “We need to get ourselves together.”

It’s sad, she said, that some police officers, whose job is to protect and serve, are not living up to that duty.

“Yes, there are other killings going on, but they are supposed to protect us,” she said. “It seems like they don’t care and that they don’t get what they should. Look at how long it takes before the ones who are killing us get put in jail. It’s not right. It’s just not right. Racism is not right.”

Gaither was one of hundreds of people who gathered Saturday in downtown Salisbury for a protest in which participants drew attention to recent killings of black Americans that have drawn national attention. In particular, organizers of the protest, advocacy group Women for Community Justice, said they were focused on seeking justice for Ahmaud Arbery, a black man who was murdered in February in Brunswick, Georgia, after being followed while he was on a run; Breonna Taylor, a black woman shot and killed in March by Louisville, Kentucky, police officers during the service of a no-knock warrant; and George Floyd, a black man who died after a Minneapolis police officer pressed his knee on Floyd’s neck for several minutes during a call about counterfeit money. 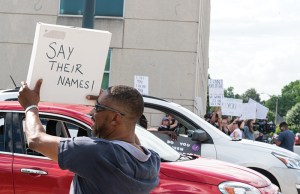 Josh Bergeron / Salisbury Post – Ruben Cowan stands on a sidewalk near the Rowan County Courthouse Saturday during a protest focused on recent killings of black Americans that have attracted national attention.

The protest began at the intersection of West Liberty and North Main streets and circled a few downtown blocks. Traffic backed up at The Square as more participants joined. Police officers helped direct traffic. While protesters mostly stayed in vehicles, some gathered near the Rowan County Courthouse and held up fists and homemade signs. Later in the afternoon, protesters stood at the corners of the Square and shouted.

Salisbury-Rowan NAACP President Gemale Black paced down Main Street with a sign reading: “A man was lynched today.” Black said he was glad the protest remained peaceful and was thankful that police officers helped direct traffic.

“I think this is amazing, and I think it’s just the beginning. We have to keep going, peacefully” Black said. “You see African Americans. You see whites out here. You see people of mixed race. So, it’s beautiful that we can come together as people and show that we want to stand for something, and we want to stand for justice.”

He said that change on the local level must focus on policies and ensuring that the voices of citizens must be heard.

“It begins with voting and then it ends with policy, and we can see the end result after that,” he said. 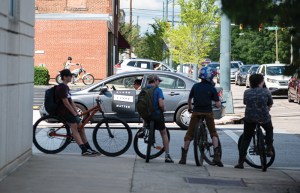 Josh Bergeron / Salisbury Post – A crew of kids riding their bikes through downtown on Saturday pauses to watch a protest conducted mostly via car.

That things remained peaceful in Salisbury even as a nearby protest in Charlotte had grown violent showed that the community here is stronger, Black said. Charlotte leaders on Saturday declared a state of emergency after protests stemming from Floyd’s death became violent.

“We really need to stress what it means to be one with the police force and the community so these types of accidents don’t happen here,” she said. “And people need to know the importance of also getting out to vote … If you’re not voting for new policies and change in your community, it’s not really helping.” 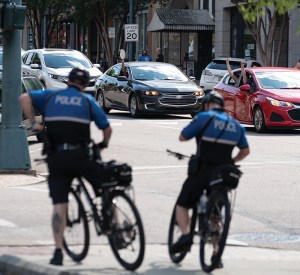 Anna Fisher, like many protest participants, held a homemade sign out of her car while she sat on the windowsill and held up a fist. Fisher said she was participating because black lives matter and that there won’t be justice “as long as my brothers and sisters continue to be killed.”

Fisher said that she hoped younger generations would produce needed change in society.

Alisha Byrd-Clark, who runs a mentorship program for at-risk young men and women in Salisbury, was streaming the protest live online from the sidewalk. Byrd-Clark told the Post the protest and the large number of people that turned out shows the boys and girls in her program that their lives matter.

As the afternoon turned into evening, the crowd of people participating in the vehicle protest dispersed and the group of people on the Square remained. That crowd chanted as cars honked their horns. At one point, the group paraded down to the “Fame” Confederate statue — where a small group of people with Confederate flags on their cars and clothes lingered — and continued chanting.

Female Athlete of the Year: East’s Harrison led the…