Female Athlete of the Year: East’s Harrison led the pack 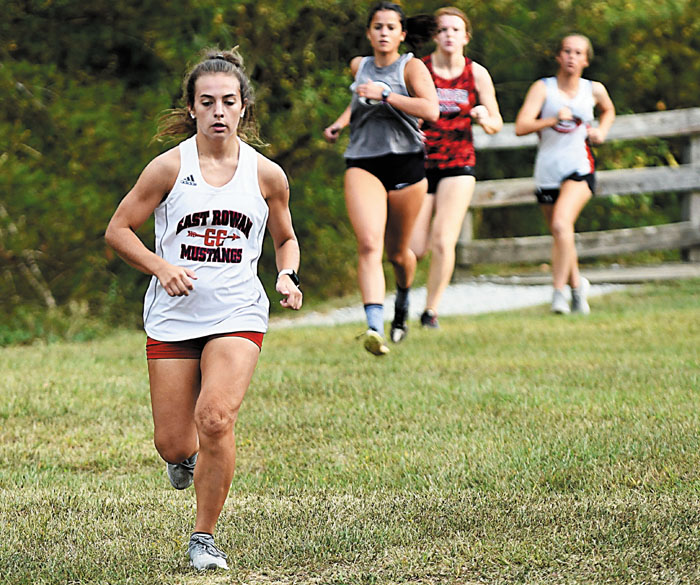 ROCKWELL —  She missed all of her sophomore cross country season with an ankle injury and tendinitis, but she was county champion in that sport as a senior.

She’s 5-foot-1 and was looking up to most of her opponents, but she didn’t let that stop her from scoring 1,050 points in basketball.

Recent East Rowan graduate Adalie Harrison has a different level of drive and dedication than most. That commitment to excellence has made her the Post’s choice for the Rowan County Female Athlete of the Year.

“That is one very determined young lady,” East girls cross country coach Cris Leckonby said. “Adalie is really easy to coach. She listens, she works, and she achieves goals. She perseveres through challenges.”

In a 2019-20 school year in which COVID-19 went undefeated, spring sports were a lost cause and didn’t factor into the athlete of the year decision. Ironically, spring sports were the arena where Harrison might have been most  amazing, as she was competing successfully in two. She won distance events in her two track and field meets before that season was halted. She had scored two goals for East soccer in a sport where she was making her high school debut.

Harrison did plenty in the fall as county cross country champ and Rowan County C0-Runner of the Year. In the winter months, she was one of the county’s top five basketball players as East’s leader and point guard. She was the engine on offense and defense as the Mustangs chugged steadily uphill from four wins her freshman season to 20 wins her senior year.

“She was our leader and our leading scorer for four years, so we always wanted the ball in her hands,” East head basketball coach Kevin Holland said. “In my opinion, she’s been the best point guard around for a couple of years. She gets overlooked some because of her size, but I have no doubt about her talent. She’s usually the quickest person on the floor and the best ball-handler on the floor.”

Harrison receives the Tracy Connor Award that has been sponsored by Jeff Chapman since 2015. The award is named for one of Rowan County’s all-time female athletes. Connor starred at South Rowan in the early 1990s and went on to become one of the finest basketball players in Wake Forest history. Connor scored 1,619 points in college. She had 42 double-doubles for the Deacons and led the team in scoring and rebounding in each of her four seasons. She was ACC Rookie of the Year, made the Freshman All-America team and was first team All-ACC as a senior.

“Being athlete of the year is an accomplishment,” Harrison said. “It’s an honor, something I worked really hard for. I had great coaches and I had great teammates who will be friends for life.”

Harrison is the first female winner from East since Maggie Rich in 2003.

In cross country, Harrison looked like she might be sensational when she was a freshman, but injuries started to take their toll and slowed her down. After missing her sophomore cross county season, she made a comeback and was able to finish third in the county as a junior.

She came into her senior season healthy and set the bar high.  East’s girls and boys cross country teams did everything together and helped motivate each other.

“Adalie had two big goals as a senior — win the county and qualify for states,” said Nermin Hodzic, East’s boys cross country coach. “She committed herself to that process, challenged herself in her training and pushed herself out of her comfort zone. She was a joy to coach, with all the dedicaton that you look for in a runner. Her work paid off. She won the county. She qualified for the state.”

Carson’s Conrad provided a competitive push for Harrison in just about every meet. Harrison encountered some midseason illness, but finished strong. She was 16th out of 150 in regional competition. She ran her fastest time of the season (20:39) in the 3A State Championships.

“She not only worked to make herself better, she made the others around her better,” Leckonby said. “She leads with her work ethic and she encourages her teammates. She’s just a great person to be around.”

Harrison had all the intangibles, as well as the things that could be clocked and counted. She was East Rowan’s female nominee for the JT Bost Sportsmanship Award, an award that honors qualities such as fairness, self-control, courage and persistence.

Even with the big finish she enjoyed in cross country, 10 years from now Harrison will be remembered mostly for basketball, for her role in the rise of the East program from rock bottom to contender. She was that Energizer Bunny who wouldn’t stop and wouldn’t give up during the bleakest times.

For the past week or so, Harrison has been on a graduation trip with her family to the Grand Teton Mountains in Wyoming, although she still got in her running every day, even in the Rockies.

“I was upset when track and soccer season ended so suddenly because I was really enjoying myself,” Harrison said. “But there still were a lot of good things that happened my senior year. We all got along, and when everyone gets along, it makes for some fun times.”

Harrison got a head-start in basketball because her sister, Hollie, played hoops and was three years older. Adalie got to join in the games with her sister and her friends.  By the time Hollie (now at Guilford College) was a senior and Adalie was a freshman, Adalie had caught up with her sister and was starting to move ahead with her ball-handling skills. It didn’t take Holland long to see that the kid sister’s energy and determination were off the charts. She was determined to be good.

Going into her junior season, Harrison had never won a game in January or February, but that’s the season East added Mary Spry and jumped to 14-13. Harrison averaged 11.0 points per game. She made first team all-county for the first time.

“She got there with a lot of work,” Holland said. “Every year, we built a little more trust.”

She scored her 1,000th career point on Valentine’s Day/ Senior Night, which was about as perfect as it gets. East fans had a love affair with Harrison for four years. The ultimate undersized underdog, she became the face of a program that made a rags-to-riches turnaround. Harrison and her fellow seniors put the foundation in place. Now the Mustangs have a chance to continue that success for years to come.

“Lots of memories from my senior season,” Harrison said. “The night we won at West Rowan. The night I got to 1,000. But mostly I’ll remember the bond with my teammates. We came a long way.”

Recruiting was frustrating, at times. Holland watched several area girls that Harrison had run circles around commit, but the only schools chasing Harrison were Division III schools that could only offer academic scholarships.

Harrison had made up her mind to choose William Peace College in Raleigh, when William Peace’s head coach Grahm Smith was announced as Lenoir-Rhyne’s new women’s head basketball coach during the first week of April.

“He’d been recruiting me for about a year to go to William Peace for cross country and basketball,” Harrison said. “But when he was hired at Lenoir-Rhyne, he asked me come there. It’s a great opportunity.”

It’s an opportunity for her to play Division II and to compete in the South Atlantic Conference. She’ll get a chance to play at the level where Holland felt she belonged all along — even at 5-foot-1 — and she’ll have a chance to pursue a career in nursing.

“Adalie is that total package,” Holland said. “Great student and great athlete. She’s worked at the Y and volunteered in the community. She must have figured out a way to squeeze more than 24 hours out of a day. I’d like to know her secret because she did it all and she did it all so well.”