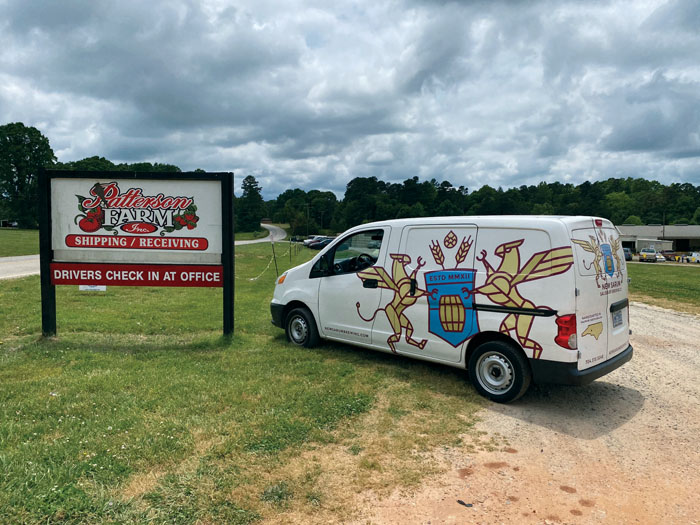 Courtesy of New Sarum Brewing — Each year, New Sarum partners with Patterson Farm to use strawberries for its Hazy Cakes brew.

SALISBURY — Throwing hundreds of pancakes and waffles into a vat of beer may not initially sound appetizing, but with a little experimenting the ingredients can eventually result in one of New Sarum Brewing Company’s many specialty beers.

As with any experiment, a scientific method is essential. Brewing beer is no different, said New Sarum co-owner and brewmaster Andy Maben.

“Beer is very much about science,” Maben said. “But also a big chunk of creativeness.”

Essentially, the “scientific method” used by New Sarum starts small with an idea coming to life, typically, with a 4-gallon test. Ideas are sparked among the staff, who “keep up with the hype,” staying mindful of trending foods, drinks and pop culture references.

For example, in April, one specialty beer was a hazy IPA with “Tigers Blood.” That included snow cone syrup, pineapple and mango. The inspiration behind the beer is the hit Netflix documentary “Tiger King.” Stamped on the crowlers were stickers with a quote from the central character, Joe Exotic, which said, “I’m never going to financially recover from this.”

Inspiration can also derive from movies and previous popular brews like the Bill-Murray-inspired “Seeing Shadows” beer. New Sarum on Friday released a spin-off version called “Watch Out For That First Step, It’s a DOOOZY.” The “Groundhog Day”-themed drink uses a portion of the Imperial Bill-Murray-inspired pastry stout and has been aged in bourbon barrels for four months.

The ingredients used in the brew are a result of brewery staff selecting a food item from the diner each time Murray visited the diner throughout the movie. This spin-off “broke the monotony of recent times,” said a Facebook post from New Sarum.

“We wouldn’t put something out there that wouldn’t be popular,” Maben said.

One popular brew that left many requests for more is the Cheerwine Lager, which is part of a continued partnership between New Sarum and the Cheerwine bottle and can redemption center in Salisbury.

While ales can be concocted in 14-18 days, lagers take up to six weeks, which makes releasing more Cheerwine beer difficult, as New Sarum isn’t “just getting Cheerwine syrup and adding it to the beer,” Maben said. This year, the amount of Cheerwine Lager was doubled to eight barrels, which amounted to about 250 gallons and 1,100 crowlers.

Additionally, because of the local partnership, he added that the brewery tries to highlight Cheerwine as much as possible.

“We have high standards of craft, and so do they,” he said.

Another popular specialty brew was the “Blue Flower Purple Sour Power” released back in August using the Japanese Butterfly Pea flower. The flower is a pH indicator, which changes the color of the beer from blue to purple when added.

Though conjuring up new ideas, brews can be challenging at times. And Maben said it’s harder to stay quiet for a month about the next release. In addition to making and branding the beer, the staff strategically plan each social media announcement of their next concoction.

One upcoming beer to be released is a Food Lion exclusive, called “Red, White and Blueberry.” The brew is a hazy milkshake IPA that’s “fruit-forward” with vanilla, blueberry and raspberry.

However, the pandemic and cancellation of big events has resulted in making smaller batches of specialty beer, such as the “Beer AF” brew. The triple dry-hopped American lager was set to be released for Pride Month, but now New Sarum plans to sell a limited supply of 27 cases. Sometimes making a bigger batch interferes with other beer ideas already on the docket and designed, he said.

And not all brews are a home run. Maben said some concoctions don’t make it to the tap wall. But some unsuccessful brews are later improved to release for a later date.

Additionally, as the pandemic has resulted in many businesses altering the way they operate, Maben said the pandemic has also forced them to be even more creative with their brews. Additionally, customers seem to be more excited due to the social isolation and restriction of other pastimes.

“(The pandemic) almost gave us a vehicle to be even more creative than we were before,” he said.