Problems for farmers, infrastructure with 2020 on track to be wettest on record 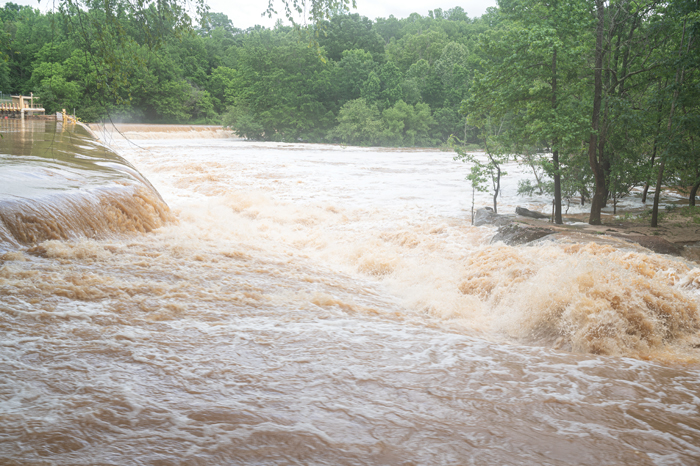 Josh Bergeron / Salisbury Post - Water flows at high speeds through the Riverpark at Cooleemee Falls, known as the Bullhole, Thursday after heavy rain on Wednesday night and into early Thursday.

SALISBURY — Though still early in the year, 2020 is on track for record-level precipitation, which has resulted in shorter seasons for farmers and impacts to local infrastructure.

National Weather Service meteorologist Joshua Palmer said the region has seen a “fairly wet pattern for almost two years now.” He cites persistent moisture from the Gulf of Mexico and Atlantic Ocean, which has resulted in locals becoming acclimated to wetness. As of Thursday, Palmer said NWS data show the Salisbury area has 31.4 inches of precipitation for the year, which amounts to almost 200% of the normal yearly precipitation.

Further, NWS data for the Greenville-Spartanburg, SC, office’s region indicate “normal” yearly precipitation is 17.2 inches. Accumulated precipitation for 2003 was the highest on record, but 2020 surpassed those levels from January to April.

Palmer said the period of wetness is not unusual, as it’s “a game of cycles.” He guaranteed “there will be drought again,” particularly sooner than later since the area has been in a wet period for a couple years now. His prediction was based on accumulated data as far back as 1954, though he said meteorologists can never be certain because they’re only able to forecast a week to 10 days in advance.

“There’s really no such thing as normal,” Palmer said. “You can never let your guard down when it comes to the weather.”

While rain is essential for crops, too much can result in an overall loss of production for farmers, said Amy-Lynn Albertson, who serves as the director of the Rowan County Extension Service. Farming is always a risk, she said, and excessive rainfall can set back planting dates and limit the overall harvest.

The wet year has been “detrimental to strawberry growers,” Albertson said. As a result, what was once anticipated to be a great season for strawberries is expected to end a couple weeks early due to the rainfall.

Rain causes fruit to rot, Albertson said, and it can lead to other diseases for crops. Additionally, as fruit can’t be picked in the rain, discarded fruit can’t be sold to the community, she said. This results in some farmers ending the season early, as the cost of cleaning up the field outweighs profits from the berries.

Strawberries aren’t the only crop impacted by rainfall. Albertson said the rain causes a problem for tomato growers as well as soybean and corn growers. She said they’re unable to get in the field and plant the crops.

“It’s never easy for farmers,” Palmer said, adding that at least a couple weeks of dryness would be needed to calm local streams down and restore soil moistures to some level or normal.

Palmer also said local communities have to re-evaluate their accommodations for wet weather, particularly with the infrastructure. Additional flooding can result if stormwater systems can’t adapt to the increased wetness.

The town cited the overflow to an estimated 3 inches of rainfall within a 24-hour period.

Albertson does cite “some wiggle room” for larger crops like corn and wheat, as those can be harvested when it’s not raining.

And, fortunately, some crops like berries and tomatoes allow for growth under high tunnels, which are described as “greenhouses without heat,” Albertson said. The tunnels allow farmers to control the water intake, but it’s not a system that works well for larger crops.

“Along with everything else going on in the world, the weather plays a factor, too,” she said. “There can always be too much of a good thing.”