SALISBURY – Lynn Moody participated in a webinar with national education leaders on Thursday. 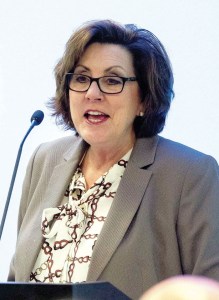 Stoddart spoke at the beginning of the summit by describing her disillusionment with education based on testing that did not center around the learner and how Design39 showed her how much she could learn exploring her creativity and interests through projects that gave her creative freedom, and allowed her to express her interest in Harry Potter.

Moody noted Stoddart’s comment about how fun learning can be. Moody also examined how RSS is the only school in North Carolina given “renewal” freedoms that allow flexibility with curriculum, spending, hiring and other items normally associated with charter schools instead of a public district.

“We believe that students are not test scores,” Moody said, adding the district wants to being out what is best in children.

Wagner has held a number of positions, including the previous expert-in-residence at Harvard Innovation Lab. Wagner said educators are suddenly free of a curriculum that’s totally preoccupied with standardized testing. Educators need to respond to children who are currently in crisis, he said.

He described his own experience dropping out of high school in 1964, saying school did not make sense to him or help him make sense of the world around him with events like the assassination of John F. Kennedy, the Cuban Missile Crisis and violence against civil rights activists.

Rashad described his heart as being heavy after the recent killings of Ahmaud Arbery in Georgia and George Floyd in Minneapolis.

Rashad said every learner comes from a certain context, and he used to think education was only about creativity and innovation. He said educators should be careful about market-driven influences trying to commodify education and described the country as more segregated today than it has been since the 1960s, noting poor white people in Appalachia along with minority communities who are disproportionately affected by poverty.

Rashad described the need to develop a public capable of living together and caring for each other.

Moody said the entire country sees how inequitable education is. RSS became 1:1 — issuing devices to all students in the district — so they could all have access to the same digital learning material.

The district had to adapt to providing for as many schools as possible while facilities were closed due to the pandemic, changing assignments so they did not exhaust entire families who were all at home together and working through difficulties with internet service at homes where the only available connection was a mobile hotspot provided by the district or open wifi available in the community.

Wagner described the pandemic as an opportunity for educators to declare their own values and aspirations.

“Now that the tests are gone by, they’re 20th century relics, what do we believe we should be held accountable for?” Wagner said.

Funding for an ongoing study into renewal by North Carolina State’s Friday Institute for Educational Innovation and was put on hold after its funding was held up after a state budget was not passed last year, and the district is in the process of developing its own internal accountability model.