SALISBURY — A woman who refused to leave a Salisbury home was charged with drug possession after she was found with crystal methamphetamine hidden underneath her clothing. 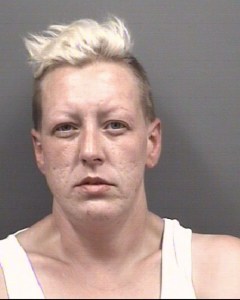 The Rowan County Sheriff’s Office charged Emily Ann Lambert, 37, whose address is listed as the streets of Salisbury, with felony possession of a controlled substance schedule II and second-degree trespassing.

The property owner called authorities because he said Lambert had previously been asked to leave. In that incident, a deputy told Lambert in September if she returned to the home she would be arrested, according to Rowan County Sheriff’s Capt. John Sifford.

When a deputy arrived at the home Tuesday, Lambert was still at the home located in the 700 block of Joe Lentz Road. She was arrested and searched. The deputy found a silver container hidden in her bra. The container held a plastic bag of a crystal-like substance that field-tested for methamphetamine, Sifford said.

She was issued a $2,500 secured bond. It’s not clear what the connection between Lambert and the homeowner, Sifford said.

• A woman reported on Tuesday she was the victim of an assault while in the 1300 block of Julian Road.

• Christopher Scott Jacobs, 28, was charged on Tuesday with misdemeanor assault on a female in the 2800 block of Agner Road.

• Ashley Lynn Poole, 32, was charged on Tuesday with misdemeanor simple assault while in the 2800 block of Agner Road.

• Monica Kaye Taylor, 35, was charged on Tuesday with assault with a deadly weapon while in the 1300 block of Julian Road.

• Amber Marie Miller, 32, was charged on Tuesday with misdemeanor simple assault while in the 1300 block of Julian Road.

• A man reported on Wednesday someone stole items from his building located in the 200 block of South Shaver Street.