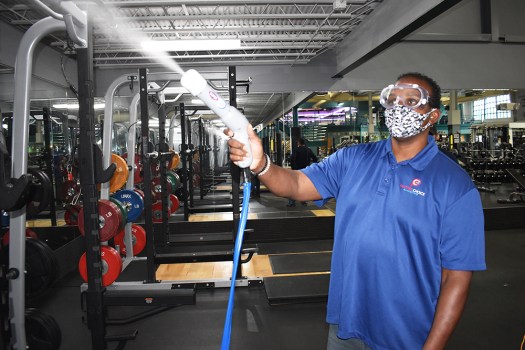 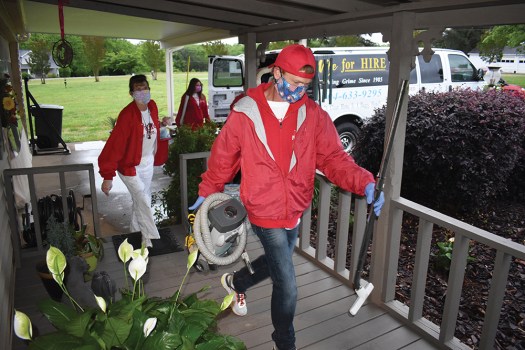 Roy Moose and Shirley McPearson, with Wife For Hire, head into a home to clean. 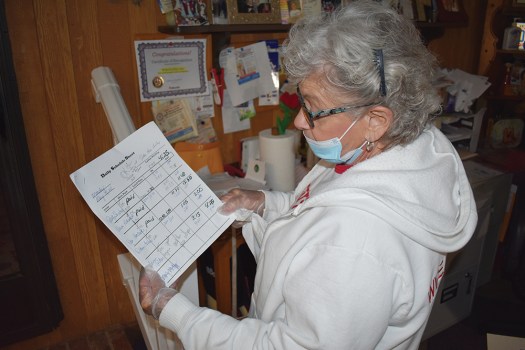 Sheila Cannon, the owner of Wife For Hire, looks at her schedule for the homes her staff will clean that day.

SALISBURY — The COVID-19 pandemic has slowed down Sheila Cannon, the owner of Wife For Hire.

On March 20, Cannon had to put her 35-year-old cleaning business on hold due to outbreak. She called her customers telling them they would be shutting down for two weeks, and then the COVID-19 outbreak worsened and she extended it. On May 11, after talking to her staff, Wife For Hire started back.

“I wouldn’t want any of my people to take in something to somebody else,” she said. “We shut down and we were shut down for seven weeks.”

Cannon said, even if they reopened, she knew they could always back out if they weren’t ready.

Wife For Hire is a home-cleaning service. Some of Cannon’s customers have been relying on her service for more than 30 years.

Meanwhile, Shawn Blackwell and Jason Rollins started Premier Choice Misting in October. At first, it was to help businesses during the flu outbreak. Their business uses Clorox 360 and sprays down surfaces in offices, daycare centers, schools and nursing homes as preventative maintenance. Months later, COVID-19 concerns flooded the community and more businesses flocked to their misting service.

“It was the perfect storm for us,” Blackwell said. “Typically for businesses it takes three years to be profitable, but we right now have a waiting list for people to get our services. As they start opening up more, as the governor starts allowing more businesses to open, we’ll be doing more gymnasiums, schools, more places that people previously weren’t allowed to go.”

Premier Choice Misting is based in Rowan County but has spread across the state and into South Carolina. Blackwell said a national corporation has reached out to them about providing their services. Blackwell said the company is ready to grow, but their focus remains in the community.

“Right now, we have a loyalty to Rowan County and a loyalty to North Carolina,” Blackwell said. “Before we worry about the other, we want to protect our backyard first. Once we get them protected we’ll look outside of those borders.”

As the waiting list grows, Blackwell said they don’t want to put anyone on the back burner, but they have a priority level with essential businesses.

One is a trucking company that delivers food to grocery stores. Another is nursing homes where the residents can’t leave.

Business is picking back up for Wife For Hire. The staff generally works about a 35-hour week, but they were clocking in at 47 hours during their first week back.Cannon said she has customers that are older that cannot clean and, since the operations halted, cleaning at their homes has halted as well. The staff is spending an extra one to three hours in homes.

“Things have changed a lot with the virus,” Cannon said. “It has slowed us down. It’s made us more aware of the customer and their feelings, because we do care about them.”

She said some of her customers were not quite ready to resume their cleaning service, which she understood.

They are also taking more precautions. The staff of six wears masks and gloves at all times. They stay to their assigned cleaning rooms. They are also cleaning more thoroughly.

“We’re spraying extra and we’re doing extra in homes, so that everybody is healthy and going to OK,” Cannon said.

She has concentrated on her customers’ feelings about safety.

“They’re opening up their house for us and saying ‘come on in, we feel safe with you,’” she said.

“Now we’re really conscious, because I, from an owner’s standpoint, have to protect my staff,” Blackwell said.

He is also looking out for his customers that may have been impacted financially by the COVID-19 outbreak but still require cleaning. He is working with them individually with a payment system, which is “what you’re supposed to do.”