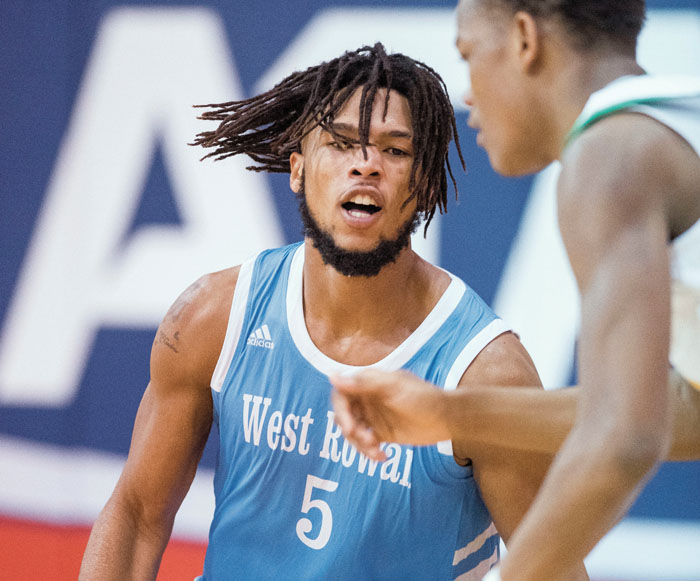 If everyone played as hard as McCombs did, coaches could save a lot of their fiery pregame and halftime speeches. He was a self-starter, a self-motivator.

Added Nixon, “Chaz always practiced like it was the fourth quarter on a Friday night.”

There was no spring sports season to speak of, so the Rowan County Male Athlete of the Award for the 2019-20 school year was based on the fall and winter seasons. The 6-foot-5, 210-pound McCombs offered the county’s best combination as far as football and basketball prowess. Many rated him a a top five guy in the county in both sports. He not only brought size and talent to fields and gyms, he brought charisma, leadership and physicality.

McCombs will receive the Darrell Misenheimer Award. The award is sponsored by Jeff Chapman and is given in honor of Misenheimer, who died at 57 in 2014. Misenheimer was one of the greatest high school athletes in Rowan history as an East Rowan Mustang — a starter for North Carolina’s football team in the 1974 Shrine Bowl, a two-time WNCHSAA champion in the shot put, and a runner-up for WNCHSAA wrestling honors.

“It’s a huge honor,” McCombs said. “It means a lot because I’ve never won an award anything like this before.”

McCombs had an interesting high school history. He played varsity as a North Rowan freshman. He played at the 4A level at West Forsyth the next two seasons. He returned to Rowan County to play for West Rowan as a senior and made a huge impact on two successful teams. West football was 9-5 and reached the third round of the 3A state playoffs. West basketball went 15-10 and won the North Piedmont Conference Tournament.

“I think I overcame a lot of tough situations,” McCombs said. “I tried to step up as a teammate at West. A lot of guys looked up to me, so I tried to be a leader.”

On the football field, McCombs was a game-changer because he had the size to be a run-stopper and the speed to get after quarterbacks. In the Concord game, he had two sacks and a forced fumble.

“Just an ultra competitor with a non-stop motor,” Nixon said. “He had this way about him that made his teammates play harder. They tried to match the effort he was playing with. His competitive spirit brought a lot to the team and to West Rowan. He embodies the effort and spirit you want all your players to have.”

Coronavirus was tough for seniors with next-level athletic aspirations. Coaches didn’t get to make their usual calls on the West campus. Players didn’t get to take their normal visits.

McCombs will play football for Palmetto Prep Academy in South Carolina. It will be growth year that  McCombs will spend between high school and college. Palmetto competes against other prep schools, such as Fork Union, and against college jayvee programs. Palmetto generally has a host of players who move on to four-year schools after that prep year. The top signees from Palmetto this year headeed to Illinois and Virginia Tech, but most moved on to smaller schools.

While McCombs’ future is in football — 6-foot-5 stands out a lot more in football than basketball — hoops is the sport that owns his heart.

“I really do like football, but I’ve got love for basketball,” McCombs said.

McCombs averaged 13.4 points and 7.2 rebounds for the Falcons.

“It was kind of like having a 10-year NBA veteran added to your team,” Gurley said. “He gave us that sense of toughness that we’ve been trying to get back to. With Chaz and with Zeek Biggers (6-6, 330), we could kind of play Michigan State ball, physical ball. Chaz bought into Coach Gurley. He bought into Coach (Dadrian) Cuthbertson. He bought into his teammates and he bought into the Columbia blue. You went into every game knowing you were going to get a lot of production from him.”

There were some interesting discussions, some of them during the game, between Gurley and McCombs and between Cuthbertson and McCombs.

Gurley remembers praising Biggers for a post move, as Biggers headed back on defense. McCombs immediately threw up his hands and asked, ‘What about that post move I made?'”

“Chaz is a really charming guy,” Gurley said with a laugh. “He likes to get your attention and he wants your praise, but he always lets you coach him, and once he knows you love him, he’ll not only run through that brick wall for you, he’ll get the rest of his teammates to run through that wall right behind him. Occasionally, Chaz would decide he wanted to be Magic Johnson, but we needed him to be Horace Grant, Charles Oakley, Ben Wallace. We needed him to be that consummate power forward.”

McCombs, who is working at Kentucky Fried Chicken before he heads to Palmetto, said he enjoyed West’s coaches and his teammates.

He was really good in the NPC games and picked up his scoring pace. He averaged 16.1 points in West’s last 14 games. He scored 23 against Carson, 21 against North Iredell and 20 against Statesville on the night the Falcons upset the Greyhounds in the NPC tourney final.

“Coach Gurley worked us hard, pushed us to the max, and I think we proved to a lot of doubters that we were better than they ever thought we could be,” McCombs said. “I played with good guards who set me up to score.”

Gurley and McCombs don’t live far apart, so there were times Gurley drove him home from practice. He talked to McCombs a lot, got to know him as well as any of his players, even though he only got to coach him one year.

“I can’t say enough good things about Chaz,” Gurley said. “The highest praise I can give him is that he would always do the hard stuff and he would do it with passion. I hope that what he left behind, as far as his toughness, is something that will stay with us.”