SALISBURY – Livingstone College has been awarded a $500,000 grant to preserve its historic Monroe Street School property.

The award, announced and administered by the National Park Service, is part of $14 million in African American Civil Rights Historic Preservation Fund grants that will finance 51 projects across 20 states and the District of Columbia to preserve sites and history related to the African-American struggle for equality in the 20th Century.

It is currently named the S.E. Duncan Education Center, in honor of the fifth president of Livingstone College, Dr. Samuel Edward Duncan. In 2003, the property met the historic designation for both education and ethnic heritage and was designated an historical site by the U.S. Department of Interior National Park Service.

The building, last used as the West End Head Start Center and Livingstone’s Education Department, has been vacant for about 15 years due to unabated asbestos. Dr. Carolyn Duncan, Livingstone College director of grants, student scholarships and special projects, said the grant will be used to stabilize deterioration, preserve the structure and repurpose the building, including securing an engineer’s assessment and an architect’s design; repairing the roof, windows and doors; removing trash and debris inside and out; and abating environmental concerns.

“Preserving the Monroe Street School is the next logical step for this historic property,” Livingstone President Jimmy Jenkins said. “The significance of the history of the building, the architectural design, and the physical location in the West End community is a visual reminder of the history and the progress of the city in race relations and the cultural significance of the African-American contributions to the city.”

RALEIGH – Faith Native Garrison Seitz was elected to his second term as Student Body Treasurer at North Carolina State University, representing approximately 37,000 students at the university, N.C. State Board of Trustees, and UNC Board of Governors. 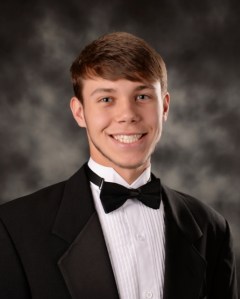 Business officially began for the 100th session of the university’s student government association on April 8.

As treasurer, Seitz leads all financial processes within Student Government, and oversees and facilitates the dispersal of approximately $400,000. In the 99th session, he led the overhaul and restructure of the Treasury to be more accessible and efficient for students. He serves on the Senate Finance and Tuition and Fees Committees, and leads the Appropriations Council.

Since starting his term, Seitz has worked to support students impacted by changes caused by COVID-19. He has helped release a statement offering support to students, helped release the #ThinkAndDoATHOME campaign to keep the campus connected, co-hosted a virtual Student Government Town Hall, and is collecting feedback to understand the concerns and struggles students are facing in light of COVID-19.

Throughout his tenure in Student Government, Seitz has served as a student senator representing the College of Engineering, and was the treasurer for the 99th Session. He is a rising junior studying civil engineering.

Since 2016, Crosby Scholars Rowan has hosted an annual Senior Gala to celebrate its graduates and announce students’ post-secondary plans. Like many events this spring, the Crosby Gala was canceled due to COVID-19. However, the staff came up with other ways to honor graduates

“One of the special aspects of the annual Senior Gala is having the honor of revealing the names of our scholarship recipients,” Crosby Scholars Executive Director Jessica Vess said.

Local donors and community partners have provided more than $16,000 in scholarships that were to be announced this year to Crosby Scholars seniors.

Staff, board members and scholarship donors participated in a three-day scholarship parade across Rowan County to surprise students at their homes with the news . From Cleveland to Spencer, and Salisbury to China Grove, a caravan of vehicles decorated in Crosby Scholars car magnets traveled 150 miles to award 25 scholarships to students from seven county high schools.

The 2020 Crosby Scholars scholarship recipients are:

In honor of the award, each student may choose one book for purchase by Gardner-Webb’s Dover Memorial Library. The book will be inscribed with the student’s name and the date of the award presentation.

Celsea Reeder, of Salisbury, was presented the Stefka Eddins Undergraduate Research Award. This honor recognizes a student in Natural Sciences for demonstrating a commitment to and excellence in undergraduate research by execution and completion of a collaborative student-faculty project.

Leah Jancic, of Cleveland, received two awards. She was presented the Professor James Rash Award for exhibiting outstanding creativity, productivity, craftsmanship and presentation in the areas of ceramics or sculpture.

The award is given in honor of Professor James Rash who taught ceramics, art appreciation, drawing and painting for Gardner-Webb from 1965-1980. Jancic was also awarded the Art History Research Award, a monetary award presented to the student whose research results in a well-written paper that clearly presents an original idea in the field of art history.

Congratulations to the following local high school students for winning the 2019-20 Key Club Core Values Scholarship sponsored by The Kiwanis Club of Salisbury:

Kiwanis Club of Salisbury awards each recipient a $1000.00 scholarship to apply toward college expenses in honor of their dedication to the values of leadership, character building, caring, and inclusiveness.  These are the core values of Key Club organizations as established by Kiwanis International.  The scholarships are awarded based on academic excellence, service to others, and participation in Key Club.