‘What Faith is known for’: COVID-19 means no Fourth of July celebration 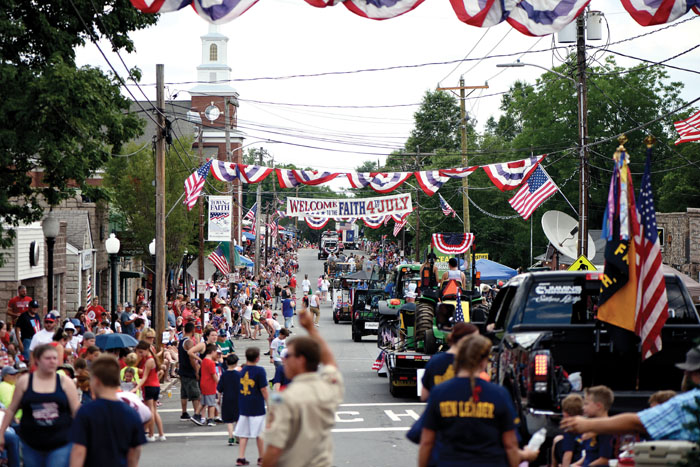 JON C. LAKEY / SALISBURY POST The Annual parade was held on Main Street in Faith for the The Faith Fourth Celebration on Wednesday. Wednesday, July 4, 2018, in Faith, N.C.

FAITH — The words of the late Eugene McCombs seem wiser than ever today.

McCombs had a history of public service that began in his hometown — on the Faith town board and as mayor. His political service continued until he reached Raleigh and joined the N.C. House of Representatives in 1993, where he continued serving until his death in January 2004.

His public service also included being treasurer for the Faith Fourth of July celebration. And, as Randall Barger tells it, McCombs was a regular advocate for event organizers maintaining a rainy day fund. In the event of a bad year for the Faith Fourth of July or a cancellation, the money could be used by the four civic clubs who put on the event to continue their regular projects.

“I always thought, ‘We’ve had rain, but we’ve never been rained out completely,'” said Barger, a town alderman and member of the celebration’s organizing committee.

Eva Millsaps, the chairwoman of this year’s celebration, recalls watching past celebrations in the rain.

“There have been many years where it’s rained every day and it’s still gone on,” Millsaps said. “When you live in a community like Faith, it’s just what you do on the Fourth of July.”

But COVID-19 is a rainy day the 2020 Faith Fourth of July celebration couldn’t overcome. And prudent planning means the four civic clubs in town who organize the annual celebration and use its proceeds — the Faith American Legion, American Legion Auxillary, Civitan Club and Jaycees — will have some reserves to fall back on for their regular community projects.

“To have a rainy day fund, that was a wise thing that he said,” Barger said.

The Faith Fourth of July celebration committee late Monday called off this year’s event because of COVID-19 and the statewide restrictions that accompany it. There were logistical challenges that included getting an OK from an insurance company, having enough volunteers turn out and getting rides inspected. Barger said the insurance company specifically wanted a letter from Gov. Roy Cooper saying that the Faith Fourth of July could proceed. The letter never came.

And there are other restrictions, including crowd size limits, that compound other challenges.

The last break in the celebration, which attracts a crowd many times the size of the small town’s population, is thought to have occurred during World War II, according to Barger and Faith resident Tim Williams. Since 1946, it has been a staple for Faith and Rowan County.

“Here, it’s like you have two Christmases, and the second one is to celebrate the birth of a nation,” Williams said. “It’s a wonderful feeling when you get up and the town is all decorated.”

Organizers in Monday’s announcement encouraged people to continue to show their patriotism by decorating their homes.

During its history, the celebration has attracted locals and presidents alike. The Faith Fourth of July celebration was originally sanctioned by town government in 1920, but gatherings initially were sporadic because of wars and economic distress, the event’s website states.

Murphy Corl grew up in Rockwell, works for the Granite Quarry-Faith Police Department and was eating lunch at the Faith Soda Shop with other law enforcement officers on Tuesday. Corl said it was hard to think about the fact that revelers wouldn’t be lining the streets of the small town on July 4.

“Honestly, it’s hard to believe. It’s what’s Faith is really known for — all the community events,” he said. “It’s really hard to process that it’s not going to be this year. Growing up in Rockwell, in 30 years, I’ve never known it not to happen.”

The cancellation means there will be no parade, food, music, fireworks or any of the usual items that accompany the celebration. The stage will be silent when Faith Idol participants might otherwise serenade a crowds of hundreds. There won’t be an excuse for folks who have moved elsewhere to return home and reunite with friends they haven’t seen since the last Fourth of July or longer, Millsaps said.

‘Little bump in the road’

The cancellation also means the disappearance of one a good time for business for local institutions like the Faith Soda Shop and Yosties. Owners of both businesses, however, said they understand the committee’s decision to cancel Fourth of July festivities.

“I sort of expected it with everything going on, but I hate it,” said Andrew Welch, who owns the Soda Shop with his wife Toni. “It’s always great to have all the people here on parade morning and, you know, it’s just America. That’s what you’re accustomed to. It’s sure going to be different.”

Welch described the cancellation as “a little bump in the road for us” after the business has weathered state-mandated shutdowns for dine-in service. He was most concerned about how civic clubs would be able to continue with their yearly work.

Festival organizers who spoke to the Post all said they were disappointed about the cancellation and none were certain whether a smaller celebration of some sort might be possible.

Phase 2 of the state’s reopening runs though “at least Friday, June 26,” the governor’s office said in a news release last week. Mass gathering limits in the phase two of “reopening” don’t allow more than 10 people indoors or 25 people outdoors.

Barger said he was pessimistic that gathering restrictions would allow for a celebration of some type in Faith by July 4. But he said there will likely be a flag-raising event and small dedication for a 144-brick wall to which local people have contributed. That gathering will be for the Fourth of July committee and, possibly, for those who purchased the bricks.

“Let’s just hope with this thing they find a way to cure it or fight it in someway,” he said.

Barger, Millsaps, other organizers and business owners said they are looking forward to the return of the Faith Fourth of July celebration in 2020, the 75th anniversary.

“Hopefully for our 75th next year, we’re really going to be able to do some super duper stuff,” Millsaps said.