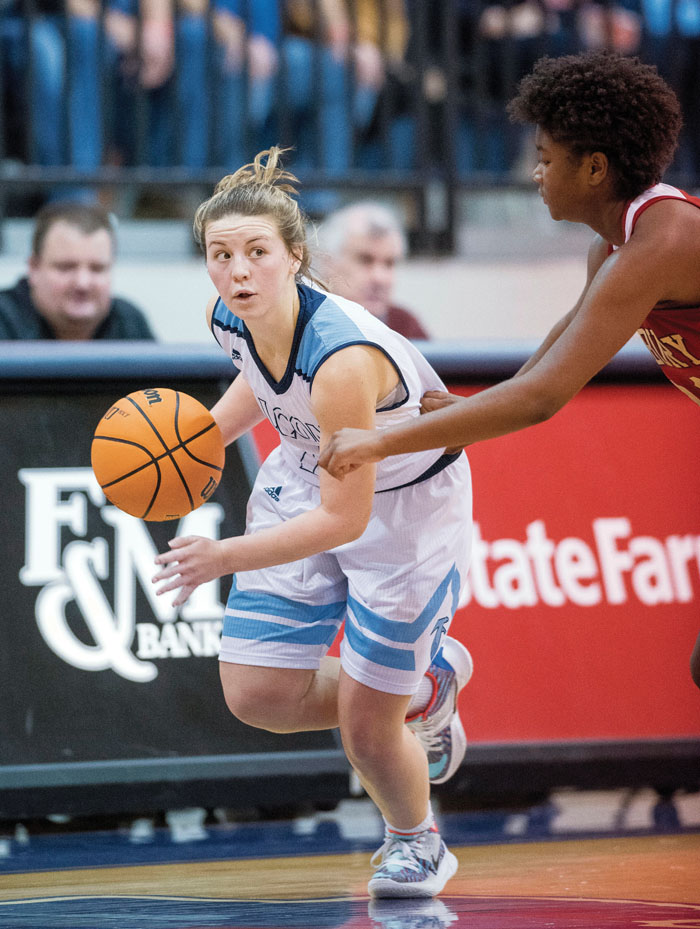 SALISBURY —  Coaching your own children at the high school level is never an easy assignment.

For the kid, who is being coached, it might be an even tougher job.

Is coach yelling too much or is coach not yelling enough? It’s hard for coach to treat his or her kid exactly like everyone else because coach is eating breakfast and supper with them. Maybe coach is driving them to school. In the case of female coaches, coach gave birth to them.

West Rowan’s Taylor Poole and her mother, West girls basketball coach Ashley Poole, not only survived the experience, they grew from it, and they won a championship together during Taylor’s senior season.

They’ll look back on it all with a lot more pluses than minuses.

“When you’re being coached by your mother, it’s different, it means watching film every weekend,” Taylor said. “You can never leave the game behind. The bad games linger longer. When bad things happen, they tend to just stay with you. But, at the same time, when something really good happens, it means even more. When something good happens, it’s wonderful.”

Taylor will play at Guilford College next season. That’s wonderful. That’s something both Pooles can celebrate.

A class that had won a middle school championship moved up from West Rowan Middle to West Rowan High for the 2016-17 school year. Taylor was on the varsity team as a freshman.

Taylor’s senior season was her best. She averaged 9.7 points and 4.7 assists, scored in double figures 14 times and was the No. 2 scorer for a 20-6 team. She was All-North Piedmont Conference and second team All-Rowan County.

“I did feel like it was my best year in a lot of ways,” Taylor said. “As far as handling pressure and making shots under pressure, it was my best year. We’d lost Mary Sobataka and we didn’t have her to lean on, so I had to do some of the things Mary had been doing for us. My mom told me the team was counting on me, and I tried my best. I was a better teammate as a senior and I communicated better with my teammates. I got more assists, but you don’t have to make a great pass to Abigail Wilson (who made All-State) to get an assist. All you have to do is make a decent one. She catches everything.”

As was the case with all of the Falcons, some of Taylor’s best senior moments came in the Dale’s Sporting Goods Sam Moir Christmas Classic — making passes to tournament MVP Wilson, playing hard-nosed defense, making prudent decisions.

West couldn’t have had a much tougher path to the Moir tournament championship. The Falcons had to beat a Salisbury team that went 29-2 in the semifinals and a Carson team that went 25-4 in the final. Poole hit huge 3-pointers and clutch free throws in both of those marquee games, to go along with a 14-point outing in the first round of the tournament. She made the all-tournament team.

“That Christmas tournament championship was the best of times, and we were able to share it not only with my mother, but with Abigail’s mother (Wendy) who was fighting cancer,” Taylor said. “Those games were emotional and they’ll always mean so much to all of us. What people may not remember is we won those tournament games with defense. We worked so hard on our defense. We all came a long way.”

West held Salisbury to 46 points and Carson to 49. Both teams scored nine fewer than their season average.

Coach Poole appreciated the effort by her team and by her daughter at Goodman Gym.

“Taylor put in the time to make herself a better defender and that was a key to our success all year,” Coach Poole said. “I was really proud of the steps she took to be a better player and a better leader as a senior. She let the game come to her more. She had more confidence in her shooting, and if the shots weren’t falling, she had the experience to look for teammates instead of forcing things.”

A factor in Poole’s step forward was sharper conditioning. She credited K.P. Parks, the former West Rowan running back, who does personal training out of the Defenders Sports Academy in Cleveland.

“I think K.P. is really the reason that I’m getting a chance to play in college,” Taylor said. “He changed a lot as far as my speed, my agility, my strength and my fitness. He pushes you. He told me he wanted me to run a 300-yard sprint the other day, and I did it. That’s not something I would’ve been able to do before. No way.”

Taylor has known for a while that she wanted to play college basketball. She didn’t have any idea where.

She went to a Guilford camp and was surprised to get a call not long after that from Guilford’s long-time head coach Stephanie Flamini, who coached several Rowan County players who enjoyed outstanding careers at Guilford. East Rowan’s Tracey Croner (1,021 points for the Quakers) and North Rowan’s Courtney Hill (1,071 points) were actually bigger stars at Guilford than they were in high school.

“After Coach called, she stayed in touch with me through the season,” Taylor said. “I’ll be a point guard in Guilford, so I’ve got to keep working hard on my ball-handling, my defense and my conditioning.”

Taylor finished her West career with 739 points. That’s not bad at all. She played with 1,000 point scorers Egypt Alexander and Sobataka and for four years with 2,000-point scorer Wilson, so it’s not like she was ever looked to for major offensive numbers. Her job was to get the ball where it needed to go and to make outside shots when teams packed their defense around Wilson.

“My senior year was a really rewarding year,” Taylor said. “We won 20. We had a good team.”

Taylor plans to major in exercise science, but she hasn’t ruled out becoming a teacher and coach. That’s a decent endorsement for the job her mother did with her.

“It’s tough to be the coach’s kid, just really hard, at times,” Coach Poole said. “There’s never any down time from the game, and Taylor knows just how frustrating and challenging it all can be. But I wouldn’t trade one second of it. I wouldn’t trade a second of the time I had on the court with her.”