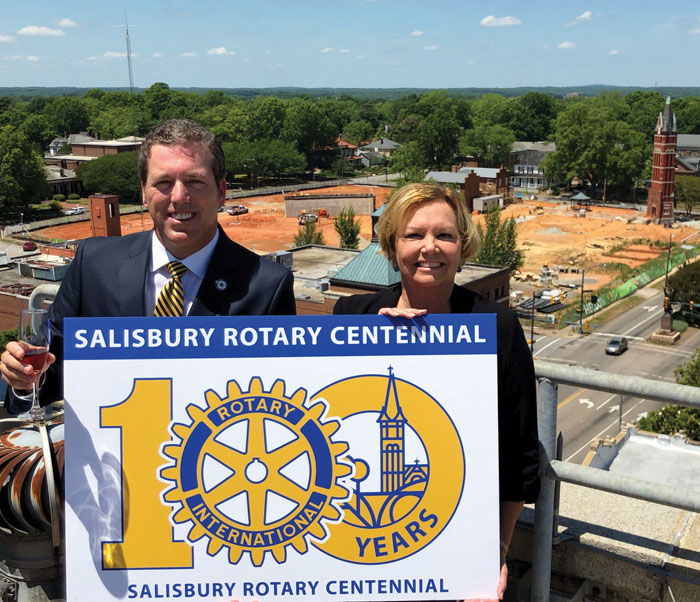 SALISBURY —  The Rotary Club of Salisbury celebrated its 100th anniversary with a small, socially distanced gathering of 10 Rotary board members on the roof of the Plaza building in Downtown Salisbury on Friday, May 15. While the club would have loved to have shared the moment with its more than 120 members, a small group gathered for a celebratory toast and a quick photograph overlooking the Bell Tower Green Park. The rooftop was the very site where the club was chartered 100 years earlier. Club President Steve Fisher led the members in a sparkling Cheerwine toast to “a century of community service, civic leadership and business ethics.”

The 120-member Rotary Club of Salisbury was scheduled to celebrate this momentous occasion with a black-tie gala at The Country Club of Salisbury earlier this month. The celebration has been postponed until the fall due to COVID-19 restrictions. The club has re-established its weekly meeting schedule using virtual technology and is in the process of developing a plan for future “in-person” meetings that meet the safety standards of our COVID-19 environment.

Fisher reminded the group that “The Rotary Club of Salisbury has a proud history in our community and has helped lead the city through a World War, the Great Depression, the Great Recession and many other challenges … now we will add global pandemic to the list and as Rotarians, we will rise up to help our fellow citizens navigate this unprecedented moment in history.”

History of the Rotary Club of Salisbury

The Rotary Club of Salisbury was officially chartered and installed at a ceremony on the roof of the Wallace Building (now the Plaza) on May 15, 1920, in part as a response to the pressing needs for support of education in Salisbury. Charter members included Stahle Linn, president; Leo Wallace Sr., vice president; J.M. McCorkle, treasurer and Pete Wallenborn, secretary.

In its first year, the Rotary Club of Salisbury was instrumental in a successful $500,000 bond issue for construction of Boyden High School (what is now Salisbury High School). The club also sponsored a cattle show designed to educate farmers in Rowan County about the value of raising livestock that headlined for many years the Rotary effort in rural affairs.

In 1925, Rotarians lent their support to the $150,000 endowment to have Catawba College relocated to Salisbury. In 1927, the Salisbury Rotary began a no-interest student loan program to encourage college education. In 1929, a very long tradition was begun that is continued today with the initiation of the Junior Rotarian program to recognize outstanding seniors at what is now Salisbury High School. In 1946, Rotary established a fellowship providing as much as $2,600 for study abroad. The Rotary Club continued to operate through the dark days of the Depression having started such projects as a Boy Scout and YMCA Camp (James Hurley Jr. was instrumental), a boy’s club set up in a Rouzer warehouse on East Council Street and a Sea Scout program in cooperation with Alcoa on High Rock Lake. The Lexington and Thomasville clubs participated in this last project that involved, among other things, the work of Tom and Fred Stanback Sr. digging a well and erecting a well house. In 1948, then-President Charles Heilig provided the leadership for the establishment of the camp for boys on a farm near Mirror Lake.

In 1936, the club bulletin, Rotary Ramblings, was initiated through the efforts of people like Bob Smoot, Paul Reynolds, Wendell Detty, Grover Palmer and Sonny Epting.

The Rotary Club of Salisbury contributed significantly through the efforts of Charles Taylor Sr. among others in raising $600,000 to build the YMCA on North Fulton Street and received a commendation from the YMCA Board of Directors for its ongoing support in annual fund drives to support the Y. Also in the ’60s, Rotary was heavily involved in sponsoring swim meets including an AAU event that Richard Reamer Sr., Odell Sapp, Whit Cannon, Dr. Smith Kirk and Sonny Carpenter worked to make happen.

The Rotary Club of Salisbury was instrumental in establishing the China Grove, Lexington, Concord, Mocksville and the Rowan Rotary clubs.

In 1969, a program was begun that continues to this day to honor public servants. The club honors members of the Salisbury Police and Fire departments, the Rowan County Sheriff’s Office, Rowan County Emergency Services and the N.C. Highway Patrol annually with a special Rotary program.

In 1971, the club initiated an annual barbecue sale at the club to raise money for worthy causes including college scholarships for Rowan County youth. Under Jim Whitton, through a vote of the club, the Rotary Club of Salisbury established that its focus for the future would be youth advancement and education. This focus would be implemented by establishing the Rotary Scholarship Trust Fund Inc. In the late 1980s and ’90s, the Rotary Club of Salisbury deliberately sought to recruit younger, more diverse (gender and race) members and to substantially expand the resources of the Scholarship Trust Fund. During this time, the fund has granted 400 scholarships for more than half a million dollars.

In the first decade of the new millennium, the Rotary Club of Salisbury has taken on new work. In recognition of its centennial, Rotary International challenged local Rotary clubs with raising funds for a project that would recognize Rotary in their local community. This effort included the Patriots Flag and Memorial Concourse at the City Park in collaboration with the City of Salisbury.

In 2012, the club began participating in the Seminar for Tomorrow’s Leaders, a program of the local district (7680), which is facilitated by the Center for Creative Leadership in Greensboro. The seminar, a four-day program ending on a Sunday, is held at Catawba College and involves rising juniors and seniors at Salisbury High School. Most recently, the club started the Happy Feet Program, providing new shoes to school-age children throughout the community at the beginning of each school year.

In honor of the Rotary Club’s 100-year celebration, the club has committed $100,000 to the Bell Tower Green Park in downtown Salisbury — a signature gift for a signature project in our community.