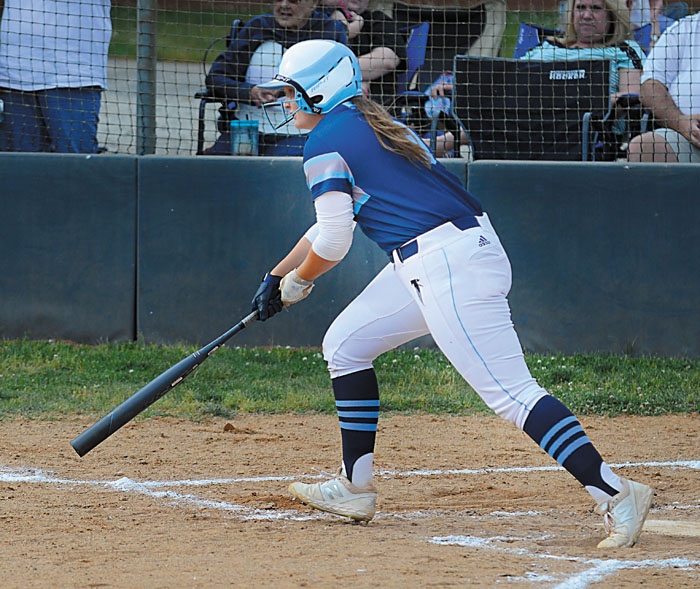 SALISBURY — One of the worst days of West Rowan graduate Reagan Haggas’ life may wind up changing things for the better.

There was an emotional party for her on Friday at her home. It was graduation day for West’s seniors. On top of that, there was a “signing day” for Haggas with Guilford College’s softball program.

After living 20 years in Huntersville, the Haggas family moved here two years ago . They were welcomed to by West Rowan coaches such as Jimmy Greene, Elizabeth Clarke and Ashley Poole.

Life in the Haggas family revolves around sports. Dad Josh, who starred as a shortstop for Virginia Tech baseball, was a draft pick by the New York Mets and played third base for two seasons in the minor leagues. He coaches high-powered travel softball teams. Reagan’s younger sister, Riley, is one of the county’s future stars in the sport. A West Rowan Middle School student, Riley was one of the key bats for the Rowan Little League team that won the 2019 World Series.

“Riley is going to be something,” her proud sister said. “She’s a rising eighth grader, but she looks like a rising 12th-grader and plays like it.”

The Haggas family was in South Carolina for a tournament last July 13 when a near tragedy occurred. The girls and their mom, Mitzi, had gone to a service station between games. Returning to the field, their vehicle was struck in the rear by a car going about 50 miles an hour.

Riley suffered multiple cuts from broken glass and needed stitching up, but she was in the front seat. Reagan was a passsenger in the back seat and got the worst of the impact.

“I remember crawling from the back seat to the front to get out the door,” Reagan said. “I was able to get out of the car. But then I realized I couldn’t walk.”

There was an ambulance trip to the hospital, but a lot of what happened after that is a blur for Reagan.

Josh Haggas remembers it vividly, however. He will never forget seeing his daughter face down on the black top, unable to move her legs. The issues turned out to be mostly shock and nerve damage.

The use of her legs returned with the help of a neurosurgeon, but there was a lot of physical therapy and rehab in front of her before she returned to a softball field. She was determined to play her senior year for West Rowan.

Extreme Performance helped Reagan get started on the road back. Last October, she started working with K.P. Parks, the former West Rowan (and University of Virginia) football phenom who does personal training at Defenders Sports Academy in Cleveland.

Reagan’s rehab picked up steam under Parks’ direction. The idea of just getting back to normal was replaced by a more ambitious goal— getting better.  Getting stronger, getting fitter, getting faster.

“K.P. was great,” Reagan said. “He helped me get back to working out, and then working out harder than ever.”

Added Josh Haggas, “K.P. changed Reagan physically and mentally. She has another gear now that she didn’t have before. She’s always loved softball, but  she never wanted to play past high school. After working with K.P., she found  herself desiring to play in college.”

Reagan liked the Guilford campus and filled out the application and paperwork. Guilford coaches knew her from camps she’d attended and were excited about getting her. So she’ll get to get her chance with the Division III Quakers, probably as a first baseman. She verbally committed in late March.

Reagan also played basketball and tennis for West, but softball is her thing.

She made her debut for West softball as a junior in the spring of 2019 and batted .341 with three homers and 24 RBIs for a 22-4 team. Haggas was the catcher early that season while Megyn Spicer was injured. Haggas also plays first base and third base.

“When we didn’t have a catcher early in the season, Reagan caught, and she saved us,” West coach Jimmy Greene said. “She came to a new program, made swing adjustments and did everything we asked her to do. She committed to the West Rowan softball program just like she was one of the girls who grew up here. She’s got a good personality for the game, kind of laid-back, but also kind of driven. She wants to win.”

Haggas was set to be West’s third baseman as a senior. She launched a home run in the 2020 opener. But coronavirus ended the season after just three games.

“I’ll never forget Reagan hanging around the field after that last game (against West Stanly), not wanting to go home,” Greene said. “Maybe she knew in her mind that we wouldn’t be able to play again. She can really hit. It stinks that she didn’t get to have a senior season. There’s no doubt in my mind she was going to be all-conference and all-county.”

At least she’s got college softball to look forward to now. Science is her favorite academic area, but she’s not sure about her major yet.

“I’m excited about continuing with softball,” Reagan said. “Maybe the car wreck was a blessing in disguise.”