High school football: Kraft gets the nod at West 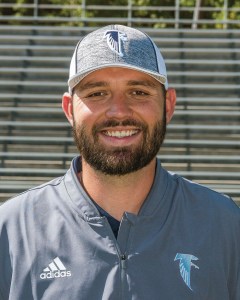 “The phone rang all day long,” Kraft said. “It was surreal. Very exciting. A lot of people have invested in me over the years and were genuinely happy for me. There was a tremendous outpouring of support from the community.”

In a perfect world, Kraft, who turned 26 on May 11 and was playing tight end and first base for West during the 2011-12 school year, would’ve gotten a lot  more reps as an apprentice coach and maybe some time on the defensive side of the ball, but the Falcons needed to name a new leader after head coach Joe Nixon (and quarterbacks coach B.J. Sherrill) departed for Mooresville.

Staying in-house was the best option available. Kraft knows the players, knows the coaches, knows the school, knows the community and knows what West Rowan football is all about. He’s lived it. He’s breathed it. He understands it.

Coronavirus has created uncertainty. No one really knows right now if high school football can even be played this fall, or next spring, or whenever. But the Falcons had to have a plan in place for whatever comes next. West principal Jamie Durant has known Kraft since he was a middle school student. He has confidence in him.

There is an “interim” tag attached to Kraft’s title. He understands why.  He’s aware that he’s young, that’s he’s relatively inexperienced, and that he’s never been a head coach, much less head coach of the program that has usually set the standard for Rowan County football since the late Scott Young was hired more than two decades ago. West’s last losing football season was in 1998, Young’s first year. West has lost just three games against Rowan County opponents in the last 19 seasons.

“I get that, I do,” Kraft said. “This is a program that Coach Young got rolling a long time ago, and Joe Nixon kept it rolling. It was an honor to have those men as mentors, and it’s an honor to follow them. It’s big that West Rowan’s administration believes in me and I’ve got no problem with the interim tag. My plan is to earn the title of head coach and to prove I deserve that title. I plan to be at West a long time.”

Louis Edward Kraft III worked for DuPont, a chemical company, in Delaware. He coached his son, Louis Edward Kraft IV, in baseball, and Louis Edward Kraft IV, who is known to all as Skip, was good enough at the sport that he came south to play for Catawba College. Skip met his wife, Lisa, at Catawba where she was the Catawba Indian mascot. Their three children — Elizabeth, Julia and Louis V —  graduated from West Rowan and went on to college. Solid kids. One nurse. Two educators.

Skip served as West’s head baseball coach from 1992-99 and enjoyed 100 wins. The fifth Louis Edward Kraft was born in the spring of 1994.

“I guess my options are very limited as far as naming my future son,” Kraft said with a grin.

Kraft played basketball and baseball in his high school days at West, but it was football that captivated him. He was in Mount Ulla at the optimal time and received three state championship rings.

“Freshman year, I got called up to the varsity for the playoffs,” Kraft said. “In the 2008 state championship game, I was out there for the last play when we were in victory formation.”

He was a tight end. His first varsity catch came as a sophomore when West still had K.P. Parks and Chris Smith. His first touchdown catches came as a junior when the Falcons were led by cousins B.J. Sherrill and Domonique Noble. Both of those steamroller teams went 16-0.

“One man can’t make a band, but Coach Young did a great job as far as building a staff, we had a lot of talent, and we had a lot of support from administration and the community,” Kraft said. “A great culture was in place. We were always prepared. We were so good that some games were almost boring. We knew we were going to win. The only thing in doubt was the final score.”

Kraft’s senior football season in the fall of 2011 was more challenging. The famous guys were gone, by then, but the Falcons, who had some flaws, still willed themselves back to another state title game and finished as 3A runner-up. Kraft had two TD catches as a senior.

Kraft went to (UNC) Charlotte as a regular student, but a student with an unusual passion and head for football.

“I had a pretty humbling start with Charlotte’s program,” Kraft said. “I was the guy filming practice, just part of the video crew. But the program had only been started a few years earlier. They didn’t have a lot of guys willing to help out. I started working my way up.”

He knew one of Charlotte’s coaches. He’d met linebackers coach Napoleon Sykes when Sykes was on the staff at the Naval Academy and was recruiting Kraft’s West Rowan teammate, Brantley Horton. That relationship helped move Kraft closer to the inner coaching circle. Jeff Mullen, who was the offensive coordinator for the 49ers, shared his knowledge with Kraft. His son, Nate, had played for Hickory Ridge against West Rowan. Brad Lambert, who was Charlotte’s head coach, took a liking to Kraft.

By his sophomore year, Kraft was sitting in on offensive meetings. By his junior year, he was signalling in plays from the sideline.

“I was given some more responsiblity my senior year,” Kraft said. “Then I got the opportunity to be a grad assistant and I worked with receivers and running backs  for two years while getting started on my masters,” Kraft said. “I gained valuable experience. There were a lot of great people at Charlotte.”

Kraft loved the college game and might have made it his future, but his father, who had retired from the school system after finishing his career as Southeast Middle School’s principal, experienced health issues.

“The college game is phenomenal, just so intense and pressure-packed because you’re coaching every game for your job,” Kraft said. “I wasn’t sure I was making the right decision when I left Charlotte for high school coaching, but I wanted to get back closer to my dad and wanted to spend more time with him. That’s what brought me back to West Rowan.”

Things frequently happen for a reason.

He’s been working with running backs and tight ends while he was on Nixon’s staff the last two seasons.

“We had good teams,” Kraft said. “This past season, you look up, and we’re back in the third round. We won nine and could’ve won a few more.”

It rained Thursday. Kraft was headed out to the West field to turn off the sprinklers when Durant called him in for the chat that led to him being named interim head coach.

On Friday, graduation day, Kraft communicated with many of the team’s parents and most of the 27 returning players. West graduated 22 seniors, including four starting offensive linemen, tackling matchine Baiden Suddarth and big play man Jalen Houston.

Returners include defensive lineman Zeek Biggers, a towering Georgia Tech commit, and Noah Loeblein, who was the starting quarterback as a sophomore and made a lot of strides during the 2019 season.

“Good teams are coach-led, but great teams are player-led,” Kraft said. “I’ve told Zeek and I’ve told Noah that it’s going to be their show. We’ve got three good returning backs and two capable tight ends, but we’ve only got one receive  back. So you’re likely to see us in sets with two tight ends. Two tight ends give you mismatches. They create gaps for the running game.”

Kraft hopes to make his head-coaching debut this fall, but with football on the coronavirus “high risk” list, according to national guidelines, there’s a chance the season could be flipped with baseball, which is “medium risk.” Fall baseball and spring football? It’s possible.

“Well, we’ve had a chance the last two months to see what life without sports is like, and nobody likes it,” Kraft said. “Football is made for those fall Friday nights, so I really hope we can play football this fall. But if we can’t, if we’ve got baseball instead, we’ll support Coach (Seth) Graham and the Falcons. That would be preferable to no sports, at all. But a question I have is that if you do flip football to the spring, when do you flip back? Are you really going to play football in the spring of 2021 and again in the fall of 2021? That would be tough for kids to do. Football is a brutal sport. Bodies need recovery time.”

That falls into the realm of things you can’t control.

“I’ll be sending workouts to our players, but there’s really not that much we can do,” Kraft said. “It’s a holding pattern for everyone.”

Kraft’s father has a clean bill of health now and was back in the dugout for the Falcons as a baseball assistant when the 2020 season abruptly ended.

Louis V said his parents are the two most fired-up people in the world over his new job. He plans to make them proud.

There’s a reasonable chance he will. Age is just a number. Scott Young was 27 years old and a Davie assistant when West principal Henry Kluttz took a chance on him and changed Rowan County football history forever. Young was 172-54 in 17 seasons in Mount Ulla, with nine conference titles, three state titles and a 46-game winning streak.

“I’m the first to admit I don’t know everything there is to know,” Kraft said. “But I plan to keep learning every day.”