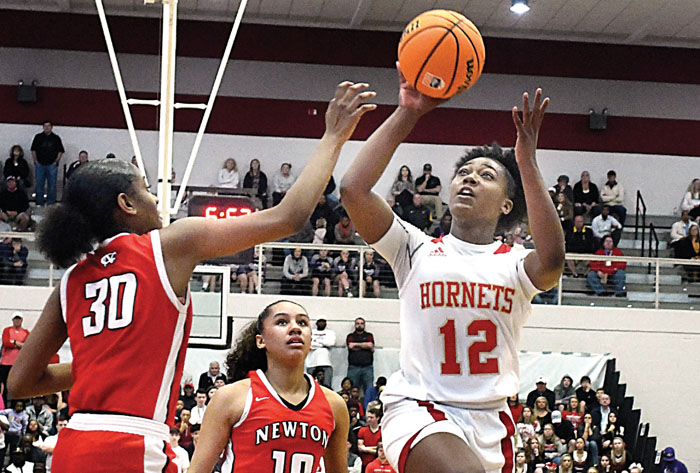 SALISBURY — Salisbury guard Anayia Fulson will continue her basketball career at Spartanburg Methodist College, after being a key component of a serious surge for the Hornets’ girls program.

Fulson wore a lot of hats for the Hornets. She was a scorer, a ball-handler, a passer, a defender and a leader. She set a good example. She was good in the locker room. She gets along with people and was good for team chemistry.

Fulson completed her career as Salisbury’s No. 6 all-time scorer with 1,381 points, finishing 17 behind her mother, Sheree Gillespie, who is No. 5 on that list. Gillespie graduated from Salisbury in 2000 and went on to play at Livingstone College.

Fulson recorded her 1,000th point on opening night of the 2019-20 season with a three-point play against Thomasville.

“Anayia was a culture-changer for the program,” said Lakai Brice, who directed the Hornets to a 29-2 season. “Every season, we asked her to change roles. What we needed from her as a senior was being our leader on and off the court, and she was great in that role. She saved her best for last. It was an honor to coach her.”

“My senior season meant the most because it was my best season,” said Fulson, a first-team all-county pick who averaged 12.6 points, 4.6 rebounds, 4.1 assists and 2.1 steals. “We had a very young team, and I was so proud of all of them. We played hard all the time.”

The defining moments for Fulson came on Feb. 21,  when one of the basketball games of the year unexpectedly broken out in the Lexington gym, where Salisbury was taking on the Oak Grove Grizzlies in the CCC tourney championship game.

No one saw it coming. Playing at home, Salisbury had routed Oak Grove three weeks earlier by 26 points, but Oak Grove had turned the corner and had become a hot team. Salisbury had anticipated taking on Ledford or North Davidson for the championship, but seventh-seeded Oak Grove eliminated both of them during the tournament.

Oak Grove shot almost 50 percent against the Hornets and probably should’ve won, but on a night when her young teammates were playing young, senior Anayia Fulson refused to let the Hornets lose. For all of Salisbury’s success in recent years, Fulson, had never celebrated a conference tournament championship. This was her last chance. She wasn’t going to let this one get away.

Fulson made Salisbury’s last bucket of regulation. The game went to overtime.

With Salisbury trailing in the first overtime, Fulson scored the equalizing bucket.

Then Fulson made a steal and layup for her 17th and 18th points to give Salisbury a two-point lead in the second overtime. The score was tied at 43-all with 1:45 remaining in that second OT when Fulson fouled out. But even with five fouls, she was productive.

“There was a stretch in that game where every time we needed a stop or needed a score Anayia provided it,” Brice said. “Then she fouls out, but I can remember her coming to the sideline, shaking her head and telling her teammates, ‘It’s OK. Y’all got this.’ She showed maturity, she showed leadership, she showed growth. That moment made me smile from ear to ear.”

Fulson was right. Her teammates had it. Shortly after Fulson had to sit down, freshman Kyla Bryant made her first 3-pointer of the night to put the Hornets ahead to stay. Rachel McCullough made the free throws that sealed the championship.

That night against Oak Grove is when Brice knew the Hornets were going to make a playoff run — and they made a great one. With three freshmen and two sophomores joining Fulson in the top six, the Hornets won four 2A playoff games. They stretched their winning streak to 21 games, before losing to Newton-Conover and AP state player of the year Chyna Cornwell in the regional final.

The 5-foot-8 Fulson is a solid offensive player, a decent 3-point shooter and strong, acrobatic driver, but she’s a scorer who doesn’t rest on the defensive end. Often, she accepted the challenge of guarding the opponent’s top player.

She found her next home when she made the 115-mile trip down to Spartanburg Methodist.

“I went down there to work out for them, and I just really liked the coach and the school,” Fulson said.

The head coach is Heather Macy, who was an assistant at Catawba for Brice’s senior year with the Indians. After several stops as an assistant, Macy got her first head-coaching job at Pfeiffer, moved on to Francis Marion, and was successful at East Carolina from 2010-18. She was 134-117  in Greenville and is the all-time wins leader for the ECU women’s program.

Macy was hired by Spartanburg Methodist in July, 2019. Her first team went 21-8 and won the region championship. It’s a two-year program, so the plan will be for Fulson to move on to a four-year school in 2022.

“Coach Macy will help Anayia grow and develop,” Brice said. “She has the potential to be a really great college player.”

Fulson has speed and was competing on Salisbury’s track and field team when that season was shut down. In the Hornets’ only meet, she won the 200 meters and placed fourth in the 100.

“I didn’t want to lay around, so I went out for the track team,” Fulson said. “I’ve still been working out, staying in shape.”

“I’d like to come back after college and be able to give something back to the game,” Fulson said. “I want to stay around sports.”

Fulson gave plenty to the Hornets, who won three regular-season CCC championships, plus a Christmas tournament and a CCC tournament during her tenure.

“And we’re one step from the state championship game this year and 29-2,” Brice said. “Words can’t describe the ride Anayia took us on this year.”