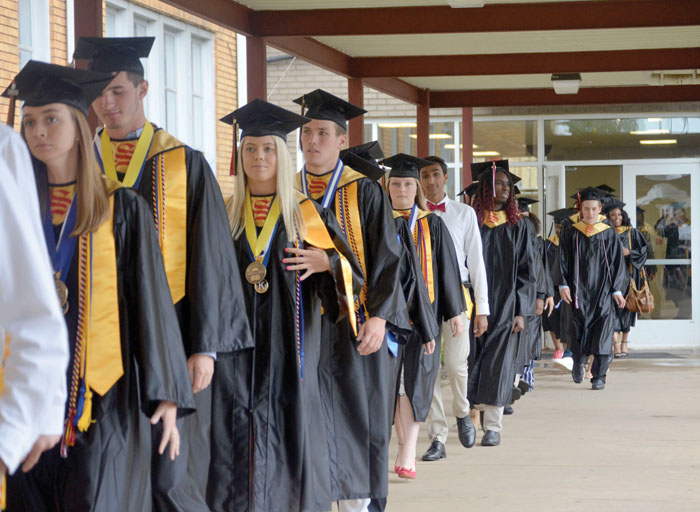 Students begin filing out of the school to head to the gym for the 2019 Salisbury High School graduation ceremony where over 200 students walked across the stage. Shavonne Walker/Salisbury Post

Community members have done their best to honor Rowan-Salisbury high school seniors amid uncertainty about graduation during a global pandemic. There have been drive-by celebrations and gestures by local businesses, too. At the Food Lion on Jake Alexander Boulevard, workers who were high school seniors got to walk across the front of the store in their caps and gowns.

But the end of the school year last week and the date scheduled to be graduation, Friday, marked graduates’ entry into the same uncertain world as the rest of the community without any of the fanfare that normally comes with it. Even as the Rowan-Salisbury School System has promised an in-person ceremony at some point, graduates are leaving high school without any idea about when that might be despite the fact that other districts have already unveiled plans or, in the case of A.L. Brown in Kannapolis, already finished the ceremony.

A.L. Brown High School seniors Friday and Saturday came through the auditorium over the course of two days while being spaced 75 seconds apart. The school handed out masks and filmed the graduation to be broadcast later.

Cabarrus County Schools announced their plans more than a month in advance. On June 12 and 13, the school system will have a two-day period of graduations at Charlotte Motor Speedway.

It’s now Rowan-Salisbury Schools’ turn to make plans for its seniors and announce them. The school system did the right thing by promising to hold an in-person ceremony, but it needs to provide some reassurance it will not break that promise.

It will only become harder to hold a ceremony as the calendar moves closer to 2021. Graduates will move away. Others won’t be interested in coming back. Some could get jobs that won’t allow for time off.

Graduates across Rowan County understand that this year’s ceremony won’t be business as usual. They won’t be filling Keppel Auditorium with family members. They won’t gather in large groups at football stadiums, wishing it wasn’t so hot outside, or gymnasiums, praying for speakers to wrap things up. Depending on the type of graduation, students may have to take added precautions, including wearing masks. Family members may not be able to attend.

Even if the school system has not picked a specific time, it must make more details clear about how it plans to honor the class of 2020. We think there are ways to simultaneously plan a meaningful ceremony without jeopardizing the health of staff and/or family members.

If Rowan-Salisbury Schools staff want the school board’s approval, a special called meeting is scheduled Thursday at which it could add discussion to the agenda. If staff have not made plans, they should prioritize those conversations.