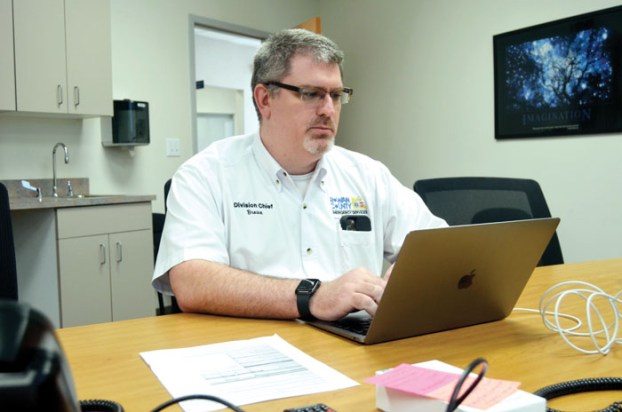 Behind the scenes of Rowan County’s COVID-19 Data Hub

SALISBURY — Since the beginning of the COVID-19 pandemic, the Rowan County Health Department has released some details about the virus, but its efforts to provide local information have expanded of late into what it calls “the data hub.”

The processing leading to the public presentation of data is one that involves nurses, data verification, the county’s information technology department, brand cohesiveness and news releases.

On March 27, the county unveiled a map that allowed users to see confirmed cases in Rowan County by zip codes. Throughout the event, the amount of information has grown to include demographic data on each person who tests positive.

Each morning, nurses collect data that has been loaded to the North Carolina Electronic Disease Surveillance System. The system is used by the North Carolina Department of Health and Human Services, Division of Public Health, the state’s 86 local and multi-county district health departments and eight HIV/STD regional offices. Laboratories also report electronically to the electronic disease surveillance system.

In some cases, state data is different because not all of the information is collected. Some is unknown. Often, officials said, the person is listed in the county that received the lab results, which may not actually be Rowan County.

Nurses verify if the COVID-19 case is, in fact, for a resident of Rowan County. If the patient is not living in Rowan County, then nurses place the data within the correct location.

Health department nurses then make a confirmation phone call to patients who tested positive. And nurses investigate each case beyond data contained in the state system to determine the patient’s name, age, current status and other pertinent information. Early in the data collection, tests results were delayed because of a backup with state processing. Some patients recovered before results were returned. But there is currently a quicker turn around for test results.

One case this week listed two COVID-19-positive patients who were living in Texas as residing in Rowan County because that’s what the pair said was their permanent address. But the two people have lived and worked in Texas for the last two months. And those two cases were removed from the Rowan County COVID-19 count, Brown said.

The patients contracted the coronavirus while they were in Texas. And they haven’t been back to North Carolina since, Brown said.

The data on the Texas patients was sent to the North Carolina Department of Health and Human Services to forward to the state of Texas so health officials there could follow-up, he said.

All data is kept on a spreadsheet with information on each COVID-19 case, including age, race, zip code and a list of pre-filled formulas to calculate raw data from what’s been entered by Meredith Litterell, the health department’s nursing director.

Brown, who has a background in Emergency Management Services, adds data regarding municipalities. He’s already familiar with various streets in the county, many of which don’t necessarily fall within a street within a town’s limits.

Public Health Director Nina Oliver will sign off on the data that is released before it hits public view.

The data hub team mostly works remotely, with some of them often working from home, a conference room or their respective offices.

All data shown in graphs on the data hub are channeled through a website called Infogram, where Brown begins the process of adding information. Colors for each individual piece of information starts with the county’s brand color, green, and its font.

April Everett, creative services manager for the county’s Information Technology Department, examines fonts and colors of each piece of data to ensure that it looks cohesive, Brown said.

Once the data is in place, Brown along with Everett, Assistant County Manager Randy Cress, and Columbus Hawks, county GIS manager, check over the data hub.

“We’ll all sit down and look at it and make sure it seems to be consistent with what we want,” Brown said.

Hawks will go over to the hub and do what Brown calls “the hard part,” which includes placing individual graphs, making sure they are spaced appropriately and the graphs are the same height. There is also a “test hub” so the team can see data before it goes live and take the hub offline to preview it. When the county added data for municipalities and moved the map to the bottom of the page, the team took the hub offline briefly so they could update or refresh information.

Brown said some residents who’ve regularly viewed the data hub may have noticed a login requirement, which means the hub is offline and likely being updated.

“When we work together so much, we’ve learned each other’s habits and what we don’t like,” Brown said.

Sometimes if Brown writes a news release, he’ll ask Everett to look it over, who he trusts to make needed changes. Brown said Everett has an eye for details.

Brown said there is “so many moving parts” in the process it can be easy to miss something. But Brown said he’s able to do what he does at the same time as handling other responsibilities because he knows there’s a team to support one another.

“I may mess that up and I know that between the two (Everett and Hawks) of them they will catch it,” Brown said.

With no baseball, Cannon Ballers concentrate on ways to give back

By Liz Moomey liz.moomey@salisburypost.com SALISBURY — The first pitch for the Cannon Ballers at the new Atrium Health Ballpark was... read more