With no baseball, Cannon Ballers concentrate on ways to give back 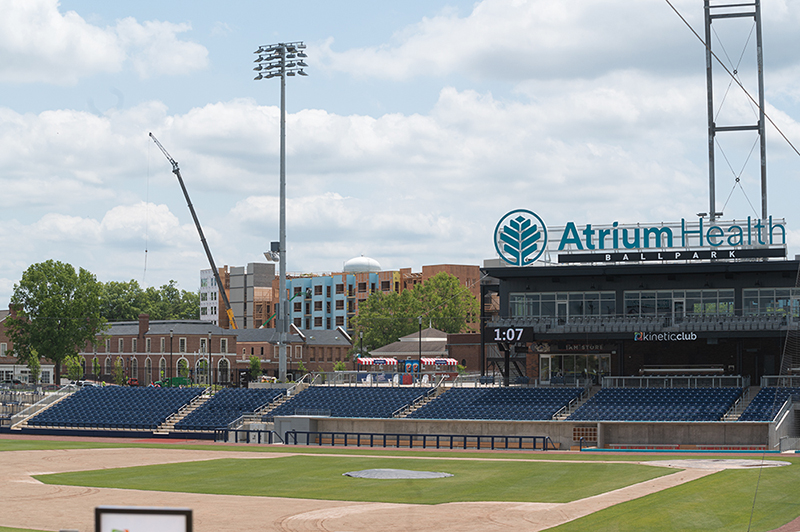 Josh Bergeron / Salisbury Post - The Kannapolis Cannonballers stadium recently opened to the public for takeout meals and for walkers and joggers. Baseball games aren’t yet being played because of the COVID-19 pandemic.

SALISBURY — The first pitch for the Cannon Ballers at the new Atrium Health Ballpark was set for April 16.

But as excitement was building and the stadium neared completion, Gov. Roy Cooper put the first pitch on an indefinite pause with a March executive order prohibiting mass gatherings.

Cannon Ballers General Manager Matt Millward and Scotty Brown, operating partner of Temerity Baseball, sat in the empty ballpark the night of April 16. No fans were there to join them and no players were on the field. People walking by stopped at the gate and looked in. The national anthem played on the loudspeakers.

“We would have really just come out of the box swinging with great weather, great facility, exciting baseball, great fan base, but that night was strange,” Brown said.

Even though the ballpark and staff were ready for that first day, months of planning had come to a halt.

The team is unsure about the 2020 season.

“It’s not looking great for us, but we’re staying optimistic,” Millward said. “Anything can happen.”

Major League Baseball has discussed plans to play with no fans. But there has been no word on the impact to the minor leagues. The Cannon Ballers are a Single-A Affiliate of the Chicago White Sox.

Millward said numerous logistics come into play. The home states of teams along the East Coast, for example, would have to follow the same guidelines. Travel to other ballparks would be costlier with the need for additional buses and hotel rooms to keep the team safe.

Most importantly, the Kannapolis team relies on fans for income since there are no major revenue streams from TV.

“We don’t have the option of playing in front of no fans,” he said. “Basically our livelihood relies on people in ballpark, fans in the ballpark through ticket sales, concessions, merchandise. Without any fans, our costs would only go up.”

In the interim, the team is working behind the scenes on creating a cashless ballpark and spacing out seating.

The ballpark also recently opened for people to walk around the 360-degree concourse. Concessions are being offered as takeaway food. That created excitement, though not at the same level that the baseball season would bring.

The lack of games also has allowed Cannon Ballers staff to have more time to give back. They have hosted blood drives and canned food drives as well as volunteering at food banks.

“Minor league baseball is so community-focused,” Millward said. “We wouldn’t be where we are without our fans and the support of our fans, whether it is raising funds or volunteering or just doing a fun contest on social media.”

Millward said they have started the process of setting up the Cannon Ballers Foundation, a 501(c)3, which should be ready by the fall.

Though the Cannon Ballers would be well into their season by now, the break has allowed the staff to settle in.

Brown said the extra time has allowed construction workers and the design team to fine tune the ballpark without the stress of thousands of fans around.